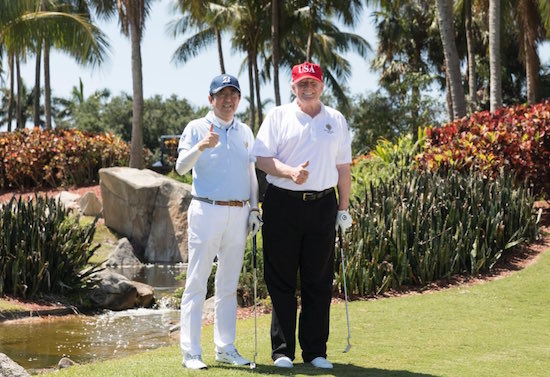 In one of the trillion tweets Donald Trump sent out this week, he complained about the FBI’s raid on Michael Cohen and the supposed death of the attorney-client privilege, and concluded, “All lawyers are deflated and concerned!” This particular lawyer, though, was still fully inflated after the raid, which was presumably approved at the highest levels of the Justice Department and by a federal magistrate judge, and was not in any respect repudiated by U.S. District Judge Kimba Wood when she heard Trump and Cohen’s complaints in court. Those are lawyers, too. They’re fine with it.

Less fine, though, is Donald Trump, who can’t find lawyers to defend his indefensible Russia / obstruction case, who obviously has a lot to hide, and who is reportedly “deeply rattled… infuriated … so upset, in fact, that he had trouble concentrating” on Syria.

It would all be kinda funny, if we weren’t talking about the president charged with protecting our national security and guiding our bright future. But we are, and it’s not.

This week Scaramucci’s New York restaurant, Hunt & Fish Club, is set to host a “Sugar Social,” where 25 “invited gentlemen” will enjoy drinks and dinner with 35 “stunning women.” An email hyping the gathering promises, “Sugar Socials are our solution to a relationship on your terms — upfront and honest arrangements.” According to Page Six, “Money typically does change hands.” Scaramucci’s publicist says her client isn’t responsible for this Sugar Daddy mess: “Some club rented out a private room. We neither condone nor endorse.” But you get paid! The Mooch!

Like Rick Scott (this week’s ranking: 36), Zinke’s environmentalism is targeted — politically targeted. Perhaps with an eye on running for higher office in Montana, the Secretary is all for doing the bidding of energy industry lobbyists and exploiting public lands — except in Montana.

That’s not the only way Zinke is awful. There’s also the Pruitt-like megalomaniacal entitlement and overspending. And CNN just unearthed a 2013 episode of Zinke’s radio show where he hosted a birther and raised questions about President Obama’s college records.

Broidy had to resign from his RNC post after it was reported that, through ace lawyer Michael Cohen (this week’s ranking: 14), he paid off his own pregnant Playmate mistress, to the tune of $1.6 million. (Unless, as some have theorized, Broidy, anxious to please the powerful POTUS, was taking the fall for another Trump escapade.) But Broidy already was disgraceful for making reported millions from unsavory foreign clients while suggesting, including to Russians, that he could offer access to Trump officials. Not to mention his 2009 guilty plea in a pension fund bribery case. UPDATE 04-19-18 10:00 pm: This.

In closed-door meetings in March during the annual session of the UN Commission on the Status of Women, Trump officials reportedly pressed for extreme views, including prioritizing abstinence over contraception — views that were further to the right than most other nations represented, including Arab states, Russia, and the Vatican.  Kozma, previously known for her opposition to transgender rights, reportedly called the U.S. “a pro-life country.”

Senators say they’re increasingly concerned about the classified information they are reviewing regarding Haspel’s record at the CIA. Extensive reporting indicates that Haspel was involved in the CIA’s use of torture in interrogations and in the destruction of videos showing agents waterboarding prisoners. Senator Ron Wyden charges that the agency “is doing everything they can to keep the facts from getting out. I believe there is a cover-up of her background.” Haspel’s hearing has now been delayed.

The trip to North Korea might be OK, depending on what happened. But despite his efforts to be charming and list his hobbies and turn-ons before the Senate, Pompeo did not allay concerns about his boneheaded views on Iran and on torture, his bigotry toward Muslims and LGBT people, his seeming unwillingness to reign in Trump’s awful tendencies, or his own shaky credibility, and Democratic senators are lining up against him.

As you know, Trump’s “shadow chief of staff” attacked the Justice Department raid on Michael Cohen without disclosing that Michael Cohen is also his lawyer. Then he told a flimsy story: “I never retained his services, I never received an invoice, I never paid Michael Cohen for legal fees. I did have occasional brief conversations with Michael Cohen — he’s a great attorney — about legal questions I had, or I was looking for input and perspective.” He continued, “My questions exclusively almost focused on real estate…. I might have handed him 10 bucks … ‘I definitely want your attorney-client privilege on this.’ Something like that.”

Fox News is standing by Hannity because of course they are. With Ailes and O’Reilly gone, Hannity sets the standard of integrity for the network, which is to say, no integrity.

McConnell says the Mueller investigation should go forward, but he told Fox Business regarding legislation to protect the probe, “I’m the one who decides what we take to the floor. That’s my responsibility as the majority leader. And we will not be having this on the floor of the Senate.” So if Trump fires Mueller or Rosenstein, McConnell likely will hide in his office. And he will be just as responsible as Trump for the existential threat to our democracy.

Another week of revelations about Pruitt’s appalling grifter act: new reports from GAO and the EPA inspector general on the $43,000 cone of silence and on the huge raises for pet employees — reports that underscore how Pruitt’s EPA has bent rules to satisfy the administrator’s greedy appetites. Plus Pruitt upgraded to a more expensive SUV with bullet-resistant covers for the leather bucket seats, and he had a luxury Colorado condo stay paid for by homebuilders who are seeking EPA policy changes, and whom Pruitt invited to DC, where he instructed staff to treat them as the agency’s “customers.”

OMB is now also investigating Pruitt, but so far Trump is standing by his fellow con artist. Pruitt is reportedly trying to change the subject by again pushing his “red team-blue team” attack on climate science, now that at-least-semi-rational White House energy policy aide Michael Catanzaro is leaving to cash in.

Aided by unimpressive-old-guy-at-Connecticut-cocktail-party Larry Kudlow (this week’s ranking: 23), Trump threw Nikki Haley under the bus after, naturally, he backed off the new Putin sanctions she had already announced.

Trump reportedly phoned Michael Cohen, on the day of his first court date, last Friday, to “check in.” Just like our moms call to check in.

Trump pardoned Scooter Libby, presumably because John Bolton (this week’s ranking: 15) asked him to, and possibly also as gesture of warmth to Paul Manafort, Michael Cohen, and others contemplating the meaning of loyalty.

Cornered and losing his composure, Trump has never been dumber on Twitter.

Before the Syria bombing, Trump offered a feeble response to criticism that he had announced the attack in advance (missiles “will be coming, nice and new and ‘smart!'”), and then he lamely demanded gratitude from the world: “Never said when an attack on Syria would take place. Could be very soon or not so soon at all! In any event, the United States, under my Administration, has done a great job of ridding the region of ISIS. Where is our ‘Thank you America?'”

After the Syria bombing, Trump was dumb enough to tweet “Mission Accomplished!” and then dumb enough to think anyone smart would believe him when he tweeted, “I knew [critics] would seize on this but felt it is such a great Military term, it should be brought back.” He knew.

Trump tweeted attacks on James Comey. A few. Did it seem like Comey had gotten under his skin? Trump called Comey “a proven LEAKER & LIAR,” “a weak and untruthful slime ball,” and “the WORST FBI Director in history, by far!” He declared that Andrew McCabe “LIED! LIED! LIED! McCabe was totally controlled by Comey – McCabe is Comey!!” And he claimed that Comey was not fired because of the Russia investigation, even though he told Lester Holt and the entire world soon after the firing, “when I decided to just do it, I said to myself, I said ‘you know, this Russia thing with Trump and Russia is a made-up story.'”

Trump stupidly waded into the Stormy Daniels’ story, tweeting that Daniels’ account of being threatened in a parking lot by a man who said “Leave Trump alone” was a “total con job.” (Not enough people have digested this story.)

In the kleptocratic emoluments department, we learned that Trump’s businesses — hotels, airplanes, golf courses, bottled water — have received at least $15.1 million from political groups and federal agencies since 2015, according to records tracked down by Public Citizen. Most of that — $13.4 million — was spent by the Trump campaign, with another $717,000 from the RNC and $595,000 from the joint RNC-Trump campaign fundraising committee.

And courts keep telling Trump he’s violating the law, this week on the military transgender ban. UPDATE 04-19-18 3:00 pm: And on the termination of grants for teen pregnancy prevention.