Pruitt’s Successes, Like Pruitt’s Offenses, Are Rooted in Corruption

posted at 1:03 pm by David Halperin 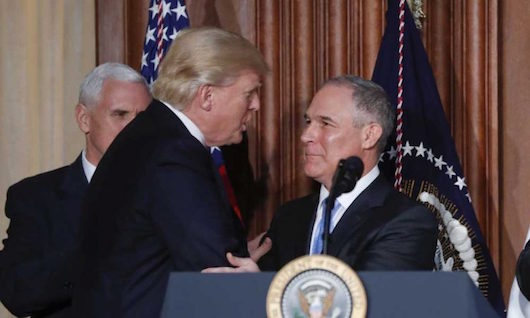 Scott Pruitt is under heavy fire for an unbelievably long list of ways that he’s sought to wrap himself in luxury and security while running the EPA. The list includes, so far, regular first-class flights, private jets, frequent trips home to Oklahoma, questionable overseas travel, a troubling Paris layover, a soundproof booth in his office, a requested bulletproof desk, 20 staff committed to the 24/7 security detail everywhere he goes including personal trips to Disneyland and the Rose Bowl, a $50-per-sleepover sweetheart condo rental from a lobbyist’s wife, a middle-of-the-work-week nap in the $50-per-sleepover rental that spurred his security detail to break down the door, a siren-blaring motorcade to a fancy French dinner at DC’s Le Diplomate, the bypassing of the White House to give raises to close aides, the reported extensive absenteeism of recently-resigned top Pruitt aide Samantha Dravis, and the demotion and dismissal of senior EPA staff who questioned Pruitt’s spending and security demands.

Obviously the concern here is corruption — that the hyper-entitled Pruitt is spending way too much of the taxpayers’ money on his own personal comfort, convenience, and pleasure; and also, in the case of the condo deal and possibly the Rose Bowl trip, that he is getting personal benefit from special interests that want to curry favor with him and influence EPA decisions.

President Trump and conservative organizations have rallied to Pruitt’s side. But rather than focusing on defense of Pruitt’s indefensible over-spending, they are implying that these transgressions should be overlooked because Pruitt is doing such valuable work implementing policy and enforcement changes at the EPA. Trump tweeted, “While Security spending was somewhat more than his predecessor, Scott Pruitt has received death threats because of his bold actions at EPA. Record clean Air & Water while saving USA Billions of Dollars. Rent was about market rate, travel expenses OK. Scott is doing a great job!” Meanwhile scores of conservative activists released a statement praising Pruitt and listing numerous actions Pruitt has taken to roll back environmental regulations and commitments, including the Paris climate agreement.

But the actions that Trump and conservatives insist outweigh Pruitt’s spending offenses are, in fact, much larger, more damaging manifestations of Pruitt’s essential corruption.

Pruitt’s rise from Oklahoma state legislator to state attorney general to EPA chief has been fueled by his willingness at every level to do the bidding of fossil interests, to mold policy to the wishes of the most polluting oil, gas, coal, and chemical companies.

As a legislator, Pruitt was active in the controversial American Legislative Exchange Council, a business lobby backed by Koch Industries and other energy companies. Harold Hamm, the billionaire who runs the oil and gas giant Continental Resources, co-chaired Pruitt’s 2014 re-election campaign for attorney general. Pruitt became chairman of the Republican Attorneys General Association, which is heavily financed by fossil fuel and corporate interests.

As Oklahoma AG, Pruitt repeatedly sued the Obama EPA, sometimes alongside corporate supporters like coal giant Murray Energy, and, in sending letters to the EPA and other federal agencies complaining about regulations, he cribbed language, almost word for word, from drafts provided by Oklahoma oil and gas company Devon Energy.

As EPA head, Pruitt has rarely met with environmental advocates but has frequently sat down with fossil fuel and other corporate executives and lobbyists, often before rendering decisions that benefit those special interests. The Washington Post has documented numerous examples of Pruitt meeting with representatives of mining, automobile, oil, utility, and agriculture groups and then giving those lobbyists exactly what they wanted. Pruitt traveled to a luxury resort in South Carolina to address the American Chemistry Council, an industry lobbying group that has been getting the policy changes it wants, on issues from toxic chemical use to chemical plant safety, from Pruitt’s EPA. Pruitt has selected as his number two, the deputy administrator at EPA (pending Senate approval this week), Andrew Wheeler, previously Murray Energy’s top DC lobbyist.

Pruitt would likely expect the support of those same special interests as he eyes higher office; reportedly he has his eye on the U.S. attorney general job, the Senate seat that 83-year-old James Inhofe (R-OK) may vacate in 2020, perhaps even the White House.

While elite conservative leaders, many of whose operations get support from fossil fuel and other corporate interests, are aggressively trying to save Pruitt’s career, there is little evidence that people at the grassroots much care. Why should they? If your home is near the coasts or the gulf, if you live or work near toxic chemicals, if you make your living farming or fishing, if you enjoy the beauty of our lands, you have no reason to celebrate Pruitt actions that accelerate pollution and global climate change. And if you’ve cast your votes in recent elections in part aimed at draining the D.C. swamp and reducing the corruption of our politics by special interests, why would you stand by Pruitt, this parasite of taxpayer dollars, this swampiest of swamp creatures?

While oil baron / Pruitt patron Harold Hamm has reportedly called Trump to urge him to keep the EPA head, the oil, gas, coal, and chemical companies — the real beneficiaries of Scott Pruitt’s corruption — have said remarkably little in public to defend Pruitt as his scandal has mounted. Although they surely will keep financing Pruitt’s campaigns for higher office if he survives, for now their high-paid public relations advisers are smart enough to steer them away from embracing such a shamelessly dishonorable grifter posing as a public official.

WATCH Scott Pruitt struggle to defend himself on Fox News: