posted at 6:30 pm by David Halperin 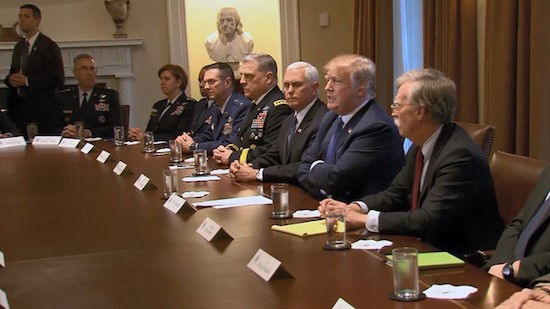 “It’s a disgrace. It’s, frankly, a real disgrace. It’s an attack on our country, in a true sense. It’s an attack on what we all stand for,” Donald Trump told reporters, with his generals, his new national security walrus, and his faithful VP lapdog at his side. But, sadly, Trump wasn’t talking about Bashar al-Assad’s chemical attack on Syrian children. Or Russia’s cyber-attack on the 2016 election. Instead the self-pitying POTUS was describing the FBI raid, with a search warrant approved by senior Justice Department officials and signed by a federal judge, on Trump fixer Michael Cohen.

We all know how helpful Princess Ivanka has been to causes like women’s empowerment, LGBT rights, and the environment. But did you ever notice how often she says “I am incredibly proud of” her father, her own alleged accomplishments, or whatever? It’s dumb-speak — you find it incredible how proud you are? But prick up your ears and you’ll notice all the Ivanka-wankabees who use the phrase these days: Mike Pompeo, at least twice in his confirmation hearing Thursday, Nikki Haley, Paul Ryan, Eric, POTUS…

Johnny got a huge promotion after presiding over the sleazy White House personnel office, where incompetent frat boys and girls vaped and drank Smirnoff Ice, and where those hired for administration jobs included multiple relatives from the same family and people with arrest records for drunk driving, underage drinking, passing bad checks, assault, disorderly conduct, and fleeing an officer.

Eleven U.S. senators are asking why the Department of Education, along with the IRS, are standing by while predatory for-profit colleges are using bogus conversions to non-profit status as licenses to keep fleecing students and taxpayers. Betsy DeVos has made clear that she just doesn’t care. She only wants to help the scam colleges whose former executives staff her department — No Shill Left Behind.

Grandiose bigot Bannon, having triumphed with the election of Roy Moore to the Senate, the masterful manipulation of Michael Wolff that led to a White House promotion, and the growing reputation for excellence of the firm he once helped run, Cambridge Analytica, has a new idea for Trump: fire Rosenstein and gut Mueller. Fucking brilliant.

Congratulations, Paul Ryan, you’ve capped your public service career by collaborating with, validating, and protecting a vile, bigoted, misogynist con artist in order to deliver tax cuts for your donor base and drive the budget deficit into the stratosphere.

The fixer for the con man got raided. We know Cohen was involved in the deals to silence Stormy and Karen, but as to the $30,000 payment to shush up the doorman who heard a rumor, he says he spoke to the National Enquirer only as a Trump spokesman and not as a deal-maker. We hope federal prosecutors will find out more from Cohen’s files about, for starters, the Podesta email leak, the Sater-Moscow Trump Tower talks, and the Sater-Ukranian peace proposal intended for national security adviser Flynn.

Bolton’s getting rid of rational White House staff quick so he and Trump can run a national security nuthouse.

Pompeo clearly spoke only of the Pompatus of Love when giving POTUS briefing. He played our needy president like a fiddle, using flattery to become his favorite. On war and peace matters, Pompeo, we fear, will pair with new frenemy Bolton in recklessly sucking up to Trump and goading him into “tough” positions, rather than containing his incompetence and impulsiveness.

Pruitt has been revealed to be an absolutely disgraceful, hilariously entitled, low down grifter, grabbing up luxury at taxpayer expense, shoving aside those who try to curb his abuses, and doing the bidding of the wealthy fossil fuel and chemical industry interests that have financed his rise. Did we mention that his newly-confirmed deputy is a coal lobbyist? Or the souvenir coin?

Richard Nixon was a president who became a crook. Donald Trump is a crook who became president. And now, as the Mueller team, the Manhattan U.S. attorney’s office, and others in the Justice Department seem to be closing in on the crookedness in the Trump inner circle, with the raid on (so-far) loyal fixer Michael Cohen coming on top of the cases against Manafort, Flynn, and Gates, Trump seems to be losing his mind: mostly hiding, firing people, and focusing public pronouncements on attacking Mueller, musing about firing Mueller, promoting videos calling for the firing of Mueller, denying he is firing Mueller, threatening to attack Syria, and blaming the war in Syria on Mueller.

All this talk about the Mueller probe being inherently unfair, JFC. The two special counsels who investigated Nixon were Democrats, and the two who probed Clinton were Republicans. That was deliberate – to ensure independence. Trump somehow gets a prosecutor from his own party, yet he still complains it’s unfair. It’s actually fair.

It’s bad enough that Trump’s malevolence and corruption poses one of the most serious threats to our democracy in U.S. history, but the Trump soap opera also means that most serious domestic policy decisions have been corruptly delegated (through Mike Pence and various federal agencies) to wealthy special interests — oil companies, banks, for-profit colleges — or are ignored entirely. And our national security is imperiled by Trump’s ignorance, incompetence, narcissism, impulsiveness, and instability.