posted at 6:28 pm by David Halperin 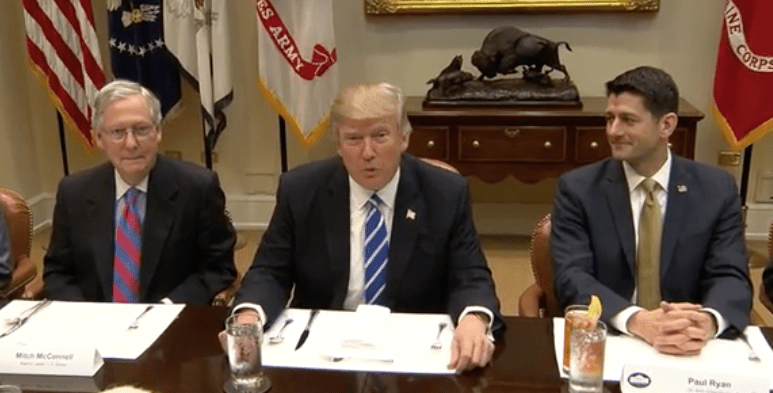 Y’all, Trump world is on the verge of eclipsing the United States of America, unless Mitch McConnell and Paul Ryan get their heads out of their donors’ whatevers and stand up for our democracy.

Will they? Maybe not. Get ready.

10. John Dowd, outside counsel to the President. Last week’s ranking: —

Indiscreet, poor-judgment, bumbling Trump Russiagate lawyer John Dowd took the latest step toward signaling an authoritarian coup when he emailed reporters in the wake of Jeff Sessions’ firing of FBI deputy director Andrew McCabe that he “pray[ed]” Rod Rosenstein would follow Sessions’ “brilliant and courageous example…. and bring an end to alleged Russia collusion investigation manufactured by McCabe’s boss James Comey based upon a fraudulent and corrupt dossier.” Initially Dowd said he was speaking for Trump but later said he was speaking only for himself. The man is a buffoon, of course, but, in the context of Trump calling for the same action with increasing intensity, also a menace.

These five — the first four on the Senate banking committee, and the fifth, you may barely remember, the Democratic Party’s vice president nominee in 2016 — stand out among Democrat senators, in thrall to campaign contributions to the party from big banks, who helped the Senate pass, 67-31, Idaho GOP senator Mike Crapo’s bill to roll back protections for consumers and financial stability against reckless, dishonest, and racially discriminatory behavior by financial institutions.

Kushner’s reprehensible lack of ethics standards as a White House official are mirrored in ugly misconduct by the Kushner Cos. The latest: AP reports that Jared’s business regularly filed documents with New York City falsely stating that it had zero rent-control tenants in buildings it owned; in fact there were hundreds such tenants. Such false filings allowed the company to avoid stricter government oversight, and tenants were subjected to endless drilling and other construction possibly aimed at driving them out of the Kushner buildings so Jared and family could get on with making more money.

When Joel Klein told Jamie Gorelick that “Jared was a good person,” had he done his due diligence?

With a disgraceful record of abandoning environmental protections, sucking up to fossil fuel interests, and wasting taxpayer money on his own pricey travel and paranoid security and secrecy measures, Pruitt apparently thinks he may be headed to the White House in 2025. His insanely shameless press office last week issued a release for the sole purpose of promoting an insanely slavish pro-Pruitt op-ed written by Tim Huelscamp, an ex-congressman and current president of the climate change denial group the Heartland Institute. The piece is entitled, “Scott Pruitt is leading the EPA toward greatness” and begins, “In the first season of Donald’s Trump ‘Presidential Apprentice,’ there’s no question who the star hire of his administration has been: EPA Administrator Scott Pruitt.” Gag me with a contaminated spoon.

Bannon and Mercer invested in and drove the data firm Cambridge Analytica, which, it turns out, played Facebook officials in order to improperly harvest private information from 50 million users of the social network, laying the groundwork for the company’s efforts on behalf of the Trump campaign. Wikileaks man Julian Assange has said Cambridge Analytica CEO Alexander Nix asked him during the campaign for help getting Hillary’s emails. In 2014, a lawyer advising Cambridge Analytica reportedly warned Bannon, Mercer, and Nix that the involvement of foreign nationals on the Cambridge Analytica team could violate U.S. election laws. With a mess like this, I’d bet there will be more revelations. UPDATE 03-19-18 3:00 pm: Indeed.

We don’t know the basis for a Justice Department inspector general finding that Andrew McCabe showed a “lack of candor’’ in discussing media contacts. But Sessions’ firing of McCabe just hours from his eligibility for full retirement benefits seems either a way of giving the green light to Trump for a renewed POTUS attack on the Mueller investigation or a gross miscalculation that slapping McCabe would satiate Trump for now. Either way, disgraceful.

Nunes has grossly abused his position as chairman of the House Intelligence Committee to create disinformation aimed at undermining the Mueller probe, and now he has reached a new level of disgracefulness by announcing on behalf of committee Republicans that their own probe is over because Trump is innocent.

The GOP congressional leaders, if they care a whit for the republic forged in 1776 and 1789, and for the people of this country,  should speak out forcefully against Trump’s latest attacks on Mueller. They should immediately pass a law protecting the Russiagate investigation. Instead their virtual silence signals Trump that they won’t stand up to him if he ends the probe. The complicit duo are loving the tax cuts and de-regulation they’re delivering to their wealthy donors, so they’ll keep empowering and emboldening a thieving autocrat in the White House.

Corrupt Donald Trump has driven our nation to the brink of a full-fledged crisis.

Since Sessions fired McCabe, an unhinged Trump has tweeted lie-filled attacks on McCabe, James Comey, the FBI, the Justice Department, the State Department, and the Mueller investigation. He’s clearly ready to pull the trigger.

UPDATE 03-18-18 9:00 pm: Tonight, White House lawyer Ty Cobb issued this statement: “In response to media speculation and related questions being posed to the Administration, the White House yet again confirms that the President is not considering or discussing the firing of the Special Counsel, Robert Mueller.” So we’re cool.

You could almost forget some of the other atrocities Trump brought forth this week.

For whatever reasons — a quid pro quo, money, blackmail, fear, or a sincere love of authoritarian governance — Trump still won’t criticize or seriously counter Putin, despite all the blatant and urgent threats Putin presents to our country and allies.

Trump fired his bizarrely incompetent, remote choice for secretary of state, Rex Tillerson, but he seemed to do so for all the wrong reasons — because Tillerson pointed the finger at Russia, questioned Jared’s unquestioning embrace of Saudi Crown Prince Mohammed bin Salman, and opposed the hasty trashing of the Paris climate accord and the Iran nuclear deal. Then the White House fired Under Secretary of State Steve Goldstein for telling the truth about the shoddy way Trump handled Tillerson’s firing, and replaced Goldstein with former Fox & Friend Heather Nauert. And reportedly replaced Tillerson with Princess Ivanka for an upcoming critical meeting with the South Korean foreign minister.

Trump’s dwindling team increasingly consists of  favorite Trump cable talking heads like Nauert and new economic advisor Larry Kudlow. He also likes Pete Hegseth, another Fox & Friend whom the network has been dangling in front POTUS to replace Veterans Affairs Secretary David Shulkin; Hegseth is apparently ready to fulfill the Koch brother dream, which Shulkin opposes, of turning over the veterans health care system to private companies. (Lately, Trump also seems weirdly into commenting publicly about men he finds attractive, from Kudlow, to Justin Trudeau, to  Conor Lamb, to, of course, himself.)

Trump’s bragging at a donor event that he made up trade deficit data in talking with Trudeau is another piece of ugliness.

Did you know, also, that Trump has forced his senior staff members to sign lifetime nondisclosure agreements, including millions in penalties owed to the government for sharing internal discussions, even though such agreements are almost certainly enforceable given the First Amendment? In the same tradition, Trump’s lawyers are threatening Stormy Daniels with $20 million in damages.

And in the latest indicator that Trump has turned America into a kleptocracy, we learned that in the first six months of this presidency, the Department of Defense spent $138,000 at Trump properties. And the top oil trade group held their two-day board meeting at the DC Trump hotel before going to the White House to lobby Trump — we were glad to spend money at your hotel, now let’s #MAGA together.

But mostly right now there’s the existential threat from a U.S. president seemingly ready to shut down a serious investigation into whether that president violated the law — and into how Russia attacked our democracy.