posted at 2:46 pm by David Halperin 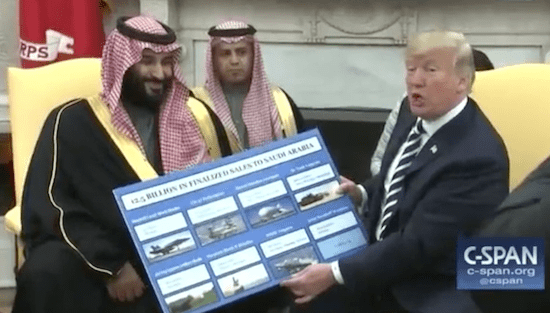 People are standing up to him, abandoning him, rejecting him, mocking him, informing on him; Bob Mueller and ladies are closing in; and Donald Trump’s all: everything’s great here, I’m very happy with my team, everyone wants to work for me, believe me. Um, defensive much?

Put on the spot before a House committee, Carson blamed his wife for the $31,000 dining set. Apparently, he later was advised that was a horrible thing to do, and he backed off. Carson may have received his BA from Yale and MD from Michigan, but he apparently got his Certificate in Chivalry from Trump University.

Doing the bidding of big U.S. junk food companies, and ignoring the dangers of the global obesity crisis, Lighthizer’s team is seeking to use U.S. trade negotiations with Mexico and Canada to limit all three nation’s abilities to warn consumers about unhealthy foods. Gross.

In the wake of perhaps the biggest single-day protest in U.S. history, in which survivors of gun violence boldly advocated for tougher firearms laws to save lives, Santorum said Sunday that Marjory Stoneman Douglas High School students should have responded to the slaughter of their classmates by “taking CPR classes” instead of “looking to someone else to solve their problem.” Their problem?

7. John Dowd, outside counsel to the President. Last week’s ranking: 10

Goodbye to buffoon Dowd, who made the countdown last week for emailing reporters, after Andrew McCabe was fired, that he prayed Mueller would shut down his probe. Previous Dowd highlights included forwarding a racist email, yelling his legal strategy across the table at a downtown DC restaurant, and working with Trump on a tweet that gave the game away on the Michael Flynn firing.

Dowd finally parted with Trump, reportedly over the question of whether Trump should submit to testimony before Mueller, which Dowd apparently opposed. This dispute was portrayed as cautious Dowd versus reckless Trump. But the only ways Trump ultimately could resist being questioned would be to assert a nonexistent constitutional privilege or else take the 5th — neither a very savory approach for a president of the United States. Sitting presidents Reagan and Clinton negotiated terms, but each testified when called. Dowd’s reported position was lawless.

Trump has disgracefully stiffed a lot of people on debts, but if Trump stiffs Dowd on his fee, for once that might be cool.

DeVos finally faced a House committee and demonstrated, again, that she has no idea what she’s talking about. As in her Senate testimony last year, she repeated meaningless phrases over and over without answering questions. She couldn’t explain her Department’s disgraceful effort to prevent states from safeguarding their students against student loan company abuses, or its moves to abandon civil rights protections. And it turns out the gun “commission” Trump created is just DeVos and three other cabinet secretaries.

Grandiose bigot Bannon claims he doesn’t remember Cambridge Analytica buying Facebook data, and didn’t know about misuse of that data,  even though he was the company’s vice president and part owner. He won’t respond to questions about Cambridge Analytica hiring foreigners for substantive U.S. campaign work, in possible violation of federal law. He blames the media.

Allegedly scared of possible coach class seatmates who dislike his wholesale dumping of environmental protections, Pruitt spent more than $105,000 on first-class flights during his first year on the job, and his security detail also got to sit up front, so the bill is even bigger. And newly-released records show still more expensive Pruitt flights. Pruitt also flew to the Rose Bowl to see Oklahoma play Georgia (Pruitt’s daughter was an OU cheerleader, class of ’17), but we don’t know how much it cost taxpayers, whether he accepted corporate hospitality, or with whom he met, because Pruitt’s EPA hasn’t responded to Freedom of Information Act requests. We do know that Pruitt is using EPA to grant special favors to fossil fuel companies and other polluters.

Bolton moves into the Terrible 10 right away, before he’s even moved into the national security adviser’s corner office, because of his sheer awfulness and the irresponsibility of his positions: He pushed and still loves the disastrous Iraq war, he’s called for bombing Iran and North Korea. Oh, and Bolton, who dropped out of the 2016 presidential race in May 2015, is a former client of Cambridge Analytica. In late 2016, trying to get a top administration job, Bolton even sucked up to Trump by doubting the Russia role in hacking our election. That suggests that, like Mike Pompeo, Bolton is willing to flatter and indulge Trump while acting all tough — an approach that could prove extremely hazardous to our security. We had better pray that Trump doesn’t replace General Mattis with Sean Hannity.

As New York City started probing false statements and harassment of rent control tenants by the Kushner Companies that allegedly occurred while Jared ran the business, and as the Cambridge Analytica scandal recalled Jared’s enthusiastic support for hiring the data company, the Trump Prince is also in trouble for possible ugly mixing of his business interests with his White House role. Reporting indicates that around the time that Qatar turned down the Kushner Companies for a major loan, Jared pushed the White House to side firmly with Saudi Arabia and the United Arab Emirates in their dispute with Qatar; that Jared gave newly-empowered Saudi Prince MBS the names of Saudis opposed to him; and that MBS boasted that Jared is in his pocket.

We’ve also been learning that UAE interests have been aggressively pushed to the Trump White House by two lovely businessmen who met during the Trump inauguration: Elliott Broidy, a vice chairman of the inauguration finance committee, who pled guilty in a 2009 pension fund bribery case, and George Nader, who has a 2003 Czech Republic conviction and prison sentence for sexual abuse of ten minors. Broidy has reportedly made millions from unsavory foreign clients while suggesting, including to Russians, that he could offer access to Trump officials. Nader, who may have helped funnel cash from U.A.E. interests to GOP political committees, was intercepted at the the airport earlier this year and is reportedly cooperating with Mueller.

At an event with millennials last week, asked what advice he would give his 25-year-old self, Trump offered this inspirational message for America’s youth: “Don’t run for president.” He explained, “All my life, I’ve gotten really — look, we all get a knock. But I got the greatest publicity. I was getting such great until I ran for office.” And there it is, your profile in courage. The purpose of life is to get great publicity, and being president is messing that up. Even though everything is going great.

In the wake of his bungled, failed effort to add conspiracy theorist Joe diGenova to his group of lawyers, Trump tweeted, “Many lawyers and top law firms want to represent me in the Russia case…don’t believe the Fake News narrative that it is hard to find a lawyer who wants to take this on. Fame & fortune will NEVER be turned down by a lawyer, though some are conflicted. Problem is that a new … lawyer or law firm will take months to get up to speed (if for no other reason than they can bill more), which is unfair to our great country – and I am very happy with my existing team.” Meaning your existing personal legal team Jay Sekulow, a religious rights mouthpiece who isn’t a criminal law specialist?

Trump reportedly had not really researched diGenova’s background or consulted with chief of staff John Kelly or White House Counsel Donald McGahn on the decision, which was really dumb because diGenova’s law partner wife had an obvious conflict of interest.

Everything is going great, such as that Stormy Daniels and Karen McDougal unburdened themselves to Anderson Cooper about how they were tricked and manipulated into hush money deals by Trump henchmen, and, in the case of Daniels, allegedly threatened into keeping quiet.

Daniels’ account indicated that Trump used the possibility of getting her on “Celebrity Apprentice” as bait to get her to have sex. On their second meeting, Daniels left without giving it up, and Trump called soon after to say that somehow “Celebrity Apprentice” couldn’t happen. Daniels also said she was threatened in a parking lot by a guy who said “Leave Trump alone. Forget the story,” and then gazed at Daniels’ infant daughter and remarked, “That’s a beautiful little girl. It’d be a shame if something happened to her mom” before disappearing. This account sounds suspiciously like a really bad gangster movie until you remember who we’re dealing with. This is a really bad gangster movie. I’ll bet Trump’s Mar-a-Lago dinner Saturday night with Michael Cohen was chock full of great dialogue.

Trump’s telephone dialogue with Vladimir Putin was also hideous, with Trump congratulating the authoritarian leader on his “victory” in a sham election and then boasting about the call with cameras present in the Oval Office — despite instructions from his national security staff that read, “DO NOT CONGRATULATE.” Disgraceful press secretary Sarah Huckabee Sanders (this week’s ranking: 12) later elaborated, “We don’t get to dictate how other countries operate…. What we do know is that Putin has been elected.”

In the wake of congratul-gate, Trump dumped national security advisor H.R. McMaster for Bolton, just days after Sanders had insisted McMaster’s job was safe. Trump obviously found McMaster annoying, especially when last month the general said at a security conference in Germany that the evidence of Russian interference in the 2016 election was incontrovertible — leading to a Trump rebuke in Twitter, the one that ended with these historic words: “the only Collusion was between Russia and Crooked H, the DNC and the Dems. Remember the Dirty Dossier, Uranium, Speeches, Emails and the Podesta Company!”

Also earning a Twitter rebuke this week was Joe Biden, for saying that he would have beat up Trump in high school. According to the President of the United States, Biden “is weak, both mentally and physically, and yet he threatens me, for the second time, with physical assault. He doesn’t know me, but he would go down fast and hard, crying all the way.” Lincolnesque!

It was Trump who passive-aggressively cried and whined about the budget bill he was signing at a self-announced “News conference” at which he did not take questions.

Trump’s other actual action last week was his ugly imposition of a near-ban on transgender troops in the armed forces. On the one side of the debate was the civil rights and human dignity of transgender troops, as recognized by multiple federal courts, and the demonstrated importance for national security of the service of these troops, as recognized by military leaders. On the other side was simply the bigotry of Trump and the GOP, and, disgustingly, that mostly prevailed.

And Public Citizen has just identified dozens of Trump staff appointments that appear to violate ethics rules designed to limit the hiring of lobbyists.