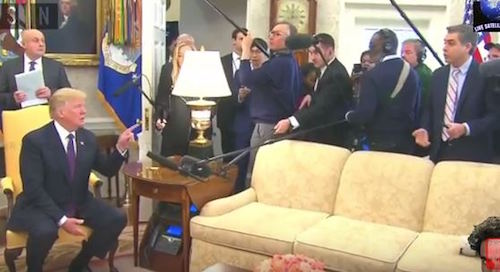 I will be announcing THE WORST PRESIDENT OF ALL TIME AWARDS on Wednesday at 5:00 o’clock. Subjects will cover Dishonesty, Corruption, Bigotry, Misogyny, and Incompetence. Stay tuned!

We took a holiday break, and then decided to stop publishing this feature once and for all. But then, oh lordy. It writes itself.

While he’s no Dr. Harold N. Bornstein, Dr. Jackson seemed to have contracted a bit of MAGA fever, hyping up Trump’s health by (1) declaring the president by to be 6’3″, when his driver’s license has listed him as 6’2″, and thus narrowly keeping him out of an “obese” designation; (2) saying the president was in “excellent” cardiac health, even though he’s on cholesterol medication, has evidence of heart disease, is sedentary, and is at least borderline obese; and (3) chalking up Trump’s condition to “incredibly good genes” and complimenting him for having “a lot of energy and a lot of stamina” — all ways that Trump has regularly praised himself.

Set for a Senate committee vote Wednesday morning, the former president of the U.S. division of drug company Eli Lilly has offered no plan for lowering prescription drug prices, declined to commit to increased funding for communities devastated by the opioid epidemic, backed Trump’s plan for sabotaging Obamacare, and declared that a woman’s employer should be able to decide whether birth control should be covered by insurance.

Sanders helped educate our schoolchildren by explaining that Trump couldn’t be racist, because, if he was, “why did NBC give him a show for a decade on TV?”

Leaving Breitbart is cool with Bannon, OK? Gives him more time to run for president against Trump and Oprah, OK? And refuse to answer questions from Congress, OK? But maybe the subpoena will convince him to talk with Bob Mueller.

Oil drilling off all U.S. coastline is awesome, except that Florida is “unique,” because it has coastline. And also because Governor Rick Scott is running for Senate and people don’t like drilling off their coastline.

Nine of the twelve members of Interior’s National Parks System Advisory Board jointly resigned Monday to protest Trump-Zinke policies they charge have disregarded science and the threats of climate change and environmental destruction.

Her Department continued its disgraceful march toward dismantling Obama-era protections for veterans and low-income students abused by predatory for-profit colleges, proposing rules — urged by the worst behaving colleges — that would impose on defrauded students seeking debt relief one of the highest burdens of proof ever demanded against the government. Like lobbyists for the predatory schools, DeVos has vilified the victimized students, suggesting they are scam artists.

Nielsen not acknowledging to Senator Dick Durbin that Norway is majority white is just plain silly; but her testifying under oath that she could not recall Trump referring to African nations as “shit” is disgraceful. This brand-new cabinet secretary defiled public service and integrity in pursuit of her career ambitions. Nielsen rolling her eyes at Senator Cory Booker (D-NJ), who had delivered an impassioned statement about Trump’s racist conduct, added to the ugliness. How much you wanna bet bigoted Trump chief of staff John Kelly phoned his protege Nielsen after the Senate hearing and called Booker an “empty barrel“?

DACA has reaffirmed that the supposed world’s greatest negotiator can’t negotiate his way out of a paper bag, and that the supposed world’s least racist person makes Archie Bunker look like Joan Baez. Trump capped off this reprehensible performance by imperiously ordering an offending CNN reporter “OUT!” of his Oval Office for asking too many questions about the matter.

If Trump doesn’t have cognitive issues, well then he’s just an s-hole, a very stable (albeit textbook generic) genius who parks a truck to hide his endless golfing from the public, who golfs on MLK Day where other presidents did public service, and who slams NFL national anthem protests but hasn’t even bothered to learn the damn words to the thing.

The announced expulsion of 200,000 Salvadorans who have lived here for decades and contribute so positively to our society and economy is one of the ugliest, stupidest Trump moves so far.

Corporations, foreign governments, and political groups continue sucking up to Trump by spending big at his emolument properties, adding to the picture of this POTUS as the most corrupt and unethical ever.