posted at 5:15 pm by David Halperin 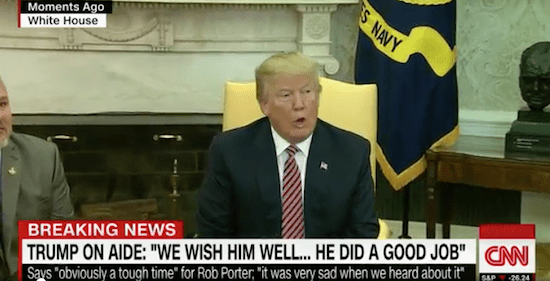 Instead, somehow, we have a corrupt, bigoted, incompetent child sitting in the big chair in the Oval Office. And a bunch of other real winners on his team. Huh.

Trump pal and slumlord Barrack chaired the Presidential Inaugural Committee, whose financing celebrated the return of blatant corporate corruption of Washington. The committee raised an unprecedented $107 million and repeatedly promised to donate excess funds to charity.  More than a year later, the committee finally fessed up: $5 million to charity — $3 million for hurricane relief, $250,000 to the Smithsonian, and $1.75 million to decorate the White House and the vice president’s house — and meanwhile almost $26 million to an event planning business started six weeks before the inauguration by one Stephanie Winston Wolkoff, a long-time friend of, and now “unpaid” senior adviser to, Melania Trump. Another $100,000 went to Trump deputy campaign manager Rick Gates, since indicted for money laundering by Robert Mueller.

In India to corruptly make money trading on his father’s position, idiot Don Jr. took time out to disgracefully endorse false tweet attacks on one of the Parkland students.

DeVos’s Department of Education last week affirmed their bottom-line positions on a regulation to repeal and replace the Obama borrower defense rule, aimed at cancelling student loans for students deceived by for-profit colleges: The DeVos team insists on a rule with so many barriers that few students are likely to get meaningful relief.

Her Department also announced it would do nothing when transgender students are banned from school bathrooms.

While Boss Trump talks about backing any big beautiful immigration pact Congress can agree on, disturbing hatchet-man Miller is attacking any reasonable proposal, or any Member of Congress willing to deal.

Kelly and McGahn both knew for a long time that aide Rob Porter had a troubling record, but they kept him on, and maintained his access to sensitive information, presumably because he was one of the few competent people in the building.

With chief of staff Kelly, to save his own hide, getting serious about White House security clearances, entitled son-in-law Jared, whose multiple ethics and disclosure fails have prevented him from getting a final clearance, apparently is staging a hissy fit.

Meanwhile, people questioned by Mueller say the special counsel is asking questions about Jared’s efforts to get foreign financing for his real estate business during the presidential transition. In many of the post-election meetings with powerful foreigners, Jared was sitting alongside Michael Flynn, who has strong incentive to sing.

Turns out taxpayers are covering numerous first-class air tickets for the climate-denying, frequent-flying Pruitt because of a security threat that seems to come down to his being a snowflake afraid to face his pro-environment critics in coach. And where are Pruitt’s travels taking him? The political Holy Lands of New Hampshire and Israel. You go, future president.

Trump lost his mind when the latest Mueller indictment — charging thirteen Russians with “supporting the presidential campaign of … Donald J. Trump … and disparaging Hillary Clinton” — didn’t lead the media to immediately exonerate him, and after his team concluded that the president playing golf after a mass shooting just miles away was in bad taste. So, as part of a disgusting tweet storm, Trump went there, as we all figured he would: He blamed the Parkland massacre on the FBI and the Russia investigation.

He also went, briefly, to a hospital where victims were recovering, and did what he usually does in a crisis — the same thing his companies have done when closing a sale on a condo or a spot at Trump University: He said congratulations!

Trump continued to do nothing to support his own government’s efforts to protect against further Russian interference in our elections. He criticized his own national security advisor for confirming that Russia had meddled and not mentioning that “the only Collusion was between Russia and Crooked H, the DNC and the Dems. Remember the Dirty Dossier, Uranium, Speeches, Emails and the Podesta Company!” He continued to fail to impose the Russia sanctions mandated by Congress.  He continued to not criticize his main man Vladimir Putin. He continued to blame President Obama. He continued to maintain that he had no business dealings with Russia even though he totally did.  And he continued to say NO COLLUSION, despite the mounting evidence that there was.

Trump’s infrastructure plan seems mostly about getting rid of environmental regulations so his rich friends can get contracts.

It took Trump way too long after Rob Porter resigned — and after he stressed Porter’s denials, like he stressed Roy Moore’s and his own — to indicate that he was opposed to men hitting their spouses. We also learned, again, that Trump uses shady fixers to cover up his escapades. And then he used the bully pulpit to impugn a courageous woman who accused him of unwanted advances.

If Russia did that, and it could have been Russia, some people are saying that, then we need to retaliate against Russia by making Donald Trump their president.