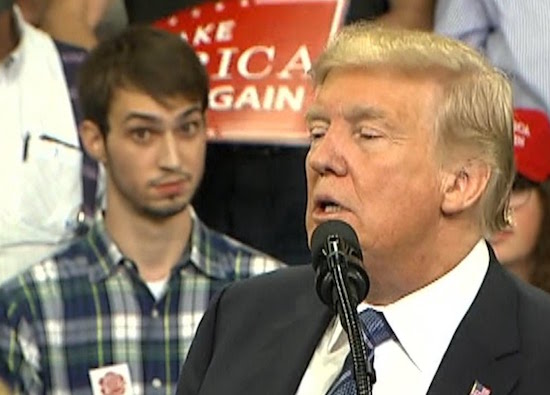 While Trump has dropped all his other hard work to hunt for the TREASON?ous, hard-to-pronounce Anonymous, Republic Report has traveled to Charleston, South Carolina, so we can help put up hurricane shutters and thank the Trump administration for everything it’s doing to accelerate climate change and violent weather. Should be great; right now it’s easy to get a cocktail here, but impossible to find a bottle of water.

As horrendous and vile as the Trump administration has been, for all the awful things it has done, Donald Trump’s own instincts, ideas, and biases are even worse, so it remains a good thing that competent, non-insane people are working there. Because if it was just Don and Steve Miller, doomsday would be even more likely. But Anonymous’s bragging about preventing horrible acts by Trump is still galling, because the administration’s offenses, including racist immigration moves, abandonment of health, safety, and consumer rules, and tax cuts for the rich, are pretty bad. And the enterprise of quietly saving America from Trump can’t be sustained if you publish a New York Times op-ed rubbing it in Trump’s face that you are quietly saving America from Trump. So in the end Anonymous is smug, self-serving, deluded, and incompetent. Just like the boss.

Bob Woodward somehow knows that Kelly said of Trump, verbatim: “He’s an idiot. It’s pointless to try to convince him of anything. He’s gone off the rails. We’re in Crazytown. I don’t even know why any of us are here. This is the worst job I’ve ever had.” All those points are likely true, but if the quote is really accurate I love how it ends. Yes, a giant baby is president, the world is thus in peril, but in the end it’s all about you.

Trump sycophant Paul recommended that POTUS force members of his administration to take polygraph exams to find out who wrote an op-ed. So much for libertarian limited government.

Trump sycophant Graham, in Kavanaugh’s hearing, referred to Trump’s options in picking “men” for the Supreme Court. It’s OK. Lindsey is only following his new best friend Donald, who, yes, only picks men for the Court.

Blatt invoked her alleged credentials as a “Liberal Feminist” Democrat with a young daughter in introducing Brett Kavanaugh to senators, praising him to the skies, and telling critics to shut up.  She didn’t mention that she’s a corporate lawyer who has represented Big Tobacco, Big Pharma, and Big Awful DC Football Team Owner, against smokers, workers, and Native Americans, and whose clients would benefit from the anti-regulation, anti-labor Kavanaugh on the court.

On the heels of DeVos’s trashing of Obama rules to curb abuses of predatory for-profit colleges, there is new evidence of her efforts to help big student loan companies obstruct investigations by state and federal law enforcement into allegations that the companies have cheated and abused borrowers.

GOP senators appear ready to make the sports-loving Kavanaugh our nation’s first bro justice, despite mounting evidence that he has misrepresented the facts about his involvement as a George W. Bush White House aide in the nominations of controversial judicial nominees, his position on Roe v. Wade, his role in Bush policies regarding post-9/11 surveillance and torture, and his awareness that the materials the Bush White House was getting from a GOP senate aide were being stolen from Senate Democrats. This pattern suggests Kavanaugh is a crafty GOP political operative on a life-long mission to infiltrate the top ranks of the judiciary: Roger Stone posing as Learned Hand.

Pence’s endless false statements, fake piety, and fawning over crooked Trump are sickening. When Pence says, as he frequently does, “nothing could be further from the truth,” that’s a tell that he is lying. On Face the Nation, Pence said, “President Trump is the most accomplished president of my lifetime and I think already one of the most successful presidents in American history” and Trump “has strongly affirmed the principles of rule of law.” On Fox News Sunday, Pence intoned, “It was very disappointing to see President Obama break with the tradition of former presidents, and become so political…”

And then there’s Pence’s willingness to prove to this greatest of presidents that he isn’t the leaker:

CHRIS WALLACE: Should all top officials take a lie detector test, and would you agree to take one?
PENCE: I would agree to take it in a heartbeat and would submit to any review the administration wanted to do.
WALLACE: –
PENCE: *Chris, I would submit to waterboarding or even listening to loud “rap” music if President Donald Trump, who has blessed our nation, asked me to do that.*

Trump seems to agree with Mike Pence, or do even better, telling Bob Woodward on their recorded August call, “nobody’s ever done a better job than I’m doing as president.” I don’t think that’s true.

In a tweet breathtaking even for this president — highlighting his contempt for the rule of law and his naked corruption — Trump attacked Jeff Sessions over the prosecutions of early-Trump-supporting congressman Collins and Hunter, suggesting that, under a Republican administration, Justice Department prosecutions should be tailored to helping the GOP win elections. Also ugly is Trump’s demand that Sessions launch a criminal investigation into the Anonymous op-ed, despite a complete lack of indication that any crime was committed.

It’s also clear — and disturbing — that Trump is focusing attacks on the very Justice Department and FBI officials — Bruce Ohr, Andrew Weissman, Andrew McCabe — who are expert in the Russian mob and its money laundering — money laundering that is linked to the Trump Organization and its properties around the world.

And at an Indiana rally Trump yelled, “These are just dishonest, terrible people,” pointing at reporters covering the event. That happened on the same day the FBI arrested and charged an armed man who threatened to kill Boston Globe reporters, calling them “enemies of the people” and mentioning Robert Mueller.