posted at 1:17 pm by David Halperin 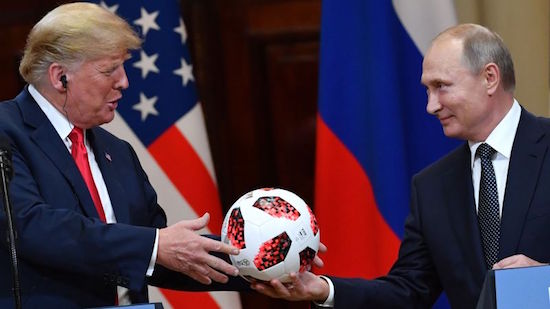 President Don Trump is in full out-of-control control now, with General Kelly all passive-aggressive-checked-out, and grownups like McMaster and Cohn long gone. Those thriving now are the yes men and a few yes women who swiftly and disgracefully rationalize POTUS’s lies and execute his Orwellian orders. So this countdown, as usual, writes itself.

Kudlow is just the kind of privileged man at a Connecticut cocktail party that finds tariffs distasteful and counterproductive, yet now he slavishly serves in the Trade War Army of Donald “Tariffs are the greatest!” Trump.

Shine is the man who presided over a Fox News rife with sexual abuse, not to mention relentless on-air distortions. Days after arriving at the White House, he executed the ugly Trump order to exclude from covering a Rose Garden event a CNN correspondent, who, while serving as pool reporter during an Oval Office meeting, asked Michael Cohen-related questions that clearly made Trump mad. Shine told the reporter, Kaitlan Collins, that her questions were “inappropriate.” But Trump had tweeted about Cohen that same morning.

Sanders stood at the White House podium and announced plans to take away security clearances from former top national security and intelligence officials who have criticized Trump. Will you remember where you were when our republic was assassinated?

It’s more clear than ever that Ross misrepresented the origins of a proposed census question asking people whether they are U.S. citizens — the push came not from the Justice Department, as claimed, but from Steve Bannon, and Ross himself was actively demanding it. At least it’s some evidence that Ross does things at Commerce besides insider trading and falling asleep.

DeVos issued a proposed rule to destroy the Obama regulation that would have granted some debt relief to students ripped off by predatory for-profit colleges — the scam schools, many run by GOP donors, that act like Trump University, but worse, because they also get billions in taxpayer money. Broke, deceived students at the collapsing Art Institutes schools across the country are among those who won’t forget that DeVos turned her back and accused students, rather than crooked schools, of being the con artists.

DeVos’s Department is so anti-student that even the Trump-Mulvaney Consumer Financial Protection Bureau accused it in court of stonewalling efforts to obtain information about giant lender Navient, which CFPB is suing for cheating student loan borrowers.

Known for threatening to destroy Russia, North Korea, and Iran, Bolton now only threatens to destroy Iran, because that’s the one Trump feels like threatening to destroy these days. Bolton is reportedly moving to exclude General Mattis from the White House policy process. And he announced, “The president believes that the next bilateral meeting with President Putin should take place after the Russia witch hunt is over,” thus demonstrating his mastery of diplomatic terminology.

Nielsen has repeatedly claimed that Homeland Security officials have given deported migrants a choice about leaving their children behind, but an administration official admitted that as many as three-quarters of those migrants were never offered that decision, thus greatly increasing the challenge of reuniting families.

Continuing her parade of falsehoods, and her sucking up to POTUS, Nielsen, speaking in Aspen, again pretended that she had not heard that Russian interference in the election was aimed at favoring Trump. I guess she’s been so busy not reuniting parents with children that she missed the Helsinki press conference where Putin said he wanted Trump to win.

Not just a master lawyer, Giuliani turns out to be a superb audio forensics analyst, hearing just what President Trump wants us to hear on a tape about Trump making a payoff to silence a Playboy centerfold Trump had never heard of.

Trump again reenacted the Joe Pesci shine box scene from “Goodfellas”: He was forced by staff back at the White House to read a statement that claimed that when he said in Helsinki about election hacking, “I don’t see any reason why it would be” Russia, he actually meant “I don’t see any reason why it wouldn’t be Russia.” But then he couldn’t help ad-libbing, “Could be other people, also. There’s a lot of people out there.” There certainly are. Now go home and get your shine box.

Helsinki was also where Trump termed “an incredible offer” Putin’s sucker proposal to have Russian agents interrogate former U.S. ambassador to Moscow Michael McFaul and other Kremlin critics. Trump later tweeted that the meeting was a “great success,” as if to welcome back Sacha Baron Cohen. In the same tweet, he again said that “the Fake News Media” was “the real enemy of the people.” 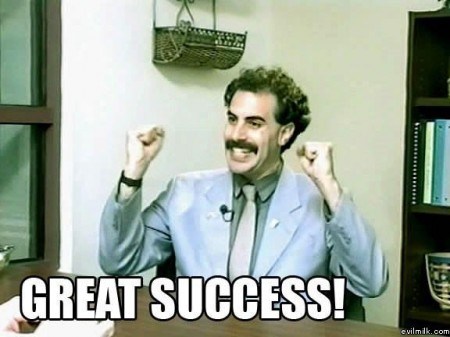 When you think about Trump alone in the room with Putin for two hours, and the relative skill and knowledge on each side, you start to question the effectiveness of our system versus theirs in choosing a leader. Let’s just surrender.

Anyway, Trump’s World View seems to be this:

1. Putin regime and Charlottesville Nazis: Good people, and fault, on both sides

Trying to pretend that he’s really standing up to Putin, Trump offered this tweet, “I’m very concerned that Russia will be fighting very hard to have an impact on the upcoming Election. Based on the fact that no President has been tougher on Russia than me, they will be pushing very hard for the Democrats. They definitely don’t want Trump!” I definitely don’t want Trump. He’s unpersuasive.

Trump’s recent unhinged ugliness also included the aforementioned moves to take away security clearances from critics and to exclude an inquisitive reporter from an event, his ALL-CAPS tweet threat to obliterate Iran, his gross mischaracterization of the Carter Page FISA warrant material, his reference to President Obama as a “patsy” for Russia, and his reported freakout when he found out Melania’s Air Force One TV was tuned to Fake News Enemy CNN. There was also his administration’s grotesque support at the UN for special interest corporations and against infant breastfeeding.

Oh, yeah, and Trump told the Veterans of Foreign Wars, “Just stick with us, don’t believe the crap you see from these people, the fake news… Just remember, what you’re seeing and what you’re reading is not what’s happening.”

Trump makes up numbers like “Lost $817 Billion on Trade last year” and insists that trade negotiations “are going really well, be cool,” but he also expects us to be cool with a huge taxpayer bailout for Farmers harmed by his Trade War, so that farmers will Vote for Him again.

Meanwhile, the low employment rate masks the ongoing degradation of the concept of a “job.” So many jobs today have low wages, unpredictable hours, no health care, pension, or other benefits, no union rights, no rights to sue for workplace harms. This is largely the result of swampy lobbying by corporate special interests, and by the rightward drift of the Supreme Court — trends wholly facilitated by the Trump-Pence-Koch administration.

And a federal judge’s ruling this week again highlighted that “emoluments” is not some kind of skin infection; it’s an important aspect of the Constitution that protects us against corruption at the presidential level — and Trump is blatantly violating it at his DC Trump hotel and with other properties. 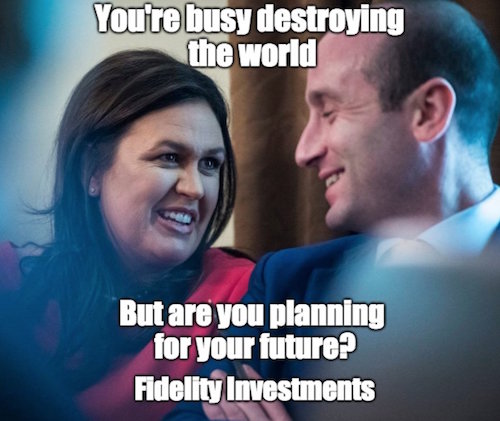