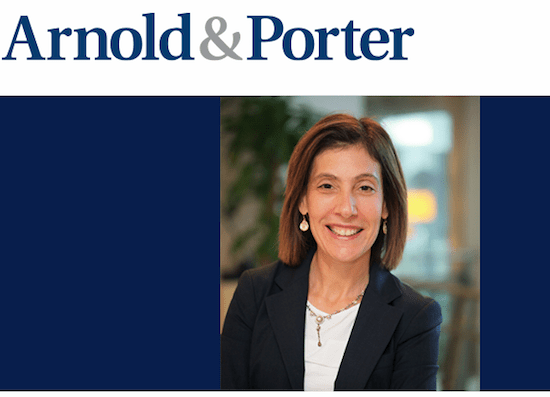 Trump Supreme Court nominee Brett Kavanaugh is set to be introduced at his confirmation hearing by two Republican heavyweights — Senator Rob Portman (OH) and former Secretary of State Condoleezza Rice — and also by a lawyer most people haven’t heard of, Lisa Blatt.

Why Blatt? She published an article in Politico last month entitled, “I’m a Liberal Feminist Lawyer. Here’s Why Democrats Should Support Judge Kavanaugh,” in which she touted her professional qualifications (“I have argued 35 cases before the Supreme Court, more than any other woman. I worked in the Solicitor General’s Office for 13 years during the Clinton, Bush and Obama administrations”) and also flaunted her liberal credentials: She mentioned her service as a law clerk to Ruth Bader Ginsburg and stressed how worried she was about the fate of Roe v. Wade as “a liberal, female Democrat and mother of a teenage girl.” She also wrote, “What happened to Merrick Garland was a disgrace.”

But, Blatt wrote, she got to know Kavanaugh after he, as an appeals judge, sent her an email complimenting her on an article she wrote and since then, they’ve spent time together “mostly to talk about kids and work-life balance, including the challenges I’ve had as a woman trying to raise two children while practicing law.” Blatt gushes, “Kavanaugh is a great listener, and one of the warmest, friendliest and kindest individuals I know.” She said Kavanaugh would “do the job with dignity, intelligence, empathy and integrity.” And she concluded by demanding, “Democrats should quit attacking Kavanaugh—full stop.”

Moments ago, in his opening statement in the confirmation hearing, Senator Orrin Hatch (R-UT) touted the endorsement of Democrat Blatt as evidence of broad support for Kavanaugh.

What Blatt did not disclose in her article, but as Amanda Terkel noted in Huffington Post over the weekend (and many others already knew or with Google had quickly ascertained), is what kind of lawyer Blatt is: the kind of lawyer who will win more cases, and make more money, if Kavanaugh is added to the court and forms a solid, potentially 20-year five justice hard-line conservative bloc.

Blatt works at the giant DC corporate law firm Arnold & Porter, where her bio brags up front about “her work in Price v. Philip Morris, Inc. in overturning reinstatement of $10 billion verdict against client Philip Morris” — meaning she helped a big tobacco company defeat complaints that it deceived smokers about the safety of “light” cigarettes. The bio also boasts that Blatt “represented the Washington Redskins in the long-running dispute with the government of the Team’s trademarks”; that dispute was over claims by Native Americans that the trademarks were racist slurs.

[Blatt] was also the lead counsel for PhRMA in a successful case that allowed pharmaceutical companies greater access to doctors’ prescription information in order to market their drugs. And she assists the Republican-leaning U.S. Chamber of Commerce in selecting which cases to get involved in. She even helped write an amicus brief for the Chamber in a case that made it tougher for employees to sue their employers for workplace harassment.

A five justice hard-line conservative bloc concerns many people because of the potential hostility to civil rights, abortion rights, voting rights, and other political values. But perhaps the most powerful and unifying feature of such a bloc would be its deference to the interests of big business in cases involving environmental, health, and consumer protections and the rights of workers. That’s why so much money has flown from big corporate donors like the Koch brothers and the U.S. Chamber of Commerce to the activist conservative legal groups, like the Federalist Society and the Judicial Crisis Network, that cultivate and boost extreme conservatives as federal judges and justices.

As a judge on the United States Court of Appeals for the D.C. Circuit, Kavanaugh has consistently sided with big business.

Confirmation of Kavanaugh will help Blatt’s law practice — not only because he will be another reliable vote for her corporate demands but also because he will be unlikely to forget how she was provided him with “liberal feminist” cover for the right-wing takeover of the court. The fact that Blatt has made campaign contributions not only to Democrats like Hillary Clinton but also to the political action committee of then-Oklahoma attorney general Scott Pruitt shows her opportunism.

Blatt invokes a tradition of DC establishment lawyers who hang on to their youthful Democratic ties, clap from corporate boxes at liberal proclamations at Democratic conventions, and serve in Democratic administrations, but spend most of their careers as lawyers and lobbyists doing the bidding of wealthy banks and corporations as they overpower the interests of workers and consumers.

Blatt is not the only supposed liberal employed in the corporate campaign to confirm Kavanaugh. The Judicial Crisis Network has run a TV ad featuring a lawyer and former Kavanaugh law clerk named Kathryn Cherry, who immediately identifies herself as “a registered Democrat.” She says Kavanaugh “treated me as an equal and never made me feel like a minority” and that “as a woman and a minority I’m confident that Judge Kavanaugh will be a great justice.”  The ad never discloses that Cherry is a lawyer at Gibson Dunn, another enormous corporate law firm. Gibson Dunn has represented oil companies, food manufacturers, predatory for-profit colleges, and other corporate interests that would benefit greatly from Kavanaugh’s ascension to the Supreme Court.

The fact that Kavanaugh is the nominee of Donald Trump, who has repeatedly expressed racist and misogynist views, demonstrated contempt for the rule of law, and is himself implicated in criminal probes about campaign finance abuse and Russia election interference, only underscores the irresponsibility and cynicism of “liberal” corporate Democrats endorsing this nominee.