posted at 8:07 pm by David Halperin 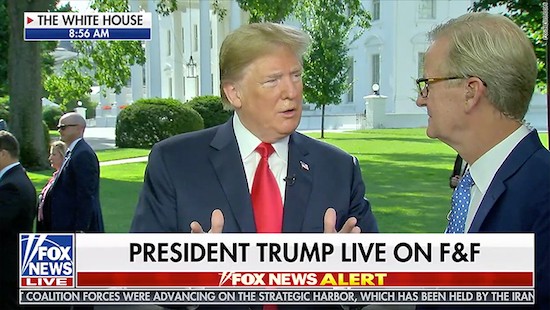 They are tearing little children from their parents. And lying about it. What more do we need to know about this vile president and his ugly administration?

We need a countdown, I guess.

ABC’s JON KARL: The President’s never lied?
BANNON: Not to my knowledge, no. Except when he called me Sloppy Steve. That’s the only….
KARL: He says things that are not true all the time.
BANNON: I don’t believe that. I think he speaks in a particular vernacular that connects to people in this country.

Bannon has it backwards. He is sloppy.

Scary Clown Rudy said of the Russia probe, “When the whole thing is over, things might get cleaned up with some presidential pardons.” If that’s your definition of clean, we all need a shower.

DeVos’s trashing of all the Obama rules to protect students — veterans, single parents, people of color — from predatory for-profit colleges now includes another delay of a basic requirement that schools inform prospective students of essential facts about the costs of attending, loan repayment and default rates, and earnings of graduates. Relieving schools of the obligation to tell students the truth? DeVos is giving predatory colleges everything they want.

Stone and another Trumpsman, Michael Caputo, told congressional investigators they didn’t have contact with Russians. After the Mueller team discovered that, in fact, Caputo arranged a May 2016 meet between Stone and yet another Russian peddling dirt on Hillary, Stone said he forgot.  And tried to spin the encounter as another FBI Deep State setup.

The Post fleshed out the facts on Grifter Pruitt’s excessive luncheoning at the White House mess, and it’s just as we imagined: He was eating there, instead of at the loser EPA cafeteria, in hopes of getting face time with POTUS:

At times, some current and former administration officials said, Pruitt’s frequent presence in the West Wing resembles the HBO sitcom “Veep,” in which the vice president keeps trying to draw the president’s attention. Pruitt has dined often at the White House Mess, which allows him to buy discount meals and offers him the chance to wander the West Wing. Sometimes, he tells people to let the president know he is in the building, or he calls Trump’s personal aides on their cellphones so he can speak directly to the president.

On one occasion, according to multiple administration officials, he sat down with a group at a table reserved for White House staffers despite being told there wasn’t room for him in the small eating area.

Of course, all this clutch behavior is working, because the audience is Trump, and Trump likes people who like Trump (as opposed to people by whom he is Treated Very Unfairly™). According to the Post, Pruitt regularly says, during meetings with Trump, “The president’s instincts are completely right,” and he tells guests meeting in the EPA room overlooking the Trump International Hotel, “I really admire the man who owns the hotel across the street.”

EPA staff who have been forced to perform a wide range of personal tasks for the entitled Pruitt do not seem to really admire him, at least not anymore, with one telling the Times, “The problem is he is not Trump — he is not a billionaire. But he sincerely thinks he is.” Sounds about right, except the part where Pruitt is sincere about anything.

Nielsen, who has misrepresented before to protect Trump, and is now reportedly under pressure from POTUS to be meaner to immigrants, tweeted Sunday, “We do not have a policy of separating families at the border. Period.” This was, at best, incredibly misleading; more like a lie. Monday, Nielsen stood tough with the team, saying, “We will not apologize for the job we do… Illegal actions have and must have consequences. No more free passes, no more get out of jail free cards.” Then, in the White House briefing room, Nielsen denied the separations were for the purpose of deterring people from coming to the border — the opposite of what her mentor John Kelly (this week’s ranking: 12) previously said.

Miller proudly claimed credit for “a simple decision by the administration to have a zero tolerance policy for illegal entry, period.” No person so damaged has ever served in such a senior White House role.

Each claimed the Bible made Trump do it.

McConnell’s rich GOP donors are loving Trump’s tax and regulatory give-aways, so he’ll seemingly tolerate any ugliness from the president. And, despite the strong evidence that the Russiagate probe is substantial and complex, McConnell and other top congressional Republicans are using White House talking points calling on Mueller to “wrap it up.”

Trump’s repeated lie that the Democrats are responsible for his policy of separating parents from children at the border is vile, as, of course, is the policy itself.

Trump’s repeated statements of admiration for North Korean dictator Kim, notably “He speaks and his people sit up at attention. I want my people to do the same,” are vile. Trump also repeated his lie that he has “solved” the North Korea problem.

Trump’s assertion that the Justice Department inspector general report on the Hillary Clinton probe “totally exonerates me.  There was no collusion.  There was no obstruction.  I did nothing wrong” was false — the report says nothing about any of that.

Trump tweeted that a judge’s pretrial lock-up of Paul Manafort, after prosecutors presented evidence that Manafort was trying to coach witnesses, was “Very unfair!” But Trump also pretended, again, that he barely knew the man, telling reporters, “Paul Manafort worked for me for a very short period of time…. He worked for me, what, for 49 days or something?” It was 144 days, 92 of those as chairman of the Donald J. Trump campaign.

Trump also told reporters, “I feel badly for General Flynn…. some people say he lied, and some people say he didn’t lie. I mean, really, it turned out maybe he didn’t lie.” Flynn has pled guilty to lying to the FBI. So here Trump was blatantly lying — about lying. Just making shit up and hoping it would stick, which, among his followers, of course it will.

New York state has finally sued Trump for what has been apparent for two years — that his charitable foundation was run as a personal piggy bank for the Trump family, as well as a vehicle to promote the Trump campaign. In a normal world, these facts already would have given rise to a special counsel criminal investigation. (OK, in a  normal world, this crook would not have been elected president.)

Finally, Trump told reporters that he was going to work on Father’s Day, and then he played golf.