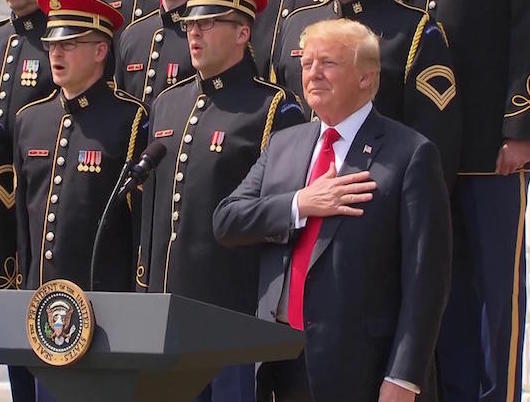 Americans conspiring with Russians to steal a stunning victory is awesome. Go Caps!

Meanwhile, this was the week that Donald Trump became King.

And took on the Eagles.

Charles (who served 14 months in prison after a 2004 guilty plea to 18 counts of illegal campaign contributions, tax evasion, and witness tampering) and son Jared (TBD) are great candidates for future Trump pardons. Both seem pretty cocky these days, with Charles dismissing ethics watchdogs who have raised questions about Jared’s refusal to divest from his businesses as “jerks” who “can’t get a real job” and want to “assure that poor, not successful people go into government…. Because if you’re successful, you shouldn’t be penalized by stupid ethics watchdogs raising things that are potential.” He added, “I look at what my kids have sacrificed to go into government, with the only intent of doing good for this country and for the world, and to help people. And what they have sacrificed, and the daily barrage of negative media, and the attacks they get, and they had a perfect, beautiful life and they still have a very good life, but they sacrificed a lot.” Young and Beautiful Lives.™

Jared, meanwhile, is reportedly reasserting influence in the West Wing now that he’s finally got the top security clearance he had been denied for so long because of his utterly disgraceful failure to make proper disclosures on his clearance application.

Grenell, who arrived in Berlin last month, told Breitbart, “I absolutely want to empower other conservatives throughout Europe…. I think there is a groundswell of conservative policies that are taking hold because of the failed policies of the left.”  He cited “migration” as his first example of such conservative policies, meaning he was talking about empowering bigoted “populist” far-right parties rather than traditional European conservatives such as, say, German chancellor Merkel, the leader of the country to which Grenell serves as United States Ambassador.

The vile right-wing birther, who, among many other grotesqueries, has mocked the Parkland survivors and called Rosa Parks “overrated,” was caught red-handed engaging in deliberate violations of campaign finance laws and pled guilty to a felony. He could have taken his unwarranted Trump Celebrity Pardon™ and STFU, but instead he gloated at Preet Bharara: “KARMA IS A BITCH DEPT: @PreetBharara wanted to destroy a fellow Indian American to advance his career. Then he got fired & I got pardoned.” You stay classy.

Yeah, it’s an impossible job, being the spokesperson for a corrupt enterprise led by a shameless liar. But the way to deal with that is for everyone to refuse to do the job, until there’s no one left on earth to take it. Instead, Sanders peddles Trump’s lies, which she cannot possibly believe, and stonewalls, including on the question of whether her prior remark that Trump did not “dictate” the Don Jr. Trump Tower Meeting™ statement — now contradicted by a leaked memo from Trump’s lawyers — was accurate. A defensive Sanders insisted that “my credibility is probably higher than the media’s.” In fact, it’s about tied with one guy in the media: Alex Jones.

DeVos, who seems to know very little about anything, got in trouble the last time she testified on the Hill for saying that it was up to individual schools to decide whether to call ICE on undocumented students; more than 100 House and Senate Democrats issued a statement noting that a long-standing Supreme Court decision gives all enrolled students the right to an education. Tuesday, before the Senate Appropriations Committee, DeVos backpedaled on that one, but made another ugly misstep, saying that the “commission” she chairs on school violence would not be looking at the issue of guns “per se.” The education department was forced to issue a clarification, which made sense given that the commission’s mandate actually does (generously) include one gun policy issue: age restrictions for certain firearms purchases.

DeVos also simply denied that she has staffed her Department with former officials at predatory for-profit colleges, even though she has.

Even GOP senator Roy Blunt, the chair of the appropriations subcommittee, finally called on DeVos to start responding to the congressional requests for information that, it was clear from Democrats’ questions, were piling up in the DeVos Department.

Mueller’s team says Manafort has tried to tamper with witnesses in his criminal case. Looking back on Manafort’s record of thuggery, dishonesty, and gangster suits, I’m inclined to believe it.

The Unfounding Father™ keeps working to dismantle our constitutional system. Among other destructive pronouncements this week by the one-time America’s Mayor™ / now lawyer for crooked man, Giuliani said that Trump couldn’t be prosecuted without being removed from office first, even if he shot James Comey — interesting choice of example; said that Trump was just too busy to testify — even though Trump clearly has time to golf, watch TV, and comment on celebrity news; and said “the reason you don’t let the president testify” is because “our recollection keeps changing.” As we say in the law, that last argument proves too much. That’s the reason you don’t want any liar to testify. But the law doesn’t make an exception for a president.

The swamp got swampier for Grifter Pruitt™ again this week: the courtside Kentucky basketball tickets from coal baron Joe Craft, who has benefited from Pruitt policies in Oklahoma and at EPA; new revelations about the lobbying of EPA by the guy whose wife gave Pruitt the sweet $50/night apartment deal; the hiring of an ex-chemical industry lawyer to run EPA’s Superfund task force; the $1,560 in taxpayer money that EPA spent on twelve custom Scott Pruitt™ fountain pens from a DC jewelry store.

Certainly Marilyn Pruitt deserved her own Chick-fil-A™ franchise if her husband Scott and his aide Samantha Dravis got to eat dinner in a pricey Rome restaurant with an accused-pedophile climate-change-denying Cardinal, but that doesn’t mean Pruitt should have use his overpaid staffers / friends the Hupp sisters to set up a call between Pruitt and the Chik-fil-A CEO to discuss a franchise deal; or to call the Trump DC hotel seeking to buy a used Trump mattress; or to conduct apartment searches for Pruitt; or to book Pruitt’s trip to watch Oklahoma play in the Rose Bowl.

My fave detail is that after Pruitt got booted from the $50 place for scratching the floors and not paying, he moved to 13th & U but quickly wanted out of there because, as one of the Hupps expressed it, he wasn’t “comfortable in the area.” Thank you, my friends and neighbors.

Trump announced on his 500th day in office that “we have accomplished a lot – many believe more than any President in his first 500 days.” Depends on what the definition of “accomplished” is.

Passive-aggressive King Donald has now made more clear than ever his view that he wields absolute power, or could if he really wanted to. He notably tweeted this week, “As has been stated by numerous legal scholars, I have the absolute right to PARDON myself, but why would I do that when I have done nothing wrong?” He also declared the office of special counsel “totally UNCONSTITUTIONAL!” and again attacked on Twitter someone named Jeff Sessions. Just as last December Trump told a New York Times reporter, “I have absolute right to do what I want to do with the Justice Department. But for purposes of hopefully thinking I’m going to be treated fairly, I’ve stayed uninvolved with this particular matter.”

Trump’s whiny assertions that he is essentially above the law, no matter what he does and regardless of his motives, are echoed in the leaked memos from his lawyers, arguing that Trump can’t be held to obstruct justice, can’t be charged with any offense in office, can’t be compelled to testify, and can halt the special counsel probe at any time.

When it comes to pardons, Trump short-circuits the process, ignores the many actual victims of injustice (unless Kim Kardashian asks), and instead uses pardons for celebrities who engage in corruption and obstruction of justice and are Treated Very Unfairly™ by prosecutors who are Trump foes. Thus signaling to Russiagate defendants that they can maybe zip their lips.

Trump last year instructed or allowed Sarah Sanders and Jay Sekulow to offer a series of denials that Trump had a role in writing Don Jr.’s phony account of the Trump Tower Meeting™ — a position now exposed as false by the leaked January 2018 memo from Sekulow and John Dowd admitting that Trump dictated a statement.

As to Paul Manafort, Trump resumed pretending that he barely knows the man who ran his campaign during a crucial period.

Turning to the quest for the Nobel Peace Prize, which a lot of people are saying he deserves: After inviting into the Oval Office North Korean general Kim Yong Chol, who delivered a theatrically huge envelope from Kim Jong Un, Trump told reporters that the envelope contained a “very nice… very interesting letter” before remarking minutes later, “I haven’t seen the letter yet… I haven’t opened it.” WTF? Trump.

When Trump announced his last-minute disinvite of the NFL champion Philadelphia Eagles to the White House, he cited not only the fact that many players had declined to attend but also his view that “Staying in the Locker Room for the playing of our National Anthem is as disrespectful to our country as kneeling” — even though no Eagles players had engaged in either of those acts. Trump obviously saw a fresh opportunity to rile up those in his base who love Trump’s nakedly racist attack on NFL players who have peacefully protested against repeated police shootings of unarmed people of color. Trying to paint the Eagles players as unpatriotic with his tweet attack, press statement, and a substitute White House event “proudly … playing the National Anthem and other wonderful music celebrating our Country” was ugly, but Trump had to append a lame effort to try to drive a wedge between the team and its supporters, with a Sarah Sanders statement that “the vast majority of the Eagles team decided to abandon their fans.” I’m sure all the fans will stop backing the Eagles now and start rooting for the New Jersey Generals.

Oh, and it was a long time ago (7 days), but we can’t forget that Trump’s sole reaction to Roseanne Barr’s racist tweet was to complain that Disney CEO Bob Iger had apologized to Valerie Jarrett but “never called President Donald J. Trump to apologize for the HORRIBLE statements made and said about me on ABC.” Truly a Lincolnesque healer of the nation’s wounds. That I can tell you.