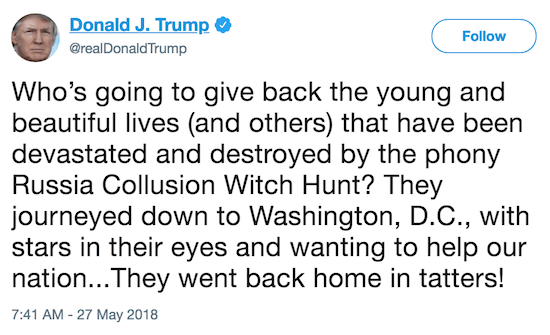 Sixteen months down. We are, perhaps, one-third of the way through the Trump administration, although instead of 32 months more, it could be 3.2 or 320 months instead, lord knows, given the range of conceivable, disgraceful outcomes.

Both are apparently tattletales! Also, Sadler is very spiteful, and Schlapp is very swampy.

There was a tiny instant when one thought that maybe, despite his Koch brothers/right-wing ideologue past, Pompeo might act like a competent grownup as Secretary of State, better than the clueless, remote Rex Tillerson. But then Pompeo expressed outrage, smirked, and laughed when Sen. Tom Udall (D-NM) asked a legitimate question about the risks that Trump financial conflicts of interest posed for US foreign policy.

Barely any new revelations of grifting this week — a rarity — but there was more about fossil-fueled Pruitt’s efforts to deny the stark reality of climate change, and Pruitt remains a shameless, luxury-grabbing, influence-selling disgrace — the opposite of a public servant.

Since the election, rivals-for-Donald’s-love Cohen and Lewandowski have engaged in an ugly competition for the title of Mr. Swamp, each leveraging ties to Trump to ink huge unregistered-lobbyist consulting contracts with corporations and (at least in Cohen’s case) Ukrainian and Russian interests.

DeVos never lets the facts get in the way of her relentless efforts to demean schools, teachers, and students, and to reward greedy education profiteers. Late Friday, a federal court smacked down her unlawful effort to deny meaningful debt relief to students deceived by predatory for-profit Corinthian Colleges.

The reverse of a founding father, the one-time America’s Mayor now works to unravel our constitutional democracy with blatant lies and demagoguery. Just for example, Giuliani is saying that Robert Mueller’s indictment, on behalf of the American people, of thirteen Russians for interfering in the U.S. election is a “phony” effort to manipulate the media. Thank you Yankee Stadium fans for booing Rudy.

Hope Hicks is never in tatters. I guess he means the young and beautiful lives of Paul Manafort and Michael Flynn.

Trump’s claim that the New York Times relied on an “phony source[]” “who doesn’t exist” regarding the likelihood of the Korea meeting still occurring on June 12 — when in fact it was a Trump national security official who addressed a large group of reporters on condition of anonymity — was grotesque but, at this point, just another day at the office.

Trump’s disgraceful propagation of the phony “SpyGate” scandal and other lies about the Russia probe aims to obstruct the inquiry into his own criminal conduct and advance the awful brainwashing of MAGA minion millions. We know — it’s working.

Trump’s ugly endorsement of the NFL owners’ cowardly stance on player protests reaffirms his utter disrespect for freedom of speech and his vile indifference to police violence against African-Americans.

Trump’s declaration to Naval academy grads that “our ancestors tamed a continent” was one more winning piece of white supremacist mythology.

Trump also threw under the bus his own speechwriter who had the nerve to write that the 2018 elections were as important as the 2016 contest where Trump’s name was on the ballot — “I’m not sure I really believe that. I don’t know who the hell wrote that line.” He can’t even pretend to care about others.

Trump’s issuance of executive orders weakening the power of government workers and unions was one more milestone in his project to hurt hard-working Americans while claiming to champion them.

Trump’s save of faltering Chinese telecomm company ZTE comes as Ivanka got her new China trademarks approved, which came on top of a Chinese state-owned construction company investing in an Indonesian deal with Trump Organization partners there. #Corruption

And Trump blamed Democrats for his own vicious policy of separating children from parents seeking political asylum. Perhaps the Mueller probe will ultimately separate him from Ivanka.