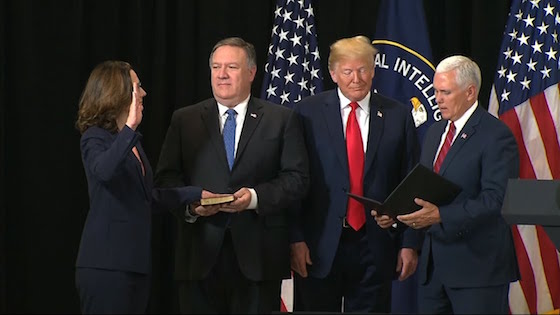 If you voted for Trump and he goes to prison you should go too.

Geologist Zinke and wife Lola are using a lot of Interior staff time and money to book VIP tours of those American monuments that they haven’t yet turned into uranium mines. How can Zinke, Scott Pruitt, Mike Pence, Mike Pompeo, Ivanka, and John Bolton all be GOP presidents? Too little time — what an embarrassment of riches.

The opportunistic Nielsen, who in January testified under oath that she couldn’t recall Trump referring to African nations as “shit,” told reporters after meeting with House members on mid-terms election security that she was “not aware” that Russian interference in 2016 was aimed at tilting the outcome to Trump. “I don’t believe,” she said, “that I have seen that conclusion … that the specific intent was to help President Trump win.” She needs to have her conscience examined.

The latest revelation about access-selling Cohen is that, on April 5, he helped a big Trump donor, Franklin Haney, pitch an Alabama nuclear power plant to Qatar’s state-owned investment company, at a time when Franklin’s company is lobbying the Trump administration for an extension of tax credits. Bad timing for Mr. Haney: The FBI raided Cohen’s office four days after the pitch meeting.

More ugly details have emerged about how these two convicted offenders — for political corruption and child sexual abuse, respectively — met cute at the Trump inauguration and set out to make many millions by getting retainers from Saudi Arabia and UAE to influence the Trump administration, sowing Middle East conflict, failing to register as foreign agents, and (Broidy) getting enormous Pentagon and foreign defense contracts. Broidy is also the guy who quit his high-ranking RNC post after it was exposed that he hired Michael Cohen to pay off yet another Playboy model, who may have been impregnated by Broidy or, ahem, maybe someone else.

Not content to be the meandering, confusing, defaming, lying legal spokesman for Trump, Giuliani has now made himself spokesman for Robert Mueller, issuing unverifiable announcements about the Russiagate special counsel’s intentions and plans.

As she advances on her march to strip college students of protections against predatory schools and sexual assault, DeVos also presides over the secret school safety “commission” — as high school students continue to be massacred.

After 15 people died in a fertilizer plant explosion in West, Texas, the Obama Administration developed rules to make chemical plants safer. The rules ended up way too weak, but they were much better than nothing.  So, of course, industry shill and personal grifter Scott Pruitt has now gutted them. West mayor Tommy Muksa responded, “With all due respect to Scott Pruitt, he’s never lost 15 firefighter friends. I’m as pro-business as anyone, but some things are way, way, way more important than too much regulation, and that includes the safety of these chemical plants.”

“The Environmental Protection Agency is barring The Associated Press, CNN and the environmental-focused news organization E&E from a national summit on harmful water contaminants. The EPA blocked the news organizations from attending Tuesday’s Washington meeting, convened by EPA chief Scott Pruitt. EPA spokesman Jahan Wilcox told the barred organizations they were not invited and there was no space for them, but gave no indication of why they specifically were barred…. Guards barred an AP reporter from passing through a security checkpoint inside the building. When the reporter asked to speak to an EPA public-affairs person, the security guards grabbed the reporter by the shoulders and shoved her forcibly out of the EPA building.”

Elected by constituents to be actual representatives to Congress, they instead function as henchmen for Trump’s effort to destroy justice and the Constitution.

Elected by constituents to be actual representatives to Congress, and elected by their caucuses to be leaders, they instead function, by standing by and doing nothing, as henchmen for Trump’s effort to destroy justice and the Constitution.

The AP reports, “Going into the North Korea meeting, senior administration officials say, the president has been almost singularly focused on the pageantry of the summit —including the suspenseful roll-out of details. He has not been deeply engaged in briefing materials on North Korea’s nuclear program, said three people with knowledge of the White House efforts.” Of course not.

Trump is not just whining about the justice system and the media these days; he’s directly attacking these and other pillars of our democracy. Too chicken to testify to Mueller, Trump hereby demanded that the Justice Department investigate the investigation of him, despite the lack of evidence of wrongdoing. Trump also pressured the Postmaster General to double rates for Amazon, whose owner also owns a newspaper that investigates him.

A constitutional crisis is ongoing, people. What are we doing about it?

There was yet another another awful school shooting, but Trump, after musing about gun controls in the wake of Parkland, now seems in lock step with his buddies at the NRA, which is now led by White House Constitution-subverter / petty pilferer, Fox News talking head, and Ritalin expert Oliver North (this week’s ranking: 17).

Trump is also endangering women’s health by moving to defund Planned Parenthood at the behest of religious zealots.