posted at 7:51 am by David Halperin 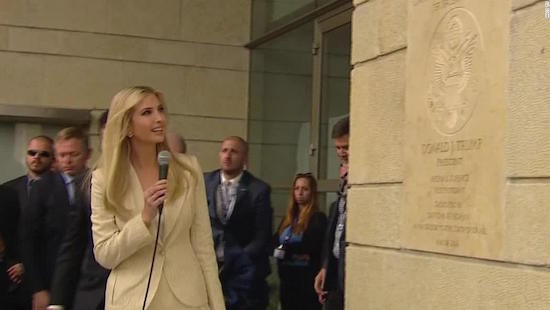 This week we’re actually counting down the top 15. Because sifting through all the backstabbing leaks and other disclosures from this administration, it took us hours this morning to cut down the list from over 100 disgraceful people, and in a few minutes we have to start our next shift guarding Scott Pruitt.

In Don Jr.’s newly-released Senate testimony, he admitted he set up the notorious Trump Tower Russian Government Hillary Dirt meeting to get “information,” rather than to hear a pitch about Russian adoptions. But he claimed that his father didn’t know about the meeting at the time, and that he couldn’t remember who he called on a blocked number and spoke with for eleven minutes in between calls with Eminem Agalarov to set up the meeting. I kinda think Don Jr. remembers.

Wednesday night, the Washington Post reported that “Giuliani said he doesn’t see why Mueller needs to question the president at all”; the paper quotes America’s Lawyer as saying of Mueller, “He’s got everything.” But that same night, Giuliani appeared on Laura Ingraham’s Fox show and said Mueller “has nothing.”

13. Doug Domenech, Assistant Secretary of the Interior for Insular Affairs. Last week’s ranking: no one knows who this is

Domenech, a key official under Interior Secretary Ryan Zinke (this week’s ranking: 22), took meetings with his previous employer, the Koch-connected Texas Public Policy Foundation, while it was engaged in a legal dispute with the department. Doing so possibly violated ethics rules. Adding to the sense that sense that something’s wrong here, Interior spokeswoman Heather Swift (this week’s ranking: 93), told The Guardian the meetings were “primarily social in nature,” even though Domenech’s calendar shows that the meetings concerned specific policy issues.

As you know, Sadler, in a White House meeting, said of John McCain, who has opposed CIA director nominee Gina Haspel, “‘It doesn’t matter, he’s dying anyway.” Meanwhile, McInerney said on Fox that torture “worked” on McCain and “That’s why they call him Songbird John.” As disgraceful as Fox is, the network nevertheless banned McInerney, and, Charles Payne, the Fox host who sat through the ugly remark, apologized. Meanwhile, Trump’s White House refused to apologize, rallied around Sadler, and pledged to  find the real killers, i.e. the leakers.

She’s gotten really, really good at her job, if her job is to not actually answer a single damn question.

DeVos has staffed her Department with former executives at predatory for-profit colleges, blocked the Obama rules aimed at protecting students and taxpayers from scams by those colleges, and now has gutted the enforcement team set up to crack down on fraud. She’s also given repeated blessings to corrupt schemes to convert for-profit college chains into faux non-profits.

Washington’s swampiest “It Couple”  got swampier. The White House won’t say whether Mercedes Schlapp has recused herself from matters related to awful predatory for-profit college business Bridgepoint Education, for which she consulted while working with husband Matt at Cove Strategies. But Matt, who is still at Cove, which still advises Bridgepoint, offered an angry lie to the New York Times, “Bridgepoint and other online institutions were persecuted by President Obama’s administration because they dared to bring innovation to the education market.” Bridgepoint has been under investigation by multiple federal and state law enforcement agencies — for alleged fraud and deception, not for educational innovation.

Meanwhile, Mercedes Schlapp took an important leadership role in the White House effort to viciously attack John McCain and turn the story of Kelly Sadler’s grotesque statement into one about White House leakers. Schlapp allegedly taunted suspected leakers in her midst at a staff meeting, “You can put this on the record… I stand with Kelly Sadler.” Of course, in the toxic Trump White House, Schlapp’s toxic remark was leaked.

In an NPR interview, Kelly undercut Trump’s 2015 candidacy announcement by explaining that “the vast majority of the people that move illegally into the United States are not bad people. They’re not criminals.” But then Kelly defended the administration’s ugly “zero tolerance” policy of separating parents from children at the border; he offered his own bigoted musing about how people crossing the border are “also not people that would easily assimilate into the United States, into our modern society. They’re overwhelmingly rural people. In the countries they come from, fourth-, fifth-, sixth-grade educations are kind of the norm. They don’t speak English; obviously that’s a big thing. … They don’t integrate well; they don’t have skills.”

A lot of non-English-speaking rural people and their descendants have done really well in this country. We call that America.

“I have the best relationship with the president on the outside, and you need to hire me,” Swampy Michael reportedly said in his post-election pitch to various corporations. He also allegedly sought $1 million from the Qatari government to give them access and advice. That is how corrupt DC works, of course, but you don’t have to be so clumsy about it. Hiring Cohen has now forced the dismissal of AT&T’s top lobbyist; led to the retirement of Novartis’s general counsel; and prodded the revelation that Russia-tied Columbus Nova registered several Internet domains with alt-right themes. As far as we know Cohen hasn’t apologized to any of these folks.

More huge payments to Cohen remain to be explained.

The most low-down grifter outside the Oval Office hangs on, likely because Trump recalls the many instances of flattery and fealty from Little Toxic Man.

It seems that Pruitt’s EPA tried to cover up the fact that the main guest with whom the administrator dined at a pricey dinner in Rome was Cardinal George Pell, a climate change denier and also by then an accused and soon-to-be-charged sexual abuser of children.

In Senate questioning Wednesday, Pruitt told senators he doesn’t recall ordering that his motorcade use flashing lights and sirens to get him to Le Diplomate and other hip-for-DC restaurants, even though an email from his head of security shows Pruitt did. Pruitt also suggested that his 24/7 $3 million security detail was the result of a threat assessment, but EPA’s inspector general had reported Monday that a Pruitt aide had asked for that level of security on Pruitt’s first day.

Pruitt also confirmed under Senate questioning that he’s set up a legal defense fund, but he insisted he would not solicit donations from lobbyists or businesses with matters before the agency. Then he’ll have to subsist on donations from fellow evolution deniers. Or, as he later clarified, get others to seek donations “since that’s done by attorneys and others.”

Outside of his efforts to survive his horrible record of pilfering government resources, Pruitt advanced his work, with the fossil fuel companies who have bankrolled his rise, to corrupt the climate and environment. Pruitt’s EPA teamed up with the White House, it was revealed this week, to prevent publication of a federal report on the health effects of toxic chemicals in our water supply, after one Trump officials warned release of the study would trigger a “public relations nightmare.”

After more than 50 Gaza protesters were killed by Israeli forces, Princess Ivanka and Prince Jared dedicated the new Trump Embassy in Jerusalem, where they: took beaming selfies with a triumphant Bibi Netanyahu, who exulted, “What a glorious day”; heard benedictions from U.S. pastors Robert Jeffress, who has condemned Muslims, Mormons, gays, and, um, Jews, and John Hagee, who has said Hitler was the progeny of “half-breed Jews” and was sent by God to propel the return of Jews to Israel; and were reportedly blessed by Israel’s Chief Rabbi Yitzak Yosef, who once compared black people to monkeys and asserted that Israel should be free of non-Jews. Jared’s remarks at the embassy dedication addressed the many deaths and injuries in Gaza only by condemning the Palestinians for “provoking violence”; his dead-in-the-water one-sided Mideast “peace” effort thereby became even more dead.

Also, we learned that Rob Goldstone told the Senate that Jared Kushner grew “agitated” and “infuriate[d]” when the Russian lawyer discussed adoptions, rather than Hillary Dirt, at the Trump Tower meeting. #NoCollusion.

The road to the sit-down with Kim Jong Un is getting bumpier, but the biggest danger has been present from the start: The United States would be represented by an ignorant, impulsive, narcissistic kleptocrat.

Instead of admitting the ugliness of Kelly Sadler’s attack on McCain, Trump tweeted, “leakers are traitors and cowards, and we will find out who they are!”  But Trump fosters the disloyal backstabbing leaking White House culture through his vile personality, his petty whining and gossiping, and his hiring of fellow awful people.

Trump, who wouldn’t apologize if his golf cart ran over your grandmother, might have something to do with Kelly Sadler’s failure to apologize publicly, after Sadler reportedly told Meghan McCain she would. Trump apparently got mad in February when spokesman Raj Shah (this week’s ranking: 99) suggested the White House’s handling of spouse abuser Rob Porter could have been better.

As his administration moved to deport more Central Americans who have lived in the U.S. for decades, Trump reportedly pushed Homeland Security Secretary Kirstjen Nielsen (this week’s ranking: 43) to the brink of resignation, and is reportedly canvassing for a replacement, apparently because Nielsen hasn’t moved fast enough on the separating little children from their parents at the border thing. (At least 700 children have been separated since October.) Trump also said of people who have crossed or tried to cross the border, “These aren’t people, these are animals.”

Trump fires people constantly, mostly those who dare question him instead of sucking up. He hasn’t fired Scott Pruitt, despite dozens of examples of appalling behavior by the EPA head that should outweigh all Pruitt’s sucking up, and this week Trump reaffirmed his confidence in the climate-denying grifter. Pruitt is like the domestic Putin: Trump won’t criticize him, no matter what he does. Does Pruitt have something on Trump (too)? Note that the names “Pruitt” and “Putin” share a lot of letters.

Trump also picked, to run the Labor Department’s pension agency, a nominee, as the Washington Post put it “with no apparent public service experience or direct insight into the agency’s mission.” But a man who is Mitch McConnell’s brother-in-law.

On the kleptocracy front, we learned that Trump’s Turnberry resort in Scotland has received more than £5,600 in U.S. taxpayer dollars in connection with Trump’s planned summer trip to the U.K.

On a larger scale, Trump, on his own, tweeted back to life the troubled lawbreaking Chinese telecom company ZTE, without trade concessions from China, just as a Chinese state-owned company agreed to provide $500 million in loans to an Indonesian resort that includes Trump-branded hotels and a Trump golf course.

The Office of Government Ethics has forwarded Trump’s newly-released financial disclosure form — which, unlike last year’s form, admits the repayment of funds to Michael Cohen — to Deputy Attorney General Rod Rosenstein for the Justice Department’s consideration in connection with ongoing investigations. Makes sense.

Trump remains insistent that he’s innocent, yet remains too chicken to testify to Mueller. He reportedly complains that he needs better “TV lawyers” to defend him on cable shows. What he really needs to do is end this moronic TV show and go back to his Tower.