posted at 9:52 pm by David Halperin 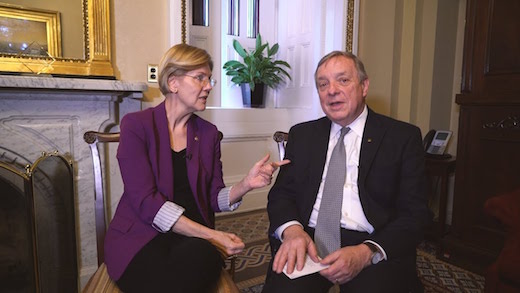 In two separate letters sent over the past week, Democratic U.S. senators are demanding government investigations of a wave of troubling conversions of bad-acting for-profit colleges into non-profit educational institutions.

In these finalized or proposed transformations, for-profit school chains — including Kaplan, Grand Canyon, EDMC, Bridgepoint, CollegeAmerica, Ultimate Medical Academy, and Keiser — are changing their legal status, in deals that seem to make a mockery of federal education and tax laws. The changes allow the schools to escape the stigma that predatory for-profit colleges have so richly earned by ripping off students and taxpayers alike, while avoiding both taxation and the Department of Education rules designed to protect against abuses in the for-profit college industry. Yet in most of these conversions it appears that someone — the prior owners of the for-profit or others financially tied to them — will still earn riches off the arrangement.

Donald Trump’s Secretary of Education, Betsy DeVos, has filled her senior staff ranks with former for-profit college executives and lobbyists, and effectively molded her department’s higher education policy to the wishes of the worst predatory schools, a policy of No Bad Actor Left Behind. One pointed manifestation of this disgraceful abdication of oversight was skillfully reported (unfortunately behind a paywall) last week by the Chronicle of Higher Education: the DeVos Department’s decision to grant eligibility for federal aid to the Blush School of Makeup, an institution whose owner has a lengthy record of disturbing business practices. In addition, DeVos has been approving these dubious for-profit to non-profit conversions.

The Democratic senators have had enough, so they are now demanding oversight by other government agencies.

In a letter sent Monday, eleven senators, led by Elizabeth Warren (D-MA) and Dick Durbin (D-IL), ask the acting commissioner of the Internal Revenue Service, Trump Treasury appointee David Kautter, to “closely scrutinize” these deals before recognizing a converted institution as a legitimate tax-exempt non-profit. They charge that the arrangements “may violate federal tax law,” which bars a non-profit from being used to enrich private interests.

In a separate letter sent last week, three senators — Durbin, Patty Murray (D-WA), and Maggie Hassan (D-NH) — asked the watchdog Government Accountability Office to examine the performance of the Department of Education and the IRS in reviewing these non-profit conversions, in particular whether these agencies are acting to ensure that the new non-profits are being operated for the benefit of students, not the prior for-profit owners.

Even before the swampy Trump administration took over, the chances of getting the IRS to scrutinize troubling abuses of non-profit law were slim; the agency is under-resourced and also seemingly gun-shy after right-wing attacks during the Obama administration on IRS reviews of Tea Party non-profits wading into political activity. A GAO probe could highlight the failure of the IRS and the DeVos Department to scrutinize the non-profit conversions, but it would be unlikely to prompt the venal Trump team to act against corporate cronies.

Still, the diligent efforts of these senators to probe the dishonest, predatory behavior of some of the worst actors in higher education, and the corrupt non-oversight by the DeVos Department, are highly commendable and can help build the case that the Trump/DeVos gang is winking at wholesale fleecing of students and taxpayers.