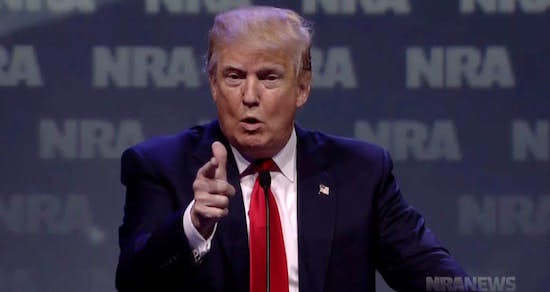 In these tough times, hold your cheeldren close and comfort them with a repurposed Federal Trade Commission pamphlet.

Yeah. Y’all know this shit as well as I do, so this week let’s get this done quickly, OK?

Ten tweets in one day gloating about Schneiderman, really? Have you read up on your predator father, or is there no Internet in your glass tower?

Mulvaney has candidly admitted the truth: that as a congressman, money bought you access to him. He’s now carrying that corrupt philosophy into his destruction of the CFPB, most recently by abolishing the division charged with protecting students against predatory student loan companies.

Giuliani’s inability even to tell coherent lies or make coherent admissions about Trump’s conduct is pathetic; his false attacks, in service of his criminal client, on Robert Mueller are reprehensible.

After decades of making shady business deals, Cohen exploited Trump’s election to create his own New Yorky version of the DC swamp, selling his “insights” on — really, his access to — Trump to AT&T and Novartis (if these weren’t straight-up bribes with some cash reaching POTUS), and using the same LLC to get paid by a Russian oligarch-tied company and to buy the silence of Trump’s Hollywood hookups. When all these threads get sorted out, Cohen will look even worse, as will his boss. Yo, Michael Avenatti is pretty good; Stephanie Clifford may be even more shrewd.

Speaking in Tempe, Arizona, Pence recognized former Maricopa County sheriff Joe Arpaio, who was convicted of criminal contempt for racial profiling and detaining innocent people, before Trump pardoned him. Pence used the sycophantic praise he normally reserves for POTUS to shower Arpaio, calling the ex-sheriff “another favorite, a great friend of this president, a tireless champion of strong borders and the rule of law.” He added, “I’m honored to have you here.” A pious phony praising a racist thug. In so doing, Pence dishonored not only all the victims of Arpaio’s lawless brutality but also all the honest law enforcement officers who do their jobs skillfully and honorably. Trump/Pence America is disgusting.

As his acts of corruption and deception grow so voluminous they could fill a Superfund site, grifter Pruitt’s EPA is a miserable sinking ship. While an EPA aide tried to divert attention by dishing dirt on Pruitt rival and disgraceful Interior Secretary Ryan Zinke (this week’s ranking: 17), Pruitt is hiding and, typically, asking other people to pay for his lawyers as he fights to hang on to his job and eventually become president of the United States.

As with the Paris climate accord, Trump dumped the Iran agreement for a supposedly better deal that he has no idea how to reach. At best this abandonment of arduously negotiated multinational agreements is making the US less relevant in the world. At worst, it risks catastrophe.

But Trump doesn’t care, because he’s the King of Korea, saying he deserves all the credit for progress, awarding himself the Nobel, and, at the moment three Americans held in totalitarian North Korean prisons arrived back on U.S. soil, talking about what high TV ratings he must be getting.

Less than three months after the Parkland school shooting, Trump celebrated in Dallas with the NRA. Amidst a pack of lies about gun issues that angered Britain, France, and lots of others, Trump solemnly told the gun lobby group, “Your Second Amendment rights are under siege, but they will never, ever be under siege as long as I’m your president.” But you just said they were under siege!

Trump tweeted that because “The Fake News is working overtime” and “91% of the Network News about me is negative (Fake)” and “the media … is corrupt” that maybe he should: “Take away credentials?” No, you better not.

Finally, again, as you know, there’s now highly persuasive evidence of the Trump campaign’s shady dealings with Russians, of Trump’s own shady dealings with Michael Cohen, and of Trump’s blatant efforts to obstruct the Flynn and larger Russia probes. But, okay, Trump is confident he has done nothing wrong, and insists, “I would love to speak… Nobody wants to speak more than me.” Yet he’s refusing to answer Mueller’s questions, citing the advice of his lawyers and his belief that the investigation “is a very unfair thing.” Trump is the Chicken-in-Chief, too chicken to testify.