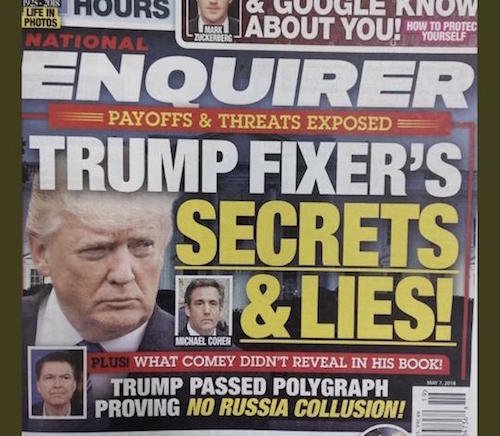 In the backstabbing, leaking, corrupt, erratic, no-collusion Trump White House, where the boss works a largely ceremonial three-hour day, we can always count on our cartoon president to assure us everything’s just great. “The White House,” Donald Trump tweeted this week, “is running very smoothly despite phony Witch Hunts etc. There is great Energy and unending Stamina, both necessary to get things done.”

As Groucho Marx once asked Margaret Dumont, “Who ya gonna believe, me or your own eyes?” Actually, despite what the Fake News Media says, it was Chico pretending to be Groucho who said that. That I can tell you.

You can Google the Marx Brothers, if your oldest pop culture reference is, say, Kanye West (this week’s ranking: 11).

In Trump world, where up is down and con man is president, lobbyists for the mobile home industry can press to scale back HUD regulations, Carson’s agency can move ahead with such anti-reforms while purging career officials in charge of overseeing the rules, and then, when a low-income housing advocate protests during Carson’s speech at a meeting of the industry group — shouting, ‘I need housing, where will I live?” — Carson can call that protester “a perfect example” of “the swamp” in Washington. And the industry audience will laugh and applaud.

The White House Correspondents Association hired for their annual dinner the comedian Michelle Wolf, whose edgy act was publicly available, and then, after she delivered her edgy act, and Trump, Trump flunkies, and elite media figures said they were offended, Talev threw Wolf under the bus. That was the moment the WHCA became … gutless? complicit? hopelessly incoherent?

In Trump’s corrupt swamp Washington, being the “It Couple” means she has a top job in the kleptocratic White House and he runs both a conservative non-profit group and a lucrative corporate lobby business.

Ms. Schlapp, a former consultant to the National Rifle Association, tweeted her disgust at Michelle Wolf’s comedy routine — “It’s why America hates the out of touch leftist media elite”– as she and her husband rode a limo to the exclusive MSNBC after-party. Asked by the New York Times whether they weren’t part of the elite, Trump cable news suck-up Mr. Schlapp said, “I mean, I’m not trying to act like I’m driving a garbage truck in Des Moines.”

While making connections and offering plum CPAC speaking slots through his non-profit, Mr. Schlapp is raking in big bucks at his lobby firm, whose first client was Koch Industries and which is doing even better now that Trump is in the Oval and Ms. Schlapp is stationed close by.

Apparently our ambassador to the Vatican, Callista Gingrich, was deeply offended when she read that a statue of a nude person might be placed on the National Mall temporarily. Her special interest lobbyist husband Newt then brought Callista’s concerns to Trump Interior Secretary Ryan Zinke (this week’s ranking: 12). Days later, the National Park Service, which Zinke oversees, blocked the installation of the statue.

Because statues of nudes are unprecedented in the history of art. And because when I think of morality, I think of the heartwarming story of how the Gingrichs met.

I’m sorry but I’m fed up with these people.

The Mueller investigation is proving to be, um, serious, with nineteen people, including four Trump campaign officials, already charged with offenses, three of those four having pled guilty, and a fourth set for trial, and with Mueller seeking to question the president. Trump needs a real legal team. Instead, it’s failed Secretary of State hopeful Giuliani, who insists that peace is at hand: he says he will “negotiate an end to this.” Like the serial promises of White House lawyer Ty Cobb that the Russiagate probe would be over soon, Giuliani’s position is ridiculous.

While the House Intelligence Committee, chaired by Devin Nunes (this week’s ranking: 23),  issued its report fully exonerating Trump on Russiagate, Tea Party stalwart and close Trump confidante Meadows admitted responsibility for a leaked draft of charges in case the House wants to impeach Republican Deputy Attorney General Rod Rosenstein. The dispute is ostensibly about access to documents, but really it’s about GOP House stooges running interference for the beleaguered POTUS. Rosenstein, sensibly, responded that the Justice Department “is not going to be extorted.” UPDATE 05-02-18 12:15 pm: This morning, Trump backed up Meadows’ threat with one of his own.

They are getting almost everything they want from the Trump administration — huge tax breaks, greater leeway to pollute and overheat the planet. Which isn’t surprising, because administration heavyweights like Mike Pence, Mike Pompeo, Don McGahn, Marc Short, Scott Pruitt, and many others, were long their paid stooges. Now it’s been confirmed, through documents that have been concealed for years, that the Kochs, the Federalist Society, and other conservatives have had their way with Virginia’s public George Mason University (this week’s ranking: 43), providing big cash gifts and getting some measure of influence over academics.

Whether or not Kelly actually called Trump an “idiot,” told staffers that he alone can save us, and demeaned women, or whether instead Kelly’s West Wing foes fibbed a little, the chief of staff has utterly failed to solve the problem of Trump. He’s also supported a disgraceful series of Trump policies.

Pruitt was crafty enough to avoid yelling, under congressional questioning, that he ordered the Code Red, but that was just an extension of his grifter skills. Among other evasion tactics, Pruitt blamed his underlings, further contributing to sinking morale at EPA. Now, close aides connected to shady practices are resigning.

#MAGAman turned-EPA deputy chief of staff-turned Pruitt accuser Kevin Chmielewski says Pruitt lied when he told House members that no EPA employees were retaliated against for raising concerns about Pruitt’s big spending. Democratic representatives Doris Matsui (CA) and Paul Tonko (NY) charged that Pruitt may have deceived them on whether EPA was working to revoke California’s permission to set vehicle standards tougher than federal limits.

The hits keep on coming for Pruitt, with the latest revelations: that Pruitt let a lobbyist friend, Richard Smotkin, help plan and join him for meetings during a dubious December trip to Morocco, and then that Morocco hired the same Smotkin to lobby for a $40,000 per month fee; that Pruitt gave Federalist Society official Leonard Leo the run of the EPA and a shared audience with the Pope; that Pruitt’s landlord’s husband, lobbyist Steven Hart, asked Pruitt for help getting people named to an EPA advisory board, after telling reporters he never lobbied the EPA; and that Pruitt’s EPA has just granted Trump crony billionaire Carl Icahn a financial hardship waiver from a biofuels requirement, potentially saving Icahn’s company tens of millions — the kind of relief that Icahn has been seeking in all kinds of shady ways since Trump’s election.

Pruitt’s salvation strategy seems to come down to, as someone recently pled, Save me President Jesus: pandering to the climate denial division of the Christian right and to his ultimate lord, Donald Trump.

We pray for Scott Pruitt.

This week, we must give credit where credit is due: Standing alongside Nigerian president Muhammadu Buhari, Trump, for an instant, did not lie — he did not deny that he referred to African nations as “shithole countries.” Instead, he elaborated on what he meant by a shithole: “countries that are in very bad shape and very tough places to live in.”

It’s all downhole from there.

After the debacle of Trump dumping highly-qualified VA secretary David Shulkin for unqualified, fast-living sycophant White House doctor Ronny Jackson, Trump told his Michigan rally crowd that he had dirt on Senator Jon Tester (D-MT), who had dared to raise issues about Jackson. Our leader bluffed to our nation, “I know things about the senator I can say, too. If I said them, he would never be elected again.”

This was the same Michigan speech in which Trump took all the credit for the meeting between the leaders of North and South Korea, and never mentioned the struggling people of Flint, Michigan.

Meanwhile, the previous Trump sycophant doctor — weird, long-maned Manhattanite Harold Bornstein — reported that in February 2017, just after Bornstein (questionably) told the media that he prescribed Trump a hair growth drug, Trump lawyer Alan Garten, Trump bodyguard and White House aide Keith Schiller, and a third man conducted a “raid” on Bornstein’s office, grabbed all Trump’s medical records without providing the proper authorization, and directed Bornstein to take down from the wall a framed photo of the doctor with Trump. Bornstein also fessed up that, as we all figured, Trump dictated that healthiest man ever medical report Bornstein issued during the presidential campaign.

Trump referred to Michelle Wolf as “filthy” and unfunny, even though his own record is one of endless nasty, humorless, profane insults against women, people of color, the disabled, veterans, and others.

We now know, also, that Trump lied and deceived his way into the Forbes rich people rankings.

Trump has also moved to the top of the Mueller suspicious people rankings, but apparently he’s now too chicken to face his investigator. When the New York Times published a list of 49 questions Mueller wants to ask Trump, the president lost his mind again, calling the leak “disgraceful,” even though the Times indicated that the document it obtained was compiled by Trump’s lawyers, not Mueller’s. Trump also crowed that there were “No questions on Collusion,” even though there were plenty of questions on collusion, which makes sense because there’s plenty of evidence of collusion.

The Mueller subpoena is likely coming. Will Trump take the 5th, start pardoning people, fire Mueller, flee to Russia, or what?

On the other probe that could bring Trump down (not be confused with the other, other probe regarding money laundering), FEC reports show that the Trump campaign has spent $228,000 on legal fees for Michael Cohen, even though Cohen has said he had no role in the campaign — raising more questions of legal violations. Ten days ago Trump was still romancing his ex-lawyer, with a series of tweets about how Cohen would never flip despite the pressure. But now that expression of confidence has morphed into efforts to intimidate: Trump pal and dirty work provider David Pecker is preparing for the possibility that Cohen might indeed flip, with a National Enquirer cover story entitled, “PAYOFFS & THREATS EXPOSED: TRUMP FIXER’S SECRETS & LIES!”

Finally, in diplomatic news, as the Trump trade team tries to traverse Trump’s tariff trainwreck, Trump has opened a new confrontation front, soccer — threatening countries that “we always support” not to lobby against the U.S. bid to host the 2026 World Cup.