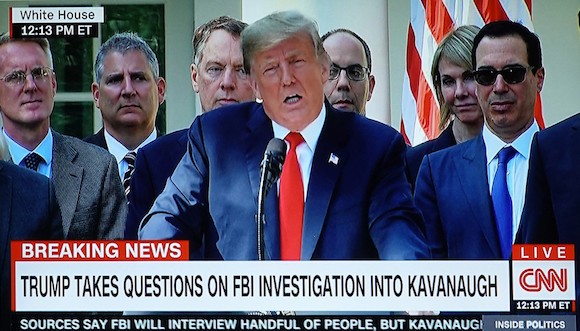 Wow. I didn’t realize that sons and fathers could be accused, in addition to regular men. Now that I get it, I’m all in to confirm for the Supreme Court someone who’s lying. Anyway…

The President said the FBI should investigate fully, while his henchmen made sure that instead, the investigation was heavily constricted, with no interviews of Brett Kavanaugh, Christine Blasey Ford, and others with evidence to provide, and no real investigation into Kavanaugh’s drinking habits, among other things. Now the White House says the FBI results show that Kavanaugh is ready to be confirmed. There is one copy of the report in a vault, and 100 senators and 10 staff have just one day to read it before a procedural vote.

Could Trump’s Washington get any uglier? I’ll let you know in two or three weeks. We’re gonna be looking at a lot of things.

On SNL, West brought Gumby back, waddling around inside his green Perrier bottle, and performed his trifle, and then wrapped up the show with a MAGA rant that included his response to critics who ask how he can back Trump when “he’s racist.” “If I was concerned about racism,” Ye said, “I would’ve moved out of America a long time ago.”  Excuse me?  Not concerned about racism? That doesn’t really make sense. The brilliance of Kanye’s records cannot be diminished, but his Trump trainwreck is harder and harder to look at.

Unimpressive Older Man at Connecticut Cocktail Party Kudlow has sucked up to Trump at every turn, throwing all his actual economic views out the window in order to hang out in the West Wing. Stepping out of his portfolio, Kudlow told Politico, “I think Mr. Kavanaugh has been treated very unfairly.” OK, you are Trump’s sycophant, but could you at least try out a different phrase?

Indicted for using his campaign donations as his personal piggy bank, Hunter is running a TV ad and making statements that falsely and despicably seek to tie his opponent, Ammar Campa-Najjar, to terrorist groups.

Schlapp’s firm, Cove, which lobbies for Comcast, Oracle, Samsung, Verizon, and Walmart, has seen a sharp increase in revenues since Trump became president and Schlapp’s wife joined the White House staff. Not content with his swamp creature riches, Schlapp posted this ugly tweet, which conservative Bill Kristol said “surely seems to be a straight-up appeal to bigotry.”

DeVos’s Department announced that it won’t be able to meet its deadlines for final regulations gutting Obama rules that were aimed at protecting students and taxpayers from predatory for-profit colleges. That caused top for-profit college lobbyist/former congressman/Newt Gingrich crony Steve Gunderson to go ballistic, saying the DeVos delay is “simply unacceptable” and “will only invite more … chaos in the operation of our schools.” He charged the Department with a “penny-wise and pound-foolish” failure to fill key senior policy jobs and noted that the Obama administration was able to complete similar tasks on time. This isn’t about DeVos doing anything to help students; everything her Department has done has favored predatory colleges. In fact her top unconfirmed aide Diane Jones moved this week to reinstate an accreditor, ACICS, that was asleep at the switch for some of the most egregious for-profit fraud. But Gunderson is right in saying DeVos is really bad at her job.

Wheeler, by contrast, is really good at his job, which is horrible for our planet. He doesn’t display any of Scott Pruitt’s grifter bling, but he’s staying on the path of Pruitt’s larger corrupt enterprise: throwing concerns about global warming and toxic pollution out the window and giving GOP donor energy and chemical industries everything they want. With the Carolinas still under water and hundreds and likely thousands dead in Indonesia from violent storms — storms that climate change will make worse — Wheeler continues the methodical destruction of EPA safeguards. This week it was reported that EPA is on the verge of weakening controls on mercury, a  toxic chemical that can damage the brains of children. Wheeler was previously the Washington lobbyist for litigious coal baron Bob Murray, who has pressed the Trump administration to dump the current mercury rules.

Mean cheerleader for the Trump-McConnell-Kavanaugh football team. On Friday, after the Judiciary Committee meeting, Graham said of Kavanaugh, “I’ve never felt better about him being on the bench than I do right now.”

The New Haven police report indicates that Kavanaugh did not want “to say if he threw the ice or not.” I presume Kavanaugh did tell the officers, “I was first in my class. Captain of the basketball team. I got into Yale!”

As a young man, Kavanaugh was, I believe, at a minimum a belligerent blackout drinker, an ugly misogynist assaulter, and, basically, an entitled dick. Now, at a minimum, he’s a bitter GOP operative, a relentless Trumpian liar, and, seriously, an entitled dick. He should not serve on the United States Supreme Court. If Kavanaugh is confirmed after his angry, partisan presentation to the Senate Judiciary Committee, it may indelibly alter what it means to be a federal judge.

McConnell set a procedural vote on Kavanaugh for Friday, and a final vote for Saturday, without having even read the FBI report, but knowing full well about Kavanaugh’s troubling, dissembling testimony last week. During a speech at the August 2016 Fancy Farm picnic in Graves County, Kentucky, McConnell said, “One of my proudest moments was when I looked Barack Obama in the eye and said, ‘Mr President, you will not fill this Supreme Court vacancy.'” And now he is damn proud, no matter how many sexual assault victims bother him at the airport, to deliver the votes for Brent Kavanaugh so Kavanaugh can, in turn, deliver the votes for wealthy Republican donors in Supreme Court cases.

It’s worse than even that, because the Kavanaugh confirmation at this point would signal to Trump in a profound way that he can subvert the truth and subvert justice and get the Republican Congress to approve. So Rosenstein and Mueller might well be the next targets, and more pardons would be on the way.

Trump’s nasty mocking at a rally of brave assault victim Christine Blasey Ford ranks with one of his most vile moments, and that’s really saying something. But, of course, it was inevitable that Trump would try to eviscerate anyone in the way of his victory and his misogynistic sense of entitlement.

At his not-Nafta Rose Garden event, Trump’s ugly Walter Winchell gossip attacks on Democrat senators, and his insults to female reporters, continued his degrading of the presidency.

And a heavily researched and detailed New York Times report exposed the unbelievable degree to which Trump is a tax cheat and a total liar about his origin story; in reality he got rich because his father diverted money that rightly belonged to the U.S. Treasury and used it to bail Trump out of multiple business disasters.

In sum, the man is a bloated, toxic, deep fried human tanning bed.