From Country Club Republican to #MAGA Bully: The Unmasking of Brett Kavanaugh 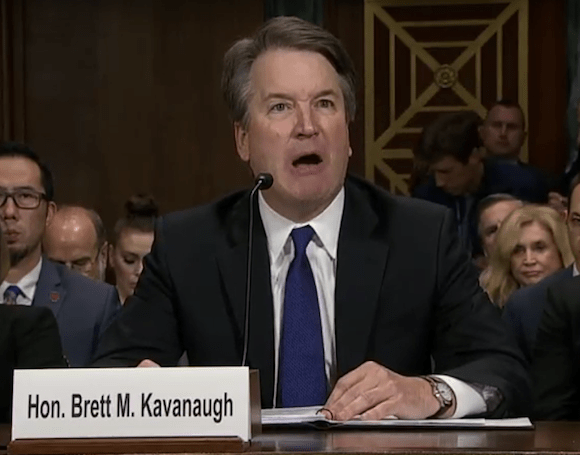 Sitting at the witness table, the federal judge yelled; he bullied senators and impugned accusers; he made false statements about things big and small; he rejected credible allegations of sexual assault; he refused to answer questions; he worked to block an independent investigation of his actions; he attacked the Clintons and railed about a left wing conspiracy; he bragged about his Ivy League credentials; and he insisted that no one respects women more than he does.

His manner suggested a lifetime of entitlement, and yet decades of collected grievances. He showed the angry, vengeful indignation of someone rightly accused.

Kavanaugh had been seen as a Bush person, a connected insider from a privileged background: elite suburban prep school and country club summers, Yale, big corporate law firm, Bush White House, DC federal appeals court. He was the fantasy justice of Federalist Society mastermind Leonard Leo, because he has shown equal devotion to Leo’s anti-choice social conservatism and the anti-worker, anti-consumer, anti-regulation dreams of the Koch brothers, the U.S. Chamber of Commerce, and the rest of Leo’s corporate donors.

However, just as the Federalist Society’s rarified intellectual facade conceals its mobilization of lawyers for hard-nosed political brawling, Kavanaugh is a skilled legal practitioner but, trained in battles from the Starr probe to the Florida recount, is at his core a political operative: Roger Stone posing as Learned Hand.

Kavanaugh said he wrote his bitter opening statement –“This whole two-week effort has been a calculated and orchestrated political hit, fueled with apparent pent-up anger about President Trump and the 2016 election; fear that has been unfairly stoked about my judicial record; revenge on behalf of the Clintons; and millions of dollars in money from outside left-wing opposition groups” — by himself, with assistance only from one former law clerk, but news reports revealed that Kavanaugh spent a week rehearsing his testimony at the White House with lawyers and communications gurus like ex-Fox News president Bill Shine and Sarah Sanders. Also, some of Kavanaugh’s language was cribbed directly from Clarence Thomas’s successful “high-tech lynching” speech of 27 years ago.

And it’s always possible that Kavanaugh got a face-to-face advice session with Trump himself, or else read this passage in Bob Woodward’s book Fear:

Trump gave some private advice to a friend who had acknowledged some bad behavior toward women. Real power is fear. It’s all about strength. Never show weakness. You’ve always got to be strong. Don’t be bullied. There is no choice.

Just as in prior hearings Kavanaugh made numerous false statements regarding his work in the Bush administration —  his receipt of information stolen from Senate Democrats, his involvement in post-9/11 detention and surveillance policies, his role in nomination fights for other judges — Kavanaugh’s remarks Thursday included falsehoods of all kinds. He indicated that it was legal for 18 year olds to drink in Maryland when he was 18, when that wasn’t the case.  He stated over and over that all four people placed in the house by accuser Christine Blasey Ford denied that the incident took place, when two of them (the ones other than Kavanaugh and alleged abetter Mark Judge) said only that they had no knowledge of an assault, and one of those said she believed Blasey Ford. He even pretended to know the meaning of a Latin phrase noted by Senator Blumenthal until his bluff was called.

Kavanaugh shouted that “the Swetnick thing” — the serious sexual assault allegations brought by Michael Avennati’s client — “is a joke!” implying, perhaps, that the allegations of Blasey Ford and Deborah Ramirez were less of a joke.

On Fox News, Kavanaugh had insisted he was choir boy, a sexual abstainer. Before the committee, having heard the criticisms, he opened up slightly, but allowed only that he was “not perfect,” and “sometimes… had too many” beers. His prior boasts of binge drinking, of what happens in wherever stays in wherever, of boofing, Devil’s Triangle, and Renate alumnius, were explained away with more falsehoods.

Although Kavanaugh denied he had the ugly, belligerent side attested to by former classmates, he showed it in spades, especially with his mocking response to Senator Amy Klobuchar, the daughter of an alcoholic, when she questioned him about allegations of blackout drinking.

Throughout, Kavanaugh’s remarks reeked of sneering bro privilege, arrogance, resentment of being probed, contempt for others: “I’ve worked at the highest levels of government”; “the great quarterback on our football team”; “lifted weights at Georgetown Prep”; “captain of the basketball team”, “I was number one in the class”; “I got into Yale Law School. That’s the number one law school in the country”; “Senator, what do you like to drink?” “I don’t know if you’ve been to a Super Bowl party, Senator.”

But Kavanaugh insisted that he respects and empowers women, noting that the majority of his law clerks have been women. The precise level is 52 percent — exactly the percentage of women that Trump falsely claims voted for him. (Trump won 52 percent of white women.) But a report in the Guardian revealed a troubling side to even this accomplishment: the allegation that Yale Law professor Amy Chua told students last year that it was “not an accident” that Kavanaugh’s female law clerks all “looked like models” and that she encouraged a student to send her pictures dressed in various outfits so Chua could ensure she dressed in an “outgoing” way for her interview with the judge.

Kavanaugh also insisted that the two letters from Mark Judge, the first from his lawyer and the second sent hurriedly late Thursday, signed “under penalty of perjury” — denying an assault and refusing to discuss the allegations further — settled the matter, when a person of Kavanaugh’s intellect and experience knows full well that there’s a difference between a conclusory letter and questioning by professional investigators. When Senator Leahy asked him if he was the passed-out drunk “Bart O’Kavanaugh” in Judge’s memoir, Kavanaugh said, after evasions, that Leahy would have to ask Judge — which proved the point that an investigation was needed.

Kavanaugh’s obvious interest in avoiding any delay for an FBI probe of the sexual assault alleged by Ford dovetailed with the political calculation of Mitch McConnell and Trump counsel Don McGahn that the chance of cementing a five-justice right-wing bloc could slip away. The fact that the American Bar Association and three moderate Republican governors called Thursday for an FBI probe underscored what a travesty it is that the White House, Senate Republicans, and Kavanaugh himself refused.

The judge’s breathtaking arrogance is encapsulated in his stance that his suffering through another week of waiting before being elevated, while the FBI investigated, would be worse than the risk that the country might endure 35 years of having a sex offender on our highest court.

“I believed he was going to rape me,” Dr. Blasey Ford testified about Brett Kavanaugh. “It was hard for me to breathe, and I thought that Brett was accidentally going to kill me. Both Brett and Mark were drunkenly laughing during the attack.” More than anything, she testified, she remembered that laughter from a drunken Kavanaugh and a drunken Judge: “I was underneath one of them while the two laughed.” She was 100 percent sure that Kavanaugh was the attacker.

In terms of who is telling the truth, there are obvious indications.

Blasey Ford had no reason to lie, and every reason not to come forward, and she passed a polygraph. Kavanaugh had every reason to lie — his reputation, his family, his career — and there’s detailed evidence that he lied about other matters in his confirmation hearings

The Republican strategy of dealing with this truth deficit looked dubious during Blasey Ford’s testimony, with career prosecutor Rachel Mitchell engaged in slow-moving, oomph-less questioning that must have been driving TV watcher Donald Trump insane. But the idea was simply to keep the all-male GOP Senate group away from Ford, and after Mitchell flailed in some initial probing of Kavanaugh, she was chucked aside in favor of shouting male senators.

Led by Lindsey Graham, committee Republicans deflected with a classic Fox News dose of whataboutism, claiming that Democrats would ambush any Republican nominee and that Democrats sabotaged the process. All of that was false and also essentially beside the point: With credible allegations that Kavanaugh had committed sexual assault, it was incumbent on the Senate, regardless of the motivations or failings of Democrats, to conduct a serious investigation, not to shove the nominee onto the Court.

It’s awful that Kavanaugh’s family is suffering. Kavanaugh is suffering, too, but he deserves none of our sympathy. Like his patron Trump, Kavanaugh has been revealed to be all about himself.  He knew he had skeletons in his closet, from prep school through his Bush days. He knows we’re in the #MeToo era. He knows there are plenty of other judges who could have ably added the 5th vote that conservatives and corporations want on the Court.

Kavanaugh could have politely declined the nomination, saying in private simply that he didn’t want to dig up the Bush era allegations and risk trouble for the GOP. Instead, he thought he could get away with it.

Or he could have come clean when the allegations surfaced, and withdrawn, or pleaded for forgiveness and understanding for horrible mistakes in his youth. Instead he denied and stonewalled. And has thus created this trauma for his own family, his accusers, and others.

But it does appear, after Jeff Flake said he would join his ten fellow Republicans in recommending Kavanaugh’s nomination, that he will join the Supreme Court.

If Kavanaugh is confirmed, it will be as ugly and consequential a moment as can be imagined in modern America. It will say, once again, that victims of sexual assault, and women, just don’t matter in our country.

It doesn’t help that Kavanaugh’s broad view of presidential power and immunity fits nicely with Trump’s belief that the U.S. justice system is his to manipulate for his own ends.

The secret slogan of the Republican Party for years has been “Rich People and Angry People Coming Together.” Donald Trump has been the great unifier of this cause, using the racial grievances and fears of old, low- and middle-income whites as a mandate for tax cuts for the wealthiest, an end to worker and consumer protections, the deep corruption of government policies by special interests. And Brett Kavanaugh has now revealed himself to be the privileged but angry man ready to fulfill Trump’s mandate on the Supreme Court — a nasty, vengeful, entitled partisan masquerading as Justice.