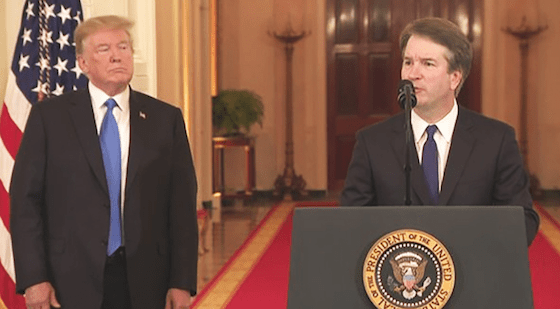 It was only a matter of time before President Trump declared that Brett Kavanaugh has been Treated Very Unfairly™.

In remarks to reporters before a trip to hurricane-ravaged North Carolina, Trump, according to the White House transcript, commented on senators weighing the Kavanaugh nomination:

At the United Nations a few days later, Trump said that Kavanaugh “has been Treated Very Unfairly by the Democrats.”

President Donald J. Trump, signing the Music Modernization Act, said that under the prior law, songwriters “were Treated Very Unfairly. They’re not going to be treated unfairly anymore.” Of course, songwriters aren’t necessarily right wing. But Trump needed some reason to sign the law.

At a White House press conference today, President Donald J. Trump said, “It isn’t good what the media is doing. I am being Treated Very Unfairly.”

Enter Sandmann. It was, again, inevitable Trump would declare that the Covington Kentucky students — the ones recorded smirking and making rude comments during a Lincoln Memorial standoff with a Native American activist and others — “were treated unfairly.”

In an interview aired yesterday, Super Bowl Sunday, Trump told CBS News, “I said to Canada, look, we have a great American company known as the NFL, and they were being hurt and treated unfairly, the NFL, by Canada for a long time.”

In his State of the Union address tonight, Trump said, “For years, the United States was being Treated Very Unfairly by NATO — but now we have secured a $100 billion dollar increase in defense spending from NATO allies.”

In an interview presented today on Fox Business, Trump said, “The way they’ve treated me — and we have found many crimes on the other side — these are stone cold crimes, what they’ve done, between the deletion of 33,000 emails and many, many other things — Comey’s lying, all of the Brennan lying, the lies to Congress — and these are just absolute lies to Congress. Clapper lied to Congress. Nobody does anything. If somebody — they all say Flynn — I don’t… anything about what he said, but the FBI said he didn’t lie. Mueller said he did lie. So what’s that all about? And then they destroy a man who is a General and a respected man for many years. They’ve treated — we have been Treated Very, Very Unfairly. All because Jeff Sessions didn’t have a clue. OK?”

In remarks yesterday in Burnsville, Minnesota, Trump told a crowd of business owners and other supporters, “I think they’ve Treated you Very Unfairly on immigration…. I think you’ve been treated extremely unfairly in the world of immigration.”

According to the Mueller special counsel report released today, Trump asked outside adviser Corey Lewandowski to tell Attorney General Jeff Sessions to give a speech that said, “I know that I recused myself from certain things having to do with specific areas. But our POTUS … is being Treated Very Unfairly.”

Questioned in the Oval Office by a reporter regarding World Press Freedom Day, Trump said, eventually, “”So, I want to see freedom of the press and I get treated fairly by some press, but I get Treated Very Unfairly by other press.”

Asked in a Fox News interview about his reaction to Congress pursuing the Russia investigation in the wake of the Mueller report, Trump said, “I think we’ve been Treated Very Unfairly.”

In remarks today before Marine One departed the White House, Trump said, “We’re having a little squabble with China because we’ve been Treated Very Unfairly for many, many decades — for, actually, a long time.”

He also said of the Senate Intelligence Committee’s effort to get Donald Trump Jr. to return for more testimony: “It’s really a tough situation because my son spent I guess over 20 hours testifying about something that Mueller said was 100 percent OK. And now they want him to testify again. I don’t know why. I have no idea why. But it seems very unfair to me.”

Before leaving the White House for Japan, Trump discussed the possibility of more pardons for U.S. troops charged with war crimes: “Some of these soldiers are people that have fought hard and long. We teach them how to be great fighters, and then when they fight sometimes they get really Treated Very Unfairly. So we’re going to take a look at it.”

Speaking in Osaka, Trump criticized the Obama administration for its negative reaction to Turkish president Tayyip Erdogan buying a weapons systems from Russia; Trump said of Erdogan, “As soon as he bought it, people went back to him from our country and they said, ‘Listen, we don’t want you to use that system because it’s not the NATO system.’ He got Treated Very Unfairly.” 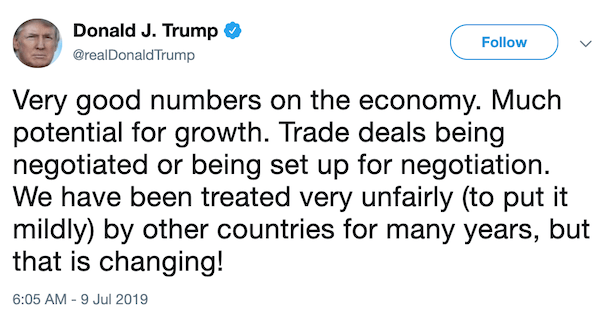 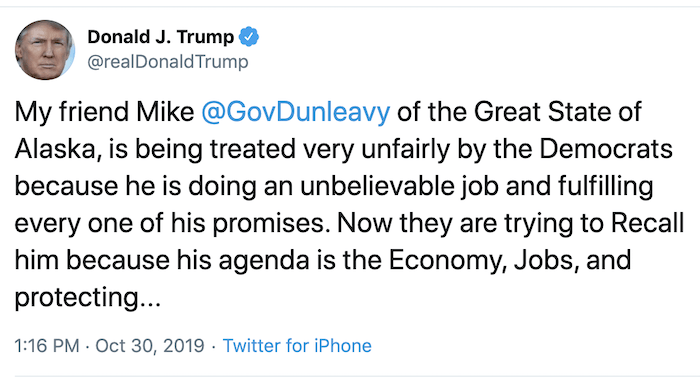 During the House of Representatives floor debate on impeachment of President Trump, Rep. Barry Loudermilk (R-GA) contended, “Pontius Pilate afforded more rights to Jesus than the Democrats have afforded this President in this process.” Asked by reporters about Loudermilk’s comment, Trump aide / sycophant Kellyanne Conway said she didn’t “like many Jesus comparisons,” but declared, “I think the President is being Treated Very Unfairly.”

As we enter the new year and election year, I’m done adding to this page. Trump’s endless claims that he and his friends are being Treated Very Unfairly reflects his decades of collected grievances, despite a lifetime of entitlement. It reflects the angry, vengeful indignation of someone rightly accused. Yet, as is usually the case, there is a method to Trump’s uninformed immaturity. His grievances play to a base of angry, aggrieved people — professional conservatives as well as struggling and striving people across the country — who despise the “elites,” by which they mean entitled, affluent liberals. Before he leaves office, however that occurs, Trump will likely pardon an arena’s worth of folk: crooked business cronies, GOP donors, right-wing talk radio hosts, war criminals and vigilantes, and other sycophantic suck-ups, plus his entire family and, the most Treated Very Unfairly, himself. It will be an appalling, shameless act; in other words, just another day in TrumpWorld.

COVID-19 update. Trump today at the White House: “I don’t know what happened with our country, but the Christian faith is treated much differently than it was. And I think it’s Treated Very Unfairly.”

Remarks by President Trump in a Roundtable with Restaurant Executives and Industry Leaders: “I think we’ve been Treated Very Unfairly by inspector generals. I can go into instances, but I’m not going to do it now.”

Trump commutes the sentence of crony Roger Stone because, according to a White House statement, Stone “was treated very unfairly.”

In case you were wondering who was responsible for the language in the July 10 White House statement, Trump, after playing golf at his Virginia club, told reporters, “Roger Stone was treated horribly. Roger Stone was Treated Very Unfairly.”