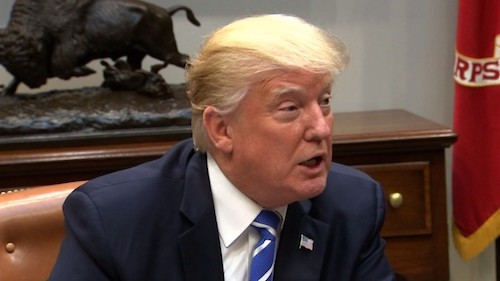 Unprecedented violent storms are attacking our shores. North Korea’s got nukes. Russia hacked our election. And malevolent, corrupt, incompetent Donald Trump is the President of the United States. It looks like the end of the world might look. But for better or worse, the world hasn’t ended yet. So, hey, let’s start the countdown.

Permanent spoiler alert: We can’t imagine anyone other than Donald J. Trump ever occupying the top spot in the rankings. But we won’t get tired of him winning. Believe me

Hired to be the adult in the room addressing the Russiagate probe, after long-time Trump mouthpiece Marc Kasowitz came “under scrutiny … for firing off profanity-laden emails to a stranger,” corporate criminal lawyer Ty Cobb spent an extraordinary amount of time the other night firing off profanity-laden emails to a stranger, emails in which he bragged Trump/Scaramucci-style about his accomplishments, philanthropy, and the financial sacrifice he’s making to serve in the White House, and asserted that he’s doing the job because “more adults in the room will be better.”

Perhaps it’s refreshing to know that Trump’s lawyers are so ready to engage with the common man, and even the troll man, but man, what a winning personality Cobb has. It’s great to know that Cobb, who recently explained to a reporter “I have rocks in my head and steel balls,” is bringing to bear his people skills trying to convince special counsel Robert Mueller that Trump didn’t engage in obstruction of justice, when in reality Trump totally did.

Cobb is not to be confused with corporate criminal lawyer John Dowd, another member of the Trump Russiagate legal team whom we hoped was an actual adult. Dowd, in the wake of the Charlottesville controversy, forwarded to a long list of people an email from a right-wing conspiracy theorist defending Robert E. Lee and the confederacy and claiming that Black Lives Matter “has been totally infiltrated by terrorist groups.” Dowd’s defense to the Times before hanging up?: “People send me things. I forward them.”

In a prepared statement delivered prior to his closed-door Senate interview on Thursday, Trump Junior claimed, reports the New York Times, that “he was initially conflicted” about meeting with the Russians peddling dirt on Hillary from the Kremlin and that he always intended to confer with lawyers about the appropriateness of using information from the meeting. Not quite what he said when the news of the meeting first broke, when he, like his dad, dismissed the controversy as no big deal, saying it was normal to gather “opposition research.”

In case a vacation caused you to miss this New Yorker article about Wall Street investor Carl Icahn, who resigned his post as an unpaid adviser on regulatory matters to President Trump on August 18, hours before the article was published, please read it. As Bloomberg and the Times had previously reported, while holding a White House title, Icahn was pushing Trump and White House officials for a change in an EPA ethanol rule, a change that EPA had refused to make in the past when Icahn pushed, a change that would benefit Icahn’s investments. Turns out, also, that when President-elect Trump had Icahn help interview Scott Pruitt for the EPA administrator job, Icahn raised the same ethanol issue with Pruitt. This conflict of interest was so blatant, so egregious, that the Trump White House actually shut it down. And dude doesn’t even need more money; it’s just about winning.

Cohn and Mnuchin continue to endure the indignities of, for example, being completely blindsided by their boss spontaneously making a funding deal with the Democrats in the Oval Office, or their boss saying that folks who participated in a Nazi/Klan hate march were “very fine people.” Why do they do it?  The ex-Goldman Sachs bankers so badly want to get the Cohnuchin tax “reform” package, which, as Ann Coulter will tell you, is just a present for Wall Street.

DeVos’s embrace of predatory for-profit colleges is breathtaking; pressed by Trump crony Newt Gingrich, DeVos is rapidly destroying all the reforms made by the Obama administration to protect students and taxpayers against college ripoffs that prey on veterans, single moms, and others striving to build a better future.

DeVos’s department sent a letter last week to the U.S. Consumer Financial Protection Bureau terminating the department’s agreements with the CFPB to share information about abuses against students. The hostile letter to another component of the federal government directly attacked the CFPB, which has consistently worked to advance the interests of students against predatory scams.

And DeVos on Thursday announced she was abandoning her Department’s policies to protect victims of campus sexual assault.

Describing the Dreamers debate within the administration, the New York Times wrote that Attorney General Jeff Sessions and domestic policy adviser Steven Miller were opposed by “two formidable foes — the president’s daughter Ivanka Trump and his son-in-law, Jared Kushner, who are both White House advisers and encouraged Mr. Trump to extend protections to the estimated 800,000 people protected under DACA.”

Does “formidable” now mean that you can keep convincing people that you have some humanity, and some influence on the president, when there’s no evidence of either? Paris agreement, transgender ban, equal pay, Charlottesville, DACA — oh, we’re always pulling for you, Javanka. But in truth you’re doing nothing for us.

The deadly wrecks of Harvey and Irma are what climate change looks like. Yet Scott Pruitt, bound to his polluting patrons, has done nothing but cancel government efforts to fight climate change. Pruitt is literally destroying our planet.

Minor point, maybe, but Pruitt is also destroying the EPA. This week’s example: His team has put a Trump campaign operative with little environmental policy background, one John Konkus, in charge of approving all EPA research grants. According to the Washington Post, Konkus has told staff that “he is on the lookout for ‘the double C-word’ — climate change — and repeatedly has instructed grant officers to eliminate references to the subject in solicitations.”

Couldn’t suppress his smile at the Justice Department as he publicly unwrapped the present he wanted most from President Trump, the possibility of deporting the Dreamers.

Our White Supresident danced around DACA, blending his incompetence, alt-right branding concerns, and a tiny twinge of conscience, as he toyed with 800,000 young people who deserve a future in America.

With Harvey and Irma’s devastation all around us, Trump is still pushing policies and rhetoric that deny climate change, while demonstrating that he hasn’t the first idea how to load supplies into a truck.

With Putin’s election hacking presenting an existential threat to our democracy, Trump continues to equivocate about whether Russia was responsible.

With political and racial divisions tearing at the seams of America, Trump endlessly stokes those divisions to maintain the love of his nativist base.