posted at 9:17 pm by David Halperin 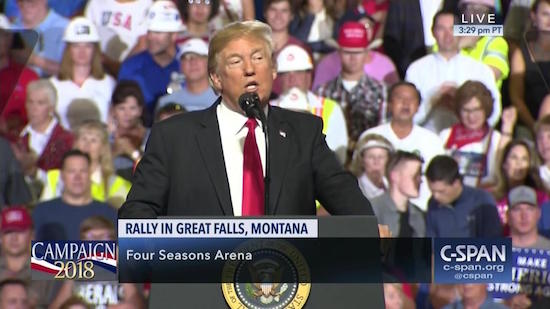 Actually, don’t hold your breath. Leonard Leo is satisfied with all the finalists, so there’s no real drama around the announcement, despite the obvious efforts by you-know-who to create some. But there should be drama around the confirmation process. Susan Collins and Heidi Heitkamp, I’d love for you all to try to stay off this top ten list.

U.S. ambassador to China Terry Branstad also has a son named Eric, who left a job in the Trump Commerce Department in January. Branstad Junior gave a speech in Shanghai in which he stressed his personal relationship with Donald Trump while promoting the giant public relations firm he’s now joined, Mercury Public Affairs. He noted that Mercury is opening a China office, and the invitation to the speech indicated that Eric still works with Commerce secretary Wilbur Ross. This is textbook swamp, the thing Trump insists he’s draining.

Scott Pruitt’s replacement was until recently a well-paid lobbyist for fossil fuel interests, including the bombastic coal baron Bob Murray, and he pledges to continue the larger corrupt grift Pruitt was running at EPA: handing over policy to polluting, climate-killing industries.

Clown Lawyer now says Trump won’t sit with Mueller until Mueller shows evidence that Trump committed a crime and that Trump’s testimony is essential to completing the Russia probe. He should add: until Mueller proves that Trump was born in Kenya.

Presumably Mueller’s team has stopped paying attention to Clown Lawyer and is dealing with the Raskins, but in any case he should just issue the subpoena when he’s ready.

Trump enabler / cheerleader Jordan has no recollection of the “cesspool of deviancy” that wrestlers say surrounded the Ohio State program. He says it’s the Deep State in action. I’d like to see the Deep State’s ace lawyers Rod Rosenstein and Hillary Clinton get an hour to question Jordan about this mess. Unless he would prefer to go back in time and be examined by Dr. Strauss.

Thanks so much for protecting the country from Trump going off the rails.

Also, it’s now been nine and a half months and still no apology from Kelly to Representative Frederica Wilson and Gold Star widow Myeshia Johnson for his disgraceful and false comments following the death of U.S. Army Sgt. La David Johnson.

Her proposed rule to replace the Obama “borrower defense” regulation — sitting in draft inside the administration now — adds insult to injury against veterans, single parents, and others deceived by for-profit colleges: she creates insurmountable barriers for these students to obtain debt relief, and justifies the rules by painting the students as con artists. The real con artists — operators of predatory colleges who rip off students and taxpayers alike — get everything they wanted.

Said he doesn’t think Congress can do much to address the issue of school shootings. This symbol of swampy special interest venality, and enabler of a crooked president, may yet overtake Trump in these rankings some week. Maybe.

His final term was one big right wing dump. And now he’s handing the Court to Trump. Trump, who has demonstrated profound disrespect for multiple provisions of the Constitution, and who himself is implicated in ongoing criminal investigations. Trump, who is likely to appoint a justice who will trash the few areas of law where Kennedy was sometimes okay — abortion, LGBT rights, affirmative action. Trump, who made time after his first address to Congress to approach the flatterable-as-Trump Kennedy and note that Kennedy’s son, Justin, was the Trump family’s Deutsche Banker. Trump: “Say hello to your boy — special guy.” Kennedy: “Your kids have been very nice to him.” America: fucked.

Little Trump Wannabe– who used taxpayer funds for fancy and unwarranted travel and meals, souvenir pens, tactical pants, and a cone of silence; who forced staff to fetch his lotion, seek out a used Trump mattress, help his wife find a job, and research whether he could break his lease; who obtained sports tickets, discounted rent, and other things of value from industry lobbyists; who oppressively lunched in the White House mess in hopes of another chance to suck up to POTUS and scheme to become attorney general; and who apparently engineered the selective redacting of his published schedule and FOIA’ed documents — wrote a self-pitying resignation letter that accepted zero responsibility.

He’s his own man now, ignoring the generals he once revered, Kelly and Mattis, presumably because they sometimes present him with facts and sober advice. His reams of tweets and his Montana and other campaign speeches were ignorant, narcissistic, racist, misogynistic, reckless, lying, authoritarian garbage.

He complained to the end about having to dump the crooked Pruitt, since Pruitt had endlessly flattered him.

While again pissing on NATO and the EU, Trump set up his impending love match wth Putin with a tweet exclaiming, “Russia continues to say they had nothing to do with Meddling in our Election!” Great! But all the Evidence indicates Otherwise!

Thousands of children, some under 5 years old, are still separated from their parents at his orders, and the Commander-in-Chief spent Saturday working feverishly to reunite them. Just kidding. He played golf.

And, again, he’s accomplished little, other than Mitch Connell’s twin wet dreams of a tax cut for the rich and a Federalist Society judiciary. He definitely doesn’t know how to win a trade war.