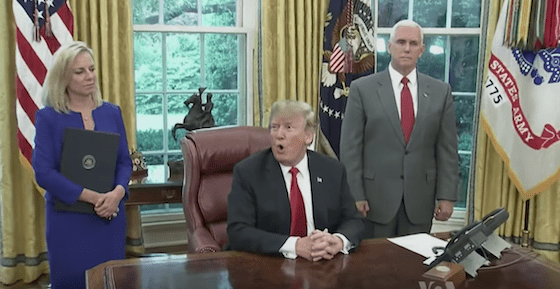 If Trump is still president in 2020, and if he is defeated that November (neither givens, but both real possibilities), it may well be up to generals Mattis and Dunford, or whoever is left running the Pentagon, or maybe FBI director Wray, to make sure Trump actually vacates the White House on inauguration day. That moment may be more tense than anything we’ve seen so far. Because don’t ya think there’s maybe just a little chance Trump would say the election was rigged and insist on staying? I kinda do.

With his tweet calling for the firing of the U.S. attorney general and the end of the special counsel probe into Russia’s interference in the 2016 U.S. election, Digital Brad underscored that he’s not your father’s re-election campaign manager. No, he’s the campaign manager for a crook.

9. Corey Lewandowski, outside advisor to the President. Last week’s ranking:–

Already grotesque for making big money from big corporations by peddling access to Trump, Lewandowski’s TV womp womp of the story of a 10 year old girl with Down Syndrome who was separated from her mother at the border apparently led a DC speakers bureau to dump him. Damn, I was looking forward to treating my friends to “An Evening With Corey Lewandowski.”

Of course, no one loves kids with Down Syndrome more than Trump, so right after womp womp, he brought Lewandowski aboard Air Force for a political trip out West.

Wilbur got caught this week not falling asleep in public but instead shorting stock in suspicious circumstances and contradicting himself on the census citizenship concept.

Politico exposed a web of blatant conflicts of interests involving a Zinke family foundation, a big railroad corporation, a proposed Montana real estate deal, the drilling giant Halliburton, Interior Department fracking decisions, a microbrewery, a Bavarian restaurant, and a peace park to be paved into a parking lot. His fellow environment-wrecker Pruitt is getting most of the headlines, but Robbin’ Ryan is giving Stealin’ Scott a run for his money in the Disgracefulness Department.

What were Nielsen and Miller supposed to do — never eat in a Mexican restaurant again?

Nielsen was supposed to tell the truth, have integrity, and not preside over the systematic and hard-to-undo separation of little children from their parents.

And Miller has made himself a full-body echo of Trump’s narcissistic brain. Politico reports that Miller:

speaks to the president in an effusive fashion, constantly telling Trump that the media are treating him unfairly. He frequently tells the president that his speeches or executive orders are groundbreaking or that he’ll be the most consequential president ever, according to a Republican close to the White House.

Miller is, thank heavens, as incompetent as he is morally twisted — good at getting the president riled up to do anti-immigrant and bigoted things but not good at the details or implementation needed to avoid practical and political disaster.

Media reports suggest that Kelly has gone full-on passive aggressive, completely giving up on taming toddler Trump. But when it comes to the separation of children policy, Kelly was way into it.  In an NPR interview in May, you will recall, Kelly defended the policy, offering his own bigoted musing about how people crossing the border “don’t integrate well; they don’t have skills.”

Sessions this week told CBN News that the administration “never really intended” to separate children from parents. But in early May, he had warned, “If you don’t want your child to be separated, then don’t bring them across the border illegally. It’s not our fault….”  Bless his heart. They (excluding Miller) may not have loved separating families, but they damn well intended it — it wasn’t a mistake.

President Donald J. Trump held an Oval Office ceremony to sign an “important” executive order that he said would “solve” the problem of families being separated at the border. Except, of course, his own policy created the problem, and the new order solved nothing; instead it was a hastily-prepared mess that produced chaos in his administration and at the border. Mission Accomplished.

Exterminator Trump tweeted that Democrats “want illegal immigrants… to pour into and infest our Country.”

This morning, Trump reaffirmed that nobody loves our Constitution and laws as much as he does by tweeting: “We cannot allow all of these people to invade our Country. When somebody comes in, we must immediately, with no Judges or Court Cases, bring them back from where they came.”

Trump pumps up MS-13 as a huge threat to people in the U.S. but mocks the claims of people fleeing MS-13 violence in Central America as coached falsehoods. Help me understand. #AmericaFirst #racism

Trump described the often harrowing journey of Central Americans to the U.S. border thusly: “They walk through Mexico like it’s walking through Central Park.” (Trump may have been speaking from ignorance about both matters he was comparing; in 2005, he reflected on marriage and child-rearing with Howard Stern: “I mean, I won’t do anything to take care of them. I’ll supply funds and she’ll take care of the kids. It’s not like I’m gonna be walking the kids down Central Park.”)

Trump reportedly threw two Starbursts toward Angela Merkel in a passive-aggressive gesture after agreeing to sign the G-7 communique — and soon after reneged on his promise. Starbursts?

After it was reported that Trump received boos from some House GOP members when he made negative remarks about Rep. Mark Sanford (R-SC), Trump tweeted that instead “they applauded and laughed loudly” at those remarks. In response, Rep. Justin Amash (R-MI) tweeted, “House Republicans had front row seats to @POTUS’s dazzling display of pettiness and insecurity. Nobody applauded or laughed. People were disgusted.” Rep. Ryan Costello (R-PA) called Trump’s tweet “categorically false.” Rep. Raul Labrador (R-ID), said, “There was absolutely no applause and I think it’s unfortunate that that incident happened.”

Trump shoved his reckless “Space Force” idea down the throats of Pentagon brass and told his audience the Space Force and the Air Force would be “separate but equal” — OMG he needs to learn history.

Trump did his stump bit again about how he’s “smarter,” “richer” and has “a much better apartment” than the bogeyman “elites” who oppose his policies. And how “I became president and they didn’t.”

On Saturday the president offered this six-word tweet: “The Russian Witch Hunt is Rigged!” Certainly a fresh new thought from him.

And the world’s greatest dealmaker has still not negotiated a single deal for our country or even in Washington. He’s just complained a lot.