posted at 5:37 pm by David Halperin 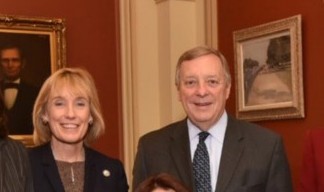 Senators Maggie Hassan (D-NH) and Dick Durbin (D-IL) today introduced the Preventing Risky Operations from Threatening the Education and Career Trajectories of Students (PROTECT Students) Act of 2019, a bill that would enshrine in law many key reforms sought by advocates for veterans and other students in order to prevent predatory practices by for-profit colleges.

Many in the for-profit higher education industry, aided by hordes of well-paid Washington lobbyists, have fought to oppose these very reforms. Given the industry’s deep ties to the Trump administration, especially the Betsy DeVos Department of Education, and to campaign contribution recipients in Congress, many of the bill’s provisions may never make it into the next Higher Education Act, even if somehow Congress manages to enact one. But the bill makes a powerful statement about what the federal government should be doing to protect low- and middle-income students from predatory practices — and to protect the taxpayer investment in higher education. And it puts renewed pressure on industry backers and lobbyists to defend the indefensible: deceptive advertising and recruiting, financial aid fraud, low-quality instruction, astronomical prices, and fiscal irresponsibility among many for-profit schools.

Durbin, the Senate Democratic whip, has for many years been a fearless champion of students harmed by predatory schools. Hassan, who sits on the Senate committee with oversight of education, served as New Hampshire’s governor until entering the Senate in January 2017, and as commander of that state’s national guard undoubtedly became familiar with the education struggles of veterans and service members.

The senators’ press release makes clear how badly this industry has been behaving, and what the consequences have been: “The recent collapses of Education Corporation of America, Vatterott Colleges, and Dream Center Education Holdings in the past few months show that for-profit colleges continue to represent a disproportionate risk to students and taxpayers even years after the collapses of Corinthian Colleges, Inc. and ITT Tech. These companies raked in billions in federal taxpayer funds that enriched executives and investors while leaving tens of thousands of borrowers with huge amounts of debt that they’ll never be able to repay, credits or degrees of little value, and few job prospects.”

The release also justly hits the DeVos Department for its efforts “to roll back key reforms put in place to improve the Department’s ability to prevent and respond to future collapses in the wake of Corinthian—consistently putting the interests of fraudulent, for-profit colleges ahead of students and underscoring the need for additional protections under the law.”

The bill’s reforms include:

— Closing the 90/10 loophole that leads to exploitation of veterans and servicemembers. The current federal 90/10 rule  requires for-profit colleges to obtain at least 10 percent of their revenues from non-federal sources, in order to protect against sending students and federal dollars to schools that few would spend their own money on. But a loophole counts federal funds from the Department of Veterans Affairs and Department of Defense as non-federal. The loophole has led to aggressive and predatory recruiting of our troops, veterans, and military families. The bill would end this loophole, and restore the federal ceiling to 85 percent, where it stood until industry lobbyists got it changed in 1998.

— Codifying the gainful employment and borrower defense rules. The bill would enact into statute the 2012 gainful employment rule, which penalizes for-profit and career college programs that consistently leave large numbers of students with insurmountable debt, and the 2016 borrower defense rule, which would create a reasonable path for students ripped off by their colleges to have their federal loans cancelled. Both rules were the result of hard-fought regulatory battles between industry and student advocates during the Obama administration, and neither rule (especially gainful employment) does enough to protect students and taxpayers. But the DeVos administration has tried desperately to effectively destroy both rules, and enacting them would be a major step forward.

The bill would also toughen one aspect of the borrower defense rule by prohibiting schools that get federal aid from forcing students to give up their right to sue their schools through mandatory arbitration clauses or class action bans. Predatory schools have consistently used such ripoff clause provisions in their enrollment agreements, while no legitimate state or non-profit schools have required them.

— Strengthening the current ban on paying sales commissions to college recruiters. Education should not be sold to students like used cars. Past investigations have confirmed that allowing so-called incentive compensation payments to college admissions staff leads to deceptive and abusive recruiting practices. The bill would tighten enforce of the ban and extend it beyond recruitment and financial aid activities, to activities and operations including job placement and loan default avoidance.

— Cracking down on fake non-profit colleges. In recent years, a number of for-profit schools, large and small, have sought to escape the stigma that their industry’s bad behavior created, and escape certain regulations that apply only to for-profit schools, by converting to non-profit status, but locking in relationships that allow former owners and insiders to keep making big money through connected for-profit businesses.

The IRS and accreditors approved these moves, but in 2016 the Obama administration put its foot down, rejecting the converted status of CollegeAmerica and other schools operated by the Center for Excellence in Higher Education, as a scam transaction that primarily benefited the prior for-profit owner, one Carl Barney. But the DeVos Department has reversed course, leading to debacles like the collapsing Dream Center schools, and the deceptive “We’re Non-Profit!” messaging of newly non-profit schools like Grand Canyon and Purdue Global (formerly Kaplan University).

The bill would establish a definition of a non-profit school that would guard against phony non-profit structures, prevent colleges from marketing themselves as non-profit until the Department of Education gave final approval, and require converted for-profit colleges to continue complying with federal laws governing for-profits for at least 5 years.

— Creating an interagency committee to coordination for-profit college oversight and enforcement. In the last decade, many for-profit colleges have been the subject of federal or state law enforcement investigations for deceptive practices and other abuses. Federal agencies with responsibility in this area include the Justice Department, FTC, CFPB, VA, and the Pentagon, in addition to the education department. The Obama administration established such a task force, but the Trump administration abandoned it. The Hassan-Durbin bill would require it.  The bill also would codify an Enforcement Unit within the education department to crack down on abuses; this was another Obama-era reform that the DeVos team has gutted.

— Establishing a complaint resolution system. The bill would enact into law the feedback system created by the Department of Education in 2016 to track and resolve student and other complaints against predatory abuses by colleges and student loan servicing companies — reversing DeVos anti-reforms that have included banning anonymous complaints and complaints about general or systemic problems not related to a specific individual.

— Enhancing civil penalties, state enforcement, and private rights of action.  The Durbin-Hassan bill would Increase civil penalties for schools and their contractors that violate federal aid rules, including through misrepresentations. It also would permit state attorneys general and student borrowers to enforce the regulations in court, helping to ensure that students and taxpayers don’t have to rely on the Department of Education for action.

One more reform could make a difference in preventing students from choosing bad colleges: Requiring the Department of Education to streamline and better present information it collects about schools that receive federal student aid. Currently, evaluating government information on schools requires visits to separate Department web pages addressing 90/10 compliance, gainful employment compliance, accreditation, loan default rates, financial stability (HCM), school inspections, and other topics, plus one site called College Navigator and another called College Scorecard. Many of the sites offer their information only on downloadable spreadsheets. Data is often several years behind. And the Department does not maintain a page cataloguing law enforcement investigations of schools.  (I do.) In addition, the Department’s various data pages don’t tell visitors who owns particular schools, so to aggregate performance data for one company, one has to research that information and then pull the various school measures together.

While it seems like these kinds of details should be fixed by agencies without Congress mandating it, advocates for students have asked for such changes for years, and it hasn’t happened.