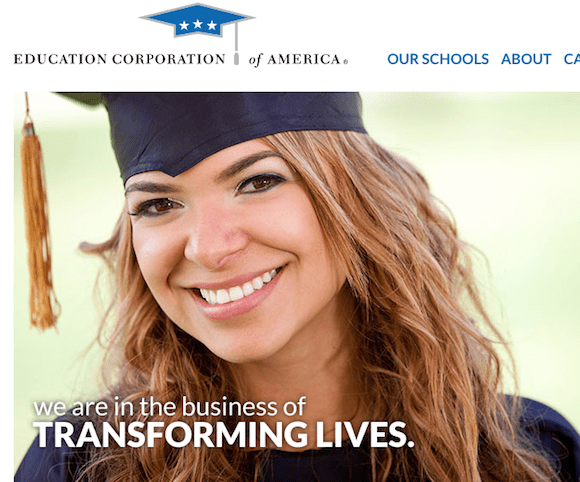 The for-profit college chain Education Corporation of America (ECA) has filed a lawsuit against Secretary of Education Betsy DeVos and is headed to federal court in Alabama today, seeking an emergency order from a court to appoint a receiver, protect the school from creditors and evictions, and keep taxpayer dollars flowing to school owners.

In a complaint filed Tuesday in the U.S. District Court for the Northern District of Alabama, ECA says it “has recently experienced financial difficulties that have resulted in numerous lawsuits” and threats from creditors and landlords. It is asking the court to declare that it can restructure its finances and close some campuses without losing access to federal student grants and loans. ECA says it has about 20,000 students currently enrolled at its schools, which include Virginia College and New England College of Business.

Why is ECA seeking to enter into “receivership” rather than bankruptcy if it wants protection from its creditors? Possibly because federal law prohibits the use of federal grants and loans at schools that are in bankruptcy (a prohibition that lawyers for predatory schools have sought, without success, to overturn). ECA’s flagship school, Virginia College, has been getting about 85 percent of its revenue from U.S. Department of Education student grants and loans. So, no federal dollars, no Virginia College.

Virginia College is one of a dwindling number of institutions still accredited by the troubled accreditor ACICS, which was removed from recognition by the Department of Education in the last year of the Obama administration because of ACICS’s record of lax oversight in the face of for-profit college abuses. In August, another accreditor, ACCET, rejected Virginia College’s application for accreditation.

Betsy DeVos’s Department of Education, which is seeking to protect predatory for-profit colleges, is now moving to reinstate ACICS.

ECA announced last month that it would close 26 campuses, about a third of its ground operations, by early 2020, including Virginia College campuses, as well as Brightwood Career Institute, Brightwood College, Ecotech Institute, and Golf Academy of America schools. The Brightwood College campuses were previously called Kaplan College and were purchased from Graham Holdings in 2015. ECA campuses are spread across the country from California to Pennsylvania, with a heavy concentration in the south.

ECA says in its complaint that it has unsecured debt of approximately $47 million. The DC law firm of DLA Piper represents ECA in the case.

ECA schools have often performed poorly.  Of the 800 career and for-profit college programs that flunked the first test of the Obama administration’s gainful employment rule — measuring whether a program’s graduates earn enough to pay back their student loans — 19 were at Virginia College schools; another 5 were at Brightwood schools.

Avy Stein, a Chicago private equity man who is the board chair of ECA, was a few years ago one of the most aggressive lobbyists against the gainful employment rule. According to the New York Times, Stein, in a meeting, promised to “make life rough” for then-Senator Tom Harkin (D-IA) if he proceeded with oversight of for-profit colleges. (Stein denied saying that.)

Betsy DeVos’s Department of Education, which, again, is seeking to protect predatory for-profit colleges, is now seeking to eliminate the gainful employment rule.

Former Rep. John Kline (R-MN), who retired from Congress last year and served as chair of the House education committee, is now on the ECA board.

It’s funny that Education Corporation of America is, formally speaking, suing Betsy DeVos, because Betsy DeVos is ECA’s best friend. DeVos is trying to revive Virginia College’s discredited accreditor, ACICS, and cancel the gainful employment rule that is giving Virginia College and other ECA schools such trouble. But these DeVos anti-reforms may be coming too late to save poor performing companies like ECA.  And that’s because the public, including prospective students, are learning the truth.

UPDATE 10-19-18 10:00 am:  From court docket entries it appears that Judge Abdul K. Kallon, following a hearing, has kicked the decision to an October 29 hearing on ECA’s motion for preliminary injunction.

UPDATE 11-02-18 10:30 am: ECA’s accreditor, ACICS, has issued a show cause order to the company as to why “accreditation of all its institutions should not be withdrawn.”

UPDATE 11-05-18 5:45 pm: Judge Kallon today dismissed ECA’s lawsuit, ruling that, because ECA did not show that it has submitted a receivership plan to the Department or that the Department has rejected such a plan, there is no live controversy and thus no jurisdiction.