posted at 2:14 pm by David Halperin 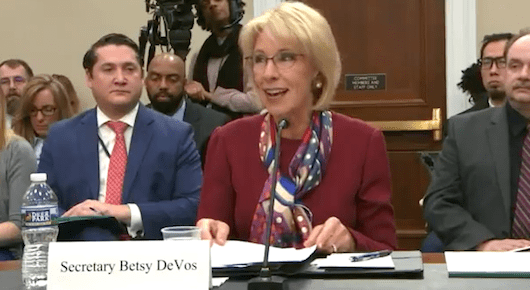 While some predatory college chain operations, like Dream Center/EDMC, Education Corp. of America, and Vatterott, have been collapsing under the weight of abuses and mismanagement, other for-profits are now bragging to Wall Street investors that boom times are back. Two of the most prominent examples — Grand Canyon University and Career Education Corp. — have benefitted from privileges granted by, or close ties to, the Donald Trump-Betsy DeVos Department of Education, which has done everything possible to eliminate rules that protect students and taxpayers from predatory college abuses.

As my colleague Bob Shireman noted on Twitter today, Grand Canyon had an earnings call this week, on which CEO Brian Mueller bragged to investors about the “tailwind” the school has had in its marketing, producing a “record 7000 new students.” Mueller reported a remarkable 34.3% operating margin.

Thing is, Grand Canyon’s apparently effective TV ads, and website, endlessly tell prospective students that the school is “non-profit,” in a world where deceptive and abusive practices by for-profit colleges have destroyed that industry’s reputation.

So how is a non-profit school conducting a Wall Street earnings call?

Because the DeVos Department has blessed a series of troubling deals that allow a for-profit college to be “serviced” by connected for-profit companies. The non-profit school benefits from the elimination of the for-profit stigma, reduced regulations, elimination of taxation, and eligibility for more state and charitable grants. Meanwhile, the for-profit, and its owners and executives, get to siphon off a lot of the revenue, much of it from taxpayer-funded grants and loans.

“Being out there a million times a day saying ‘we’re nonprofit’ has had an impact,” Mueller told the investor call,  adding that actual non-profit colleges had “bullied” Grand Canyon’s target customer “every single day for ten years that you shouldn’t go to a for-profit institution.”

Mueller explained how students are quickly locked in under the new non-profit aura: “They see our ad & call Grand Canyon and within 72 hours everything is done. Applications filled out. Transcripts evaluated. Financial aid is done. They go to our website, they see who Grand Canyon is and say, ‘this sounds good,’ and they start.”

As Shireman notes, Grand Canyon isn’t required to invest its big revenues into the university, as would be the case with a genuine non-profit; instead the profits are sucked out by Grand Canyon’s for-profit arm, for investors, for Mueller’s salary, for whatever they want.

DeVos’s Department has approved similar disturbing non-profit conversion deals — Kaplan-Purdue, Bridgepoint/Ashford, EDMC-Dream Center. And, although no one is saying anything publicly, DeVos may have reversed a decision made at the end of the Obama administration to reject one of these deals, the for-profit conversion of the CollegeAmerica/Stevens-Henager chain.

Meanwhile, Career Education Corp., one of the few for-profit giants not to pursue the non-profit conversion scam, also brags in its latest Wall Street pronouncement this week of a big increase in profits. CEC’s CEO, Todd Nelson, announced: “2018 was a watershed year for our company, with operating income the highest it has been in almost a decade.” He added, “Our balance sheet is expected to further improve in 2019…”

CEC, like Grand Canyon, has received billions in taxpayer-funded student grants and loans.

CEC’s success comes at the expense of students. Last month, CEC agreed to a $500 settlement of claims with the attorneys general of 48 states and the District of Columbia. Various state AGs were investigating CEC for deceptive practices, charges CEC has denied. New York state previously settled with CEC; in 2013 CEC agreed to pay $10.25 million to resolve New York’s claims that CEC, in its student recruiting, exaggerated its graduates’ job placement rates.

CEC has also been under investigation in recent years by the Federal Trade Commission and Securities and Exchange Commission. The predatory practices at overpriced CEC schools have ruined the financial futures of thousands of veterans, single mothers, immigrants, and others seeking to build better lives through career training.

Having shut down some of the campus brands that got in trouble with the law, CEC now operates just two chains: Colorado Technical University and American Intercontinental University.

And CEC is thriving financially under the lax oversight of the DeVos Department.

One clue to why might be personnel. DeVos’s top higher education aides all have an association with CEC:

— Acting Under Secretary of Education Diane Auer Jones was from 2010 to 2015 senior vice president and chief external affairs officer at CEC.

— Robert Eitel, senior advisor to DeVos at the Department, was vice president of regulatory operations at CEC from 2013 to 2015.

— As Republic Report discovered, the Department’s general counsel, Carlos Muniz, represented CEC in the very investigation brought by the state attorneys general, and did so even after the Senate HELP committee approved his nomination for the position.

— The acting head of the Department’s student aid office, James Manning, was, sometime between 2015 and 2017, a consultant to a student loan company run by William Hansen, who now sits on the CEC board of directors; Manning was Hansen’s chief of staff when Hansen served as deputy education secretary under George W. Bush.

Both Grand Canyon and Career Education Corporation are doing well, also, by committing to a future of providing courses mostly online, rather than at physical campuses. Online-only instruction allows schools to dramatically slash costs, but there are serious doubts about the effectiveness of such programs, especially when it comes to career education programs for relatively inexperienced students.  Of course, the DeVos Department is seeking to ease the way for for-profit companies to move their programs entirely online, without much scrutiny of quality and value.