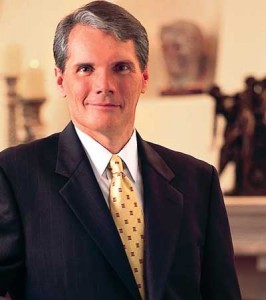 Todd Nelson resigned as chief executive of Apollo Group, parent company of the University of Phoenix, in 2006, in the wake of two controversies that ended up in court.  In the first case, Apollo, the nation’s largest for-profit college business, paid $9.8 million in 2004 to settle a U.S. Department of Education complaint that it had engaged in systematic violations of rules regulating aggressive recruiting of students.  The second, less well known, was a case brought by the U.S. Equal Employment Opportunity Commission (EEOC), several months after Nelson left, charging that for years the University of Phoenix had discriminated against  employees who were not members of the Mormon church. According to the Arizona Republic, “The University of Phoenix and Apollo were long dogged by murmurs of Mormon influence. Apollo’s longtime chief executive officer, Todd Nelson, was active in the church, and the company was said to heavily recruit church members as enrollment counselors.” The school settled that case by agreeing to pay $1.89 million — the largest payment to settle an EEOC religious discrimination case in the agency’s history.

Today, Todd Nelson is chairman of EDMC, the country’s second largest for-profit college business. EDMC, too, is embroiled in controversy, including lawsuits by the U.S. Justice Department and state attorneys general alleging fraud and recruiting abuses.  EDMC’s stock has plummeted to about a tenth of where it was a year ago, and the company is laying off teachers and cutting services to students.  This morning the company announced that enrollment and revenues had once again declined this fall. Amidst this collapse, Nelson has allowed a significant portion of EDMC’s declining resources to be allocated … to himself. He received $1,812,996 in compensation for 2009, $3,804,121 in compensation for 2010 — and $13 million in compensation for 2011.

Todd Nelson and his wife, Amy, are also major donors to Mitt Romney.  They have contributed $7,500 to the Romney campaign, and both are members of the Romney fundraising committee for Arizona. Amy Nelson also has given $50,000 to the Romney Super PAC, Restore Our Future. In making that donation, she used a Utah post office box as her address. Nelson told USA Today that his donations are not related to his business interests. “I’ve given to those who I feel can help our country,” he said. When the paper asked about his wife’s $50,000 contribution, Nelson said: “I’m aware of some of the things my wife does and some not.” Todd Nelson also donated $30,800 to the Republican National Committee in April.

Although he appears to downplay the intensity of support, it seems apparent that Todd Nelson really, really wants Mitt Romney to win the election. Indeed, as the truth catches up with the major for-profit colleges, it appears these companies are doubling down on a Mitt Romney victory as their last best hope to retain unquestioned access to a torrent of taxpayer money.

Government and media investigations have shown that many for-profit colleges use deceptive and coercive recruiting to lure veterans and low-income Americans into high-priced, low-quality programs — leaving students deep in debt, and leaving taxpayers, who fund financial aid at for-profit colleges to the tune of $32 billion a year, with wasted investments. Meanwhile, many of these companies, which get an average of 86 percent of their revenues through federal funds, have reaped huge profits. These revelations have now had a major impact — student enrollments and company stock prices are way down, and the industry appears to be in disarray.

President Obama’s administration has taken major steps to crack down on waste, fraud, and abuse by these companies. By contrast, Mitt Romney has chosen to publicly embrace this controversial industry as a cornerstone of his higher education policy, and he has promised to undo Obama reforms that would hold these schools accountable and channel federal aid to programs that actually help students.

On the campaign trail, when asked what he would do about the rising cost of higher education, Romney pointed to a for-profit college, Florida’s Full Sail University, as an innovator that knows how to “hold down the cost of their education.”  Full Sail turns out to be the third most expensive college in America, with a mixed record of helping students and at least one program at risk of losing its eligibility for federal student aid because it leaves so many students deep in debt.

But if Full Sail has overcharged students, it has been generous to Mitt Romney. The Romney Super PAC Restore Our Future has received $135,000 from Full Sail CEO Bill Heavener and another $329,900 from C. Kevin Landry and P. Andrews McLane of TA Associates, the private equity firm that owns Full Sail. Landry also has donated $89,900 to American Crossroads, the pro-Romney Super PAC founded by Karl Rove.

As Republic Report and others have documented over the course of this year, Mitt Romney doesn’t just accept money from these owners of for-profit colleges, he’s also in business with them. Mitt Romney’s son Tagg and campaign finance director Spencer Zwick run the private equity fund Solamere Capital, which was launched in 2008 with a $10 million investment from Mitt Romney and has an investment relationship with Bain Capital. TA Associates is one of the firms that Solamere Capital offers to its clients for investment. TA Associates owns not just Full Sail but a number of for-profit schools including troubled Vatterott Colleges, marked by exploitative recruiting practices and high student loan defaults. If TA gets richer, the Romneys get richer.

For-profit college employees and political action committees have donated more than $225,000 to Romney’s campaign. The political action committee of the Apollo Group, owner of the University of Phoenix, which Romney has also praised by name on the trail, has contributed $75,000 to Restore Our Future and the maximum $5,000 to Romney’s campaign, the company’s only contribution to a 2012 presidential candidate. Goldman Sachs, the number one source of contributions to Romney, owns 41 percent of EDMC, the company Todd Nelson now runs. Romney’s campaign is also the top recipient of EDMC employee support for this election cycle, with over $25,000 in donations.

Romney’s education policy paper attacks the Obama Administration’s “gainful employment” rule — an effort to channel federal student aid to college programs that actually help students learn and get jobs, rather than to programs that leave students deep in debt and ruin their lives. The biggest for-profit schools have pursued a lobbying, public relations, and litigation blitz that has watered down and delayed — but not yet eliminated — the Obama rule. Romney has pledged to put the nail in the coffin of this common sense provision. Such a backward policy step would directly benefit Romney donors, and it would provide particular aid to Solamere Capital — eight of Vatterott College’s 39 college programs recently flunked the gainful employment test that Romney now pledges to eliminate.

Romney’s professed love of the free market is belied by the nature of the for-profit college industry, as well as some other companies in which Solamere Capital invests. These enterprises recognize that often the fastest way to a quick buck is through programs that are heavily dependent on the federal government.  Once these programs get going, no matter how poorly the businesses perform, no matter how badly they mistreat consumers and fleece taxpayers, they can survive by using some of their profits to hire expensive Washington lobbyists and offer campaign contributions to block reforms and keep their profits flowing.

For-profit colleges have done well in Washington in recent years by spending lavishly to hire both well-connected Republicans like former Senate leader Trent Lott and Democrats like close Obama advisor Anita Dunn. They’ve managed to get the support not only of almost the entire Republican caucus of the House of Representatives, but also some House Democrats whose campaigns they help finance. But this year, there have been clear signs that the Obama Administration and Senate Democrats are not going to be cowed by the industry and instead have decided to pursue tougher reforms. When the industry’s main trade group, APSCU, replaced its top lobbyist, Democrat Brian Moran, earlier this year, it hired former George Bush aide Sally Stroup, giving APSCU an all-GOP top echelon — another sign that the industry has decided to put their all chips on red. A Romney victory would vindicate that strategy. Otherwise, their destructive free ride — fueled by your tax dollars — may be coming to an end.