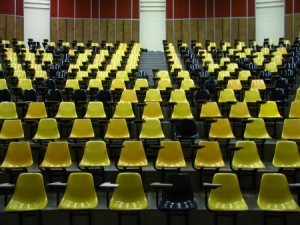 Over the weekend, a federal trial judge in Washington, DC, upheld the power of the federal government to issue its “gainful employment” rule, a provision aimed at channeling federal financial aid away from college and career training programs that leave students deep in debt. But the judge, Rudolph Contreras, held that the U.S. Department of Education failed to provide a reasoned explanation for one of the three tests imposed by its rule, and he therefore sent the rule back to the Department for further explanation.

The decision came in a lawsuit brought by APSCU, the largest trade association of for-profit colleges, and no doubt the wealthy for-profit education companies that dominate APSCU are excited. But if government officials act appropriately, and citizens speak up and get engaged, this ruling won’t be more than a minor setback in the effort to protect students and taxpayers from the abusive, predatory practices of many for-profit schools. Here are five reasons why:

1. The rule struck down was actually gift to the industry and is fixable. The gainful employment rule considered by the judge had been watered down from its original version by the White House under intensive pressure from industry lobbyists. So under this final rule, a vocational training or for-profit education program would lose eligibility for federal student aid only if the program flunked three different prongs of a test for three years in a row, measures aimed at meeting the requirement in federal law that such programs prepare students to earn a living. A program would flunk if, for three years in a row:

The district judge ruled that the first two prongs of the test were grounded in expert opinions about how much debt is too much to manage, but that the third prong was not based on any established study, industry practice, or reasoned argument.

I think it’s fair to say that the third prong was based on common sense. If two-thirds of a program’s former students — graduates and dropouts combined — can’t pay back their loans, that suggests that the program isn’t providing sufficient training to help students build careers. It suggests that the program’s tuition is too high. It suggests that many students — often veterans, people of color, parents struggling to support their families — are left worse off than when they started.  And it means that taxpayers who pay for federal student grants and defaulted student loans are often left with nothing for the investment. It’s a pretty lenient test. It seems ridiculous to keep pouring our tax dollars into a program that is leaving so many students worse off than when they started.

Just as important, though, is the fact that nothing in the law passed by Congress required such a permissive three-prong test. Under the Administration’s gainful employment rule, if a program passes any one of the three prongs, it passes the entire test for the year and incurs no penalty or risk of losing eligibility. The three-prong rule therefore bends over backward to help schools avoid flunking it.  Each prong of the test is an escape hatch, rather than an additional hurdle. Imagine if a student would be deemed to have passed the 10th grade so long as she passed just one of her classes — that’s what the gainful employment rule is like. Because the judge ruled the other two prongs of the test reasonable, the Department should theoretically be able to go back and say: Fine, two pronged-test then, not three. Flunk either prong, and you’re out.

A better rule would have been tougher, raising standards and perhaps also removing programs from eligibility without requiring that they flunk all three prongs each year. Only the loan repayment prong addresses the issue of how a program’s dropouts — as opposed to just its graduates — are faring, and thus only that prong protects against schools that particularly abuse its dropouts. Yet under the gainful employment rule a school can flunk that prong of the test every year and still maintain eligibility if it passes one of the other two.

Last week the Department released results from a one-year test run of the rules, which were scheduled to formally take effect on Sunday and start disqualifying programs after three years, in 2015. Of the programs tested, only 35 percent met all three prongs of the minimal gainful employment test.  31 percent passed two out of three, 29 percent passed one out of three. Only five percent failed all three.

Even though schools can flunk the loan repayment prong and still pass the test, there remains value in keeping the prong, from the perspective of advocates of reform: It compels schools to collect and report data on loan repayment performance and to disclose such information to students. If over time, such reporting revealed that some schools or major parts of the sector consistently left former students unable to repay their loans, that might be an impetus for strengthening accountability rules.

[UPDATE — ADDITIONAL THOUGHT ON HOW TO EXPLAIN THIS: It comes down to this — no school would ever have been penalized under the gainful employment rule for flunking the prong of the test that the judge found lacking. A program would only be penalized if it also flunked the other two prongs of the test. So the judge could have invalidated the third prong and still allowed the rule to go into effect immediately without prejudicing anyone.]

The Department of Education can, and should, assert more clearly the common sense rationale for the debt repayment prong — while clarifying when the case returns to court that it had no obligation to give schools three separate ways to escape accountability, and that the rule should go forward.

2. The decision can be appealed. Even if Judge Contreras can’t be persuaded, the government can take the case to the U.S. Court of Appeals for the D.C. Circuit, where three new judges would take a fresh look at the issues.

3. People might be outraged when they realize we’re paying for the for-profit colleges’ expensive lawyers. Since many of the for-profit colleges that are APSCU members receive 85-90 percent, or even more, of their revenue from federal student aid, that means that we’re all paying not only for the Justice Department lawyers who defended this lawsuit but also for the APSCU lawyers who brought it.  Given that the for-profits receive $32 billion a year in federal aid, why not hire the best? So APSCU is represented by one of the most powerful blue-chip firms, Gibson Dunn, and its partner Douglas R. Cox, whom, the firm boasts on its website, “played a principal role in the firm’s successful representation of the prevailing candidate before the Supreme Court of the United States in Bush v. Palm Beach County Canvassing Board and Bush v. Gore, stemming from the 2000 presidential election, and in other cases before the Supreme Court…”

4. Gainful employment is just one front in the effort to hold predatory schools accountable for abuses. Federal and state officials are taking a number of steps to protect students and taxpayers:

The new court decision increases the urgency to act on these reform efforts.

5. The whole public debate has brought media scrutiny and helped educate citizens about the predatory practices of the for-profit college industry. For-profit colleges were able to reap enormous profits in a decade when the Bush Administration turned a blind eye to evidence of extensive waste, fraud, and abuse with federal money. The Obama Administration sought accountability measures, and in response the industry has have waged an intensive lobbying, litigation, advertising, and campaign contribution blitz to keep federal money flowing into its coffers.

But the loud fight has awakened the public to the industry’s extraordinary abuses. There has been a wide range of outstanding press reporting on this issue, from local TV exposes to sharp economic analysis. Just this morning, the arch-conservative Washington Times reported on troubling scenes at local schools that scored poorly on the gainful employment measures — misleading sales pitches, low educational standards, dismal job placement and loan repayment rates. Civil rights, consumer, and student groups are strongly committed to demanding reforms. Students are starting to vote with their feet and look elsewhere for opportunity.  Strong, principled leadership from government, higher education, and the private sector can overcome the obstructionism of the worst actors in the for-profit college world and generate real reforms that truly help students build careers.