posted at 3:58 pm by David Halperin 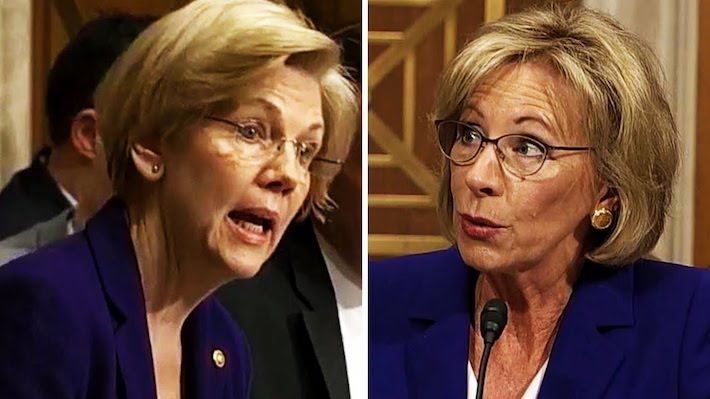 Senator Elizabeth Warren (D-MA), joined by three Senate colleagues, wrote to Trump Secretary of Education Betsy DeVos Wednesday to point out that the CARES COVID-19 relief act, as drafted, seems to exclude new funding for for-profit colleges. Warren and senators Dick Durbin (D-MA), Richard Blumenthal (D-CT), and Sherrod Brown (D-OH) also noted that the law focuses on funding to facilitate the transition to online instruction, and that many for-profit schools already are teaching mostly online and thus have less need for emergency funds. So they asked DeVos to target the new relief money to public and non-profit colleges, rather than for-profits.

Today, Betsy DeVos in effect rejected the senators’ arguments, announcing cash aid under the act that includes hundreds of millions to for-profit colleges. At the urging of advocates for students, the law does ban new emergency aid for schools that already were teaching exclusively online. But, as interpreted by DeVos, it still leaves plenty of room for bad behavior.

Anticipating that DeVos would ignore the law’s language and send money to for-profits, and concerned that there remain many dishonest, predatory schools in the for-profit college industry, the senators’ letter asks for specific safeguards, including: that the new aid be used entirely “for student instruction, emergency financial aid to students,and student support services central to the colleges’educational mission”; that for-profit colleges be prohibited from using the new funds for executive compensation, advertising, and recruiting; that publicly-traded for-profit college companies that receive aid be barred from stock repurchases or distributions to shareholders; and that for-profit colleges getting aid be barred from seeking federal stimulus funds from other sources.

The senators also asked DeVos to consider any CARES act money to count toward the 90 percent ceiling on federal aid that for-profit colleges must not exceed — a provision aimed at weeding out schools so weak that no one would spend their own money to go there. A document DeVos released today appears to reject that request as well.

For-profit college owners already have cried foul after advocates and media pointed out that some of the for-profit colleges that might get CARES aid have extensive records of deceiving, overcharging, and abusing students, and of facing law enforcement actions for their misconduct.  The owners say it’s unfair to tar the industry when some for-profit schools do a good job.

But for-profit colleges and their lobbyists fought tooth and nail against Obama administration regulations that would have helped the public differentiate between good and bad schools and help put bad schools out of business — regulations like the gainful employment rule, which had started working to close down or reform weak, overpriced programs that were leaving students with overwhelming debt; and the borrower defense rule, which would help ripped-off students to get their federal loans cancelled and highlight the schools engaged in bad behavior.

So for-profit college owners complaining that they are being tarred by analyses of the CARES act, and by the Warren letter, have themselves to blame. They could have worked with the Department of Education and among themselves to clean up their own industry and drive out the bad actors.  But instead they all identified with the bad actors, and wanted to avoid any accountability.

DeVos and her team also have reversed the Obama administration’s scrutiny of sketchy deals to convert for-profit schools to non-profit status, deals that still allow the former for-profit owners to make big money.  Even had DeVos read the CARES act correctly, the law would allow predatory for-profit schools that have converted, such as Purdue University Global, to get new taxpayer cash.

If her past actions are any guide, DeVos will ignore the senators’ request for new accountability measures to ensure that the CARES relief money goes to students and education, rather than to executive salaries and aggressive, deceptive recruiting efforts, already underway, that will sign up struggling Americans for education programs that will leave them deep in debt and make their financial futures even more bleak. Advocates for students, in and out of Congress, must continue to push to ensure that aid goes to those who need it most, and is not used to further enrich operators of predatory schools.