posted at 9:22 am by David Halperin 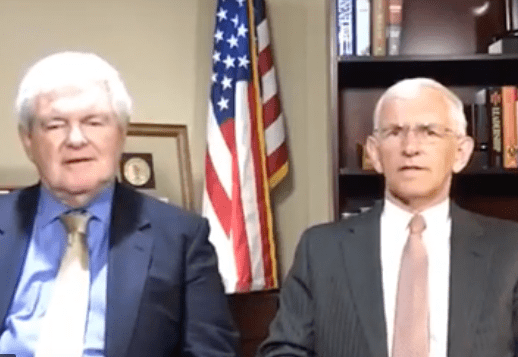 Over three years, the for-profit college industry has gotten almost everything it has wanted from the Trump administration — the cancellation of Obama-era regulations aimed at holding poorly-performing and deceptive colleges accountable, a dramatic scaling-down of enforcement efforts to crack down on fraud and abuse, the deep-freeze or rejection of thousands of claims by ripped-off students to have their federal loans cancelled.

But at the outset of the administration, newly-released documents show, the industry’s chief lobbyist, Steve Gunderson, expressed increasing frustration over not getting something else he clearly wanted badly: a face-to-face meeting with Trump education secretary Betsy DeVos. Gunderson, a Republican former congressman from Wisconsin and now the CEO of the trade group Career Education Colleges and Universities (CECU), made clear to DeVos aides that the for-profit school executives he represented deserved the meeting because they had supported Donald Trump over Hillary Clinton.

The documents also reveal that in the first few months of the Trump administration, Gunderson pressed DeVos to reinstate college accreditor ACICS, which the Obama administration had de-recognized for its blatant failures to prevent predatory for-profit colleges abuses, and to restore federal student grant and loan eligibility to for-profit Globe University, a discredited school whose owners are close Gunderson friends.

On April 12, 2017, two months after DeVos became secretary, Gunderson emailed top DeVos aides Robert Eitel, a former executive at predatory for-profit chain Bridgepoint Education, James Manning, and chief of staff Joshua Venable. Referencing a meeting between the four men the previous day, Gunderson wrote, “yesterday’s meeting was not the appropriate time to share with you the push-back I have received from my members when they learned the Secretary was meeting with the leaders of four higher education associations and not us.” Gunderson noted that his initial request for a meeting with DeVos was sent on February 9, which was less than 48 hours after her confirmation by the Senate.

Gunderson continued with an appeal questioning the political loyalty of other higher education groups: “While I have attempted to explain/defend that decision as a strategic one, all of you can understand the difficulty in explaining how those who opposed the election of President Trump get meetings with the Secretary before the one sector that generally supported his candidacy.” Gunderson expressed the “hope” that he and his members could meet with DeVos “in the near future,” suggesting agenda items should include the Obama borrower defense and gainful employment rules he wanted to eliminate, as well as ACICS. “Somehow, someway,” Gunderson wrote to the DeVos aides, “we must bring some regulatory relief to this sector in ways that put all of higher education on the same equal footing, or we will continue to see more schools close down and more students denied access to the occupational education they so desperately need.”

Gunderson tried, inartfully, to show he appreciated how busy DeVos and her aides were: “No one respects the demands on your schedules, and all the work you are doing.” He confessed, “I feel guilty even sending this request.” But he complained that “the lack of action on any of our major issues is becoming such a significant issue among our membership” that he had to try again to get the DeVos meeting.

Less than two weeks later, April 25, Gunderson wrote again to Manning and Venable, asking DeVos to deliver the keynote speech at the CECU convention, set for June 8 in Las Vegas — if not in person, via Skype. He worried about the impact of “the past eight years,” the tenure of the Obama administration, on his industry: “We’ve lost over 1,000 campuses and our annual enrollments have declined by 1.6 million. This sector is in a state of shock.” But, he added, “The election of Donald Trump has renewed this sector’s sense of hope for the future.”

On May 15, Gunderson emailed DeVos’s new scheduler, Jessica Newman, noting that she had already heard from both Manning and former House Speaker Newt Gingrich, a long-time Gunderson associate and a consultant to CECU, about the invitation for DeVos to speak at the June 8 convention. He stressed, again, “We are the only sector of higher education that supported the President’s election; and the only sector to endorse Secretary DeVos’s confirmation.”

On May 23, Newman responded, declining the invitation “due to scheduling conflicts.”

Gunderson responded a few hours later, saying, “We don’t give up easily,” again seeking a meeting with DeVos “on behalf of Members of our Board of Directors and CECU’s senior leadership,” and again noting that his industry supported Trump’s campaign. Newman immediately pledged to look into the meeting request, but didn’t respond to Gunderson until almost six weeks later, stating, “At this time we are not able to schedule a meeting for you with Secretary DeVos.” She offered a meeting or a phone call with Eitel and another Department official, Kathleen Smith.

If Gunderson responded to Newman, the Department provided no record of it in yesterday’s document release.

In September 2017, Gunderson sent a letter to DeVos, attached to an email to Venable, noting that DeVos had announced a “Rethink School” tour and inviting her to include one of his for-profit college campuses on the itinerary. Venable replied that the “stops for the tour are already set, but we’ll keep this in mind for the future.”

The email traffic suggests that Gunderson was under heavy pressure from the executives who make up his membership to deliver a DeVos meeting. At least through the early months of the Secretary’s tenure, he apparently was unable to make that happen.

The records also indicate that in the first weeks of DeVos’s tenure, CECU was aiming to get the Department to reinstate ACICS, the asleep-at-the-switch accreditor of predatory school chains including Corinthian Colleges and ITT Tech. ACICS had sued the Department to get its termination overturned. Gunderson’s top aide, Michael Dakduk, warned Eitel and Manning about “the inability of other national accreditors to handle the 690 campuses” accredited by ACICS. These for-profit schools needed an accreditor recognized by the Department in order to remain eligible for the federal student grants and loans that provided the bulk of their revenue. Gunderson, on April 4, wrote to Eitel, asking the DeVos aide “to help us get the Out-of-court settlement for ACICS resolved.” He added, “We would ideally like a reversal of the decisions” made under Obama.

In 2018, DeVos reinstated ACICS, giving Gunderson what he sought. But the discredited accreditor is still struggling to do an adequate job.

Gunderson’s April 12, 2017, email to the DeVos aides, where he pushed hard for a meeting with DeVos, also referenced his continuing concern about Minnesota-based Globe University, which he apparently had discussed at an in-person meeting with the aides the day before. Gunderson wrote that the Obama administration’s decision to cut off aid to Globe “represents one of the most blatant political/ideological decisions I’ve seen by any administration in all my years in government.” He added, “My hope is that you take the appropriate actions to provide some level of justice to the incredible work” of the family that owned Globe.

In fact, the Obama education department’s suspension of Globe was hardly “political.” It came after a Minnesota court ruled in 2016 that Globe had engaged in consumer fraud and deceptive trade practices by misleading recruits to its criminal justice program about the job opportunities they would have, and after Minnesota’s higher education agency moved to shut down the school.

Gunderson is a long-time friend of the Myhre family, owners of Globe.

In August 2019, the DeVos Department took action to keep some of the Myhre’s schools, based in Wisconsin, eligible for federal aid, reversing a separate Obama-era decision.

There are no emails in the 44-page file released by the Department in which DeVos aides actually discuss substantive issues; their messages mostly cover logistics. It appears these Department officials prefer to express their views by phone. At one point in the email chain regarding ACICS, Eitel writes to Dakduk, “Mike, Do you have time for a quick chat? Bob.”

In June 2017, Gunderson forwarded to the DeVos aides, without endorsement, emailed concerns, “circulated among Republican friends,” expressed by a man named Dave Beck about a new DeVos appointee, Wayne  Johnson. The substance of the concerns is completely redacted in the email as released by the Department, except that one person in the email chain wrote, “If Dave says this guy is bad, then the guy is bad.” Johnson, who held a couple of key student aid jobs under DeVos, resigned in October 2019, declaring that he believed there are “fundamental flaws” in the student loan system and announcing a long-shot bid for a U.S. Senate seat in Georgia. Gunderson himself told the DeVos aides in the June 2017 email that he had no reason to oppose Johnson.

Public Citizen submitted its request for documents in September 2017. (I have served for many years on Public Citizen’s board of directors but was not aware of this FOIA request until yesterday, when Public Citizen staff offered the documents to me.) When the Department finally provided a response this week, the documents covered only the period through September 2017, even though no doubt there have been more communications between CECU and the Department since. This kind of delayed, weak response is pretty typical for FOIA requests, especially under the willfully-resistant Trump administration, but it’s extremely disappointing in terms of fulfilling the law’s goal of public access to the workings of government.