John Roberts May Save Our Democracy from Trump

posted at 1:39 pm by David Halperin 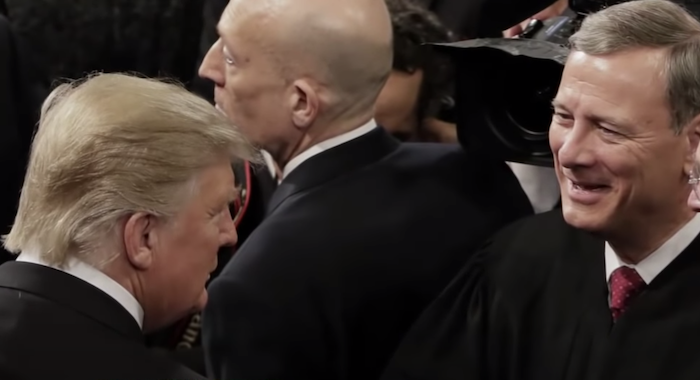 Since November 2016, I have expressed concern that Donald Trump, if he loses re-election, will claim the ballot was rigged and refuse to leave. My worries escalated in February 2019 when lawyer Michael Cohen, who worked closely with Trump for years, explained that the very reason he agreed to testify to Congress was to warn of this danger; “I fear,” Cohen said, “that if he loses the election in 2020 that there will never be a peaceful transition of power.” Now, with polls showing Joe Biden with a consistent lead, and with Trump growing increasingly bitter and erratic, the risk seems even greater. It’s being widely discussed in public, including by Biden, and some outside experts are preparing for the possibility.

While a dug-in Trump would surely use Twitter and the White House podium to rile up his base and threaten the public with boasts about the physical might at his disposal, as he has done recently, seeking to scare anti-racism protestors with threats of “the most vicious dogs, and most ominous weapons,” he surely, as he always has, would also pursue legal maneuvers to get his way.

That approach, ultimately, may prove to be more potent than physical force. While ragtag armies of MAGA enthusiast white supremacists might cause some violence and destruction in support of Trump’s intransigence, I believe in the end our military commanders and federal law enforcement agency leaders, tired of Trump’s lawless antics and insults, would, if necessary, stand up to Trump and push him out.

But I wouldn’t expect such fidelity to democracy from two of the most powerful figures in the Trump administration, disgraceful lawless lawyer-henchmen Bill Barr and Mike Pompeo, who occupy the Attorney General and Secretary of State jobs, each critical roles if our democracy gets tested by a Trump refusal to vacate the White House. Barr and Pompeo each have demonstrated that they will bend rules, violate norms, tell falsehoods, and throw subordinates to the wolves in order to do Trump’s bidding and keep their powerful posts.

Barr’s Justice Department, in cases regarding Trump’s presidential powers, disclosure of Trump’s taxes, the ability of citizens to pursue personal lawsuits against Trump, and much more, has been willing to take positions that trash established legal precedents in the name of broad power and immunity for the president. Barr also has undermined prosecutions of Trump cronies like Michael Flynn and Roger Stone and weaponized the Department to pursue former law enforcement and intelligence officials who investigated the Trump campaign.

If they sought to contest the election result in court, Trump and Barr would surely craft their lawless coup as a straightforward, legitimate legal grievance that the vote was fraudulent. That approach would be harder for our system to dismiss outright than a blatant, violent coup.

Trump has been laying the groundwork for such a legal challenge for years, with claims that the Democrats rig voting throughout the 2016 campaign and through his entire term. Trump has revved up these baseless claims during the pandemic, with a focus on attacking vote-by-mail efforts.

The most important battlefield, then, may be the courts. That’s where the presidential election of 2000 was ultimately settled, with Republican George W. Bush the victor over Al Gore by a 5-4 vote of the U.S. Supreme Court. In that case, the five most conservative justices, all appointed by Republican presidents, voted in favor of Bush, while other four, two appointed by Republicans and two by Democrats, went with Gore.

Now the Court is comprised of four justices picked by Democrats and five justices picked by Republicans, two of those selected by Trump himself and all five of them generally reliable conservative votes. The four Democratic picks are unlikely to be unswayed by wholly lawless Trump-Barr court challenges to the election. As to the five Republican-chosen justices, I hope all of whom would stand up for our Constitution and our democracy in the face of such meritless attacks. But I just don’t know. Some could see shades of grey, enough shades to keep Trump in power, and turn our democracy into a sham.

Increasingly, though, I think there is a decent chance that at least one of the five would squarely reject bad faith claims by Trump that he should remain in power despite the will of the voters: Chief Justice John Roberts. It seems increasingly clear from his opinions, and his body language, that Roberts has had enough of Trump’s extraconstitutional nonsense.

Roberts has progressed from his early days as a somewhat contemptuous young right-wing Reagan White House lawyer. In 2012, he provided the critical 5th vote to save Obamacare. He publicly rebuked the president in 2018 for calling a judge who had ruled against Trump’s asylum policy “an Obama judge.” While some Trump foes wanted Roberts to add his vote to the tally of Democrats demanding witnesses in the Senate impeachment trial, few Roberts watchers were surprised when the Chief Justice declined to do that. But while such voting in the Senate would have stretched the Chief Justice’s view of his constitutional role, voting in a civil case brought by Trump to upend the election clearly would not.

Roberts’ willingness to put Trump in his place was further suggested twice this week, when he (1) voted with the Supreme Court’s 6-3 majority to reject the Trump administration’s position and hold that federal anti-discrimination laws protect LGBTQ people; and (2) wrote the 5-4 decision rejecting the Trump administration’s attempt at a rule to cancel the DACA protections for undocumented young Dreamer immigrants. In those cases, frankly, the unimpressive, confused body of legal precedents governing, respectively, interpretation of statutes and review of administrative regulations would have allowed a sincere judge to vote either way.  But in each case, Roberts stood resolutely on the side of oppressed individuals seeking justice, and against the position of Donald J. Trump.

Trump reacted by engaging in precisely the kinds of attacks on the judiciary that seemed to push Roberts’ buttons in the past — claiming that the decisions were “politically charged” and demanded a Republican victory in November. I’m not saying these continuing Trump offenses will influence in any way the future votes of John Roberts, who has always stressed the importance of judicial impartiality. But I think if Trump contested the election, Chief Justice Roberts, unlike Bill Barr and Mike Pompeo, would interpret the law fairly, the law would disfavor Trump, and Trump would lose and be gone.