The 30 Most Disgraceful People of the Trump Administration, So Far

posted at 8:21 am by David Halperin 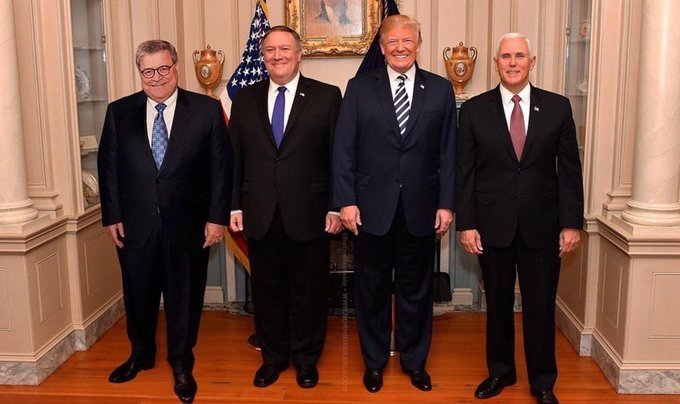 On Monday we will be three full years into the Donald Trump presidency, a period marked by relentless corruption of our democracy to benefit wealthy special interests, as well as to soothe Trump’s own vanity and vindictiveness. Until late 2018, Republic Report published a weekly “Trump Terrible 10,” counting down the ten most disgraceful people in Trump World. Now, post impeachment, post threats to four embassies, post 409ks, we’re back to count down the 30 worst people over this entire train wreck of an administration, at least so far.

We have included, in addition to administration officials, the top congressional enablers. For now we’ll mostly stay away from all the awful outside allies and toadies, from Sean Hannity to Kanye West, Jerry Falwell Jr. to James O’Keefe, Bob Murray to Vladimir Putin to Diamond and Silk. We’ll focus on the people Americans are actually paying to destroy the country and the planet.

Ace stock trader who tried to kill Obamacare before being forced to resign over private jet abuse.

Separated children from parents, put people in cages, and told lies in her vain attempt to suck up to Trump and stay in power.

Passive-aggressive manager who constantly tried to shift blame away from himself. Faced with the aggrieved widow of La David Johnson, a U.S. Army sergeant slain in Africa, Kelly revealed himself to be an old-time Boston bigot.

27. Steven Mnuchin, Secretary of the Treasury.

He and the wife obviously got good advice on tamping down their Mr. and Mrs. Moneybags image, but he stood by when Trump praised the Charlottesville White Supremacists, hides Trump’s tax returns, and endlessly pushes policies that favor big corporations and banks over working people.

Pulls away the football from America every time, and delivers it to her President.

No press briefings, just Fox News appearances and nasty attacks on anyone who would question the man who gave her a job for which she’s clearly unqualified.

Lies and runs corrupt secret missions for Trump; sues people who make fun of him.

Covers up effort to abuse the Census to aid the GOP, engages in troubling stock trading, falls asleep in meetings.

Spent the campaign and transition engaging in shady dealings with Russians. Ethics disclosure forms were an ethics disaster. In office, has way too many  jobs; does them poorly. Cozies up to MBS.

Reportedly called herself “the First Daughter”; all her grotesqueries, including taking Daddy’s chair at a global meeting, flow from that.

Turned the White House press briefing into a torrent of unpleasantness and falsehoods.

Embodies the transformation of the executive branch and Republican Party into a personality cult, with her sycophantic praise of the Orange Leader.

Lets Trump be Trump. You don’t like that someone as morally empty as Mulvaney occupies that chair? Get over it.

DeVos has undermined our public schools and trashed civil rights. She suggests that college students are scam artists, while aiding and abetting the actual scam artists who run predatory for-profit colleges.

Each man succeeded a blatant grifter (see 9 and 8 below), but each is an even more pernicious Washington creature: the skilled, ruthless revolving door careerist, who rises from a congressional errand boy into a cabinet official relentlessly serving the interests of destructive industries.

Each man thought he was a prince, turning his agency into a vanity project, grabbing all possible perqs, banishing dissenters, sucking up to Trump, and planning to succeed him in the Oval Office, all the while trashing the environment and the global climate.

7. Rudy Giuliani, outside counsel to the President.

Are you endangering national security and democracy with your efforts to advance Trump’s political goals by corrupting officials overseas, while side-hustling consulting work in the same countries?  No! Seriously, are you?  Of course I am!

Sanctimonious moralist who lies for a living, defending a crooked boss.

Graham needed a big cool friend after John McCain died, so he became a snarling Trump sycophant — brave Kavanaugh accusers, the Constitution, and the truth be damned.

He’s supposed to be America’s chief diplomat, but, to advance his dreams of being the next #MAGA president, Pompeo has pursued Trump’s corrupt political goals, while acting in public as his smirking, nasty, deceitful hatchet man. As a side job, he’s undermining U.S. security by pursuing an apocalyptic vision of war against Islam.

[UPDATE 01-24-20: Pompeo threatens to move up in the rankings, and further threatens (except there’s nowhere to go).]

An angry bag of sharp right-wing grievances in the soft body of a rich DC corporate lawyer, Barr has corrupted the integrity and indeed the purpose of the Justice Department, turning it into a blunt instrument for Trump’s personal coverups and vendettas.

McConnell ruthlessly sweeps all Trump’s corruption, crimes, and ugliness under the rug in order to deliver what donors to his pay-to-play party want most: tax cuts for the rich, right-wing judges, and relentless deregulation of fossil fuel, banking, and other industries.

He got the US government to announce that the G-7 summit would be held at a starved-for-business, sweltering Florida resort he owns. That’s just one of 1000 disgusting things he’s said and done.

Shameless liar and con man, ugly racist and misogynist, despicable attacker of the free press and whistleblowers, admirer of autocrats, erratic and ignorant incompetent, pathetic narcissist, enabler of global climate disaster, and corrupt, kleptocratic abuser of the Constitution, Trump is the most vile and disgraceful person in Trump World.

Let’s hope his reign of odiousness ends within the next twelve months.