Cohen: I Fear Trump Won’t Leave If He Loses Election

posted at 5:39 pm by David Halperin 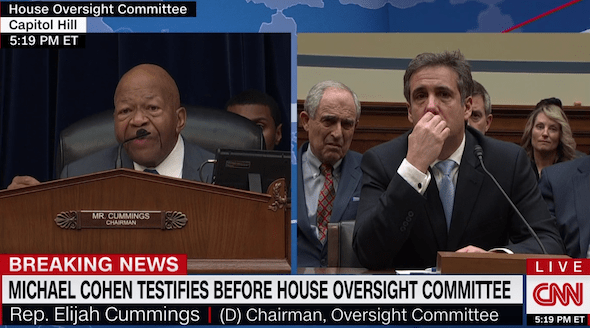 Michael Cohen chose to conclude his dramatic Capitol Hill testimony today with a pointed warning about President Trump. “I fear,” Cohen said, “that if he loses the election in 2020 that there will never be a peaceful transition of power.” In other words, Cohen raised the concern that Trump would refuse to leave the White House despite an electoral victory by his opponent. “And this,” Cohen added, “is why I agreed to appear before you today.”

I’ve worried about this contingency since Trump was elected. During the 2016 campaign, Trump repeatedly charged that the presidential election was rigged against him, and that if he lost it would be due to voter fraud by the Democrats. There was concern at the time that if Hillary Clinton claimed victory, Trump would contest the outcome and mobilize his supporters to do the same.  But Trump won the election, so he was left with nothing to contest.

In 2020, if an opponent does rise to the challenge and defeats Trump, the concerns will be magnified, because Trump would be poised to contest the outcome from inside the White House, with a sense of entitlement, and with access to the levers of power. Trump has demonstrated again and again, from his complaints about and attempts to influence law enforcement investigations (Russia/Mueller, Duncan Hunter and Chris Collins, AT&T/Time-Warner merger, and, of course, Hillary Clinton), to his unilateral announcements of a new branch of the military, military pullouts, and military parades, that he thinks that the arms of our democracy should be at his personal disposal.

If Trump resists leaving, it will be up to the Congress, the states, and the public to stand up for our democracy. But it may also require steely resolve by some key national security and law enforcement leaders, such as the Secretary of Defense, the chairman of the Joint Chiefs of Staff, the Attorney General, the director of the FBI, and the director of the Secret Service. Trump’s dismissal from office of semi-independent officials like James Mattis and Jeff Sessions has increased the dangers.

If it sounds far-fetched that a threat to stay in power might gain some traction, consider all the times that congressional Republicans have accepted Trump’s corrupt and extra-constitutional actions: the Muslim ban, the firing of James Comey, the foreign spending at the Trump hotel, the endorsing of Putin’s views over those of U.S. intelligence leaders, now the phony Wall emergency. Many in the MAGA crowd will be happy to join a mob protecting their leader.

The peaceful transition of power is a critical hallmark of our system, shielding us from the upheaval and violence often faced by numerous nations around the world. Donald Trump, who has repeatedly demonstrated disregard for our constitutional values, poses a unique threat to this stability. Cohen, who worked closely with Trump for a decade, knows who we’re dealing with. Again, Cohen said his concern that Trump won’t leave was the reason he agreed to testify.

I urge the quiet creation, right now, of a bipartisan project focused on sustaining our democracy in the event Trump refuses to accept an electoral defeat.