posted at 6:49 pm by David Halperin 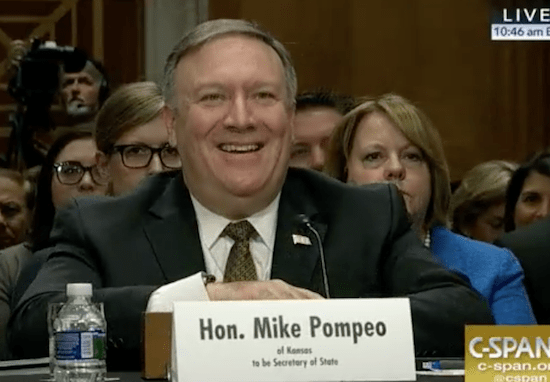 Secretary of State Mike Pompeo is stonewalling, using contrived excuses to delay House investigators from questioning State Department officials who have information relevant to the Trump impeachment inquiry. He’s also been concealing his own involvement: It emerged last night that Pompeo actually listened live to the fated call between Donald Trump and Ukraine president Volodymyr Zelensky, a fact you would not have suspected if you listened to Pompeo’s previous comments on the matter, where he huffed that he hadn’t had time to read the whistleblower’s 7-page complaint because he’s so busy.

Pompeo’s performance since the Ukraine scandal hit is of a piece with his ugly, dishonest career, one marked by sucking up hard to patrons to fuel a rise that has taken him to the center of global power.

Pompeo was hand-picked by Koch Industries to represent the company’s Kansas district in the House, and he won a close race backed by Koch cash. In office, he delivered, fighting to block measures to protect against chemical plant disasters and to curb global warming — issues where the Kochs have spent heavily to stop reforms and pad their bottom line.

Named to be Trump’s CIA director, Pompeo licked the the president’s boots every chance he got. In January 2018, for example, Pompeo pushed back on reporting that Trump was not engaged, telling an audience, “I have seen 25-year intelligence professional receive briefings. I would tell you that President Trump is the kind of recipient of our information at the same level that they are.” Trump, gushed Pompeo, “has the grounding for him to be able to grasp this information in a way that he can ask sophisticated questions that then lead to important policy discussions.” Totally.

Just a few months later, Pompeo had pushed aside the less pleasing Rex Tillerson to take the State job.  Once ensconced at State, Pompeo acted less like a diplomat and more like a partisan political surrogate for the president, handling his appearances on the Capitol Hill as a sneering, surly hatchet man, treating members’ legitimate questions about Trump’s dealings with Vladimir Putin, and other critical topics, with utter contempt.

Meanwhile, Pompeo’s slavishness toward Trump somehow deepened even more, leading to the notorious comments from former officials in a New Yorker profile that Pompeo is “among the most sycophantic and obsequious people around Trump” and “a heat-seeking missile for Trump’s ass.”

Now we know that Pompeo listened as Trump tried to leverage taxpayer-supported, Congress-appropriated national security aid to get Ukraine’s president to seek dirt on Joe Biden — and apparently did nothing but go with the plan, as the record of the call was improperly hidden on a code word classified server, as State Department officials were dispatched to Ukraine and discussed Trump’s demands. And now, with State employees’ actions and observations at issue, Pompeo is leading the Trump effort to obfuscate and stonewall.

Frankly, the House doesn’t need to wait for a prolonged court fight with Pompeo and others in the administration to move ahead with an article of impeachment over the Ukraine matter. The smoking gun transcription of the call, provided by Trump over Pompeo’s objection, is all they really need.

Pompeo may hang on to this job for the next year and a quarter. He may.  But the taint of his association with this corrupt, ugly con man of a president, and with the Trump team’s scandalously corrupt assault on our democracy and foreign policy, won’t go away. He’s not going to get what he’s really after. Unless the country turns even uglier and dumber, he’s never gonna be president now.