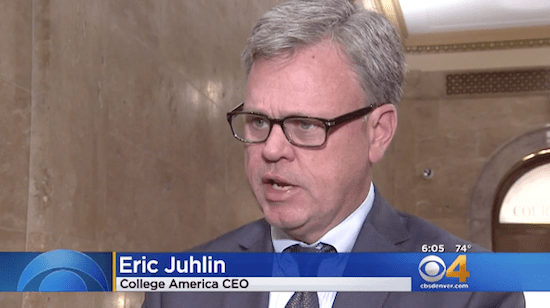 Eric Juhlin, the CEO of the Center for Excellence in Higher Education, has emailed his employees declaring a Colorado judge’s recent $3 million fraud verdict against the company and its schools a “political” decision and pledging to file an appeal. Juhlin followed up with a message instructing employees to tell students that the judge’s ruling was “unfair” and that the company believes it will be reversed on appeal. Juhlin also emphatically warned employees not to speak with the media.

On August 21, almost three years after Colorado’s attorney general brought CEHE and two of its career training schools, CollegeAmerica and Stevens-Henager, to trial on charges of defrauding students, Colorado state district judge Ross B.H. Buchanan issued an opinion finding the schools guilty of violating the state’s Consumer Protection Act and ordering a $3 million penalty. The court also found Juhlin and Carl Barney, the founder of the schools, personally liable for the misconduct.

On August 25, Juhlin sent an email to staff:

I’m saddened to report that last Friday the judge issued a very unfavorable verdict against CollegeAmerica from the trial with the Colorado Attorney General’s office. In short, after waiting almost three years after the trial ended, the judge ruled in favor of the Colorado Attorney General’s claims on all issues. This was not the result we had expected or hoped for in this case. Frankly, I am disgusted by the judge’s decision. I believe that a strong argument could be made that this was nothing more than a “political” decision rather than one based upon a thoughtful and careful examination of the facts presented in this case.

Regardless, while CollegeAmerica lost this battle, we will continue fighting for the “truth” and will be filling a comprehensive appeal with the Colorado Court of Appeals. I remain confident that most, if not all, of this decision will be overturned or modified by the Court of Appeals.

Juhlin did not mention in his email to employees the size of the verdict, or recount the considerable evidence of fraud that the judge described, or explain why he thought a judge would have a “political” agenda against the company (or indicate why he thinks the words “political” and “truth” need air quotes). But Juhlin assured employees that the decision would not prevent the company from operating or appealing:

The good news, from a financial perspective, is that the decision will not have a significant or material impact upon CEHE’s current financial position. While it is unfortunate that we will have incur [sic] additional legal fees to pursue our appeal, CEHE is in a very strong position financially and has the resources to pursue a just, fair, and right outcome.

If you are contacted by the media, or someone who you think might be with the media, you should always adhere to IL 290 – Press Contact Policy (copy attached).

Response to questions from current or former students about the CollegeAmerica Colorado decision:

The “Press Contact Policy” attached to the second Juhlin email is dated 2014, and it explains that CEHE’s policy is “without exception, no employee may speak with a member of the press or other media channel on matters regarding CEHE, our colleges, our programs, our employees, or our students without prior approval from the Chief Executive Officer.” The document then warns, “Failure to abide by this policy may result in disciplinary action.”

Unfortunately, the press and/or other media representatives will often try to directly contact one of our colleges or CEHE employees. Upon reaching a CEHE employee, the reporter or media person, who may not identify him/herself as a member of the media, will ask questions or attempt to gather information/comments about CEHE, our colleges, our programs, our employees, or our students.

The guidance document then emphatically repeats the same directions:

Juhlin’s comment to staff in his latest email that “there has been little to no media coverage of” the Colorado judge’s decision is fair, I guess. As far as I know only Republic Report, reporting the same morning that Judge Buchanan issued his opinion, has covered the ruling. It’s remarkable that national, Colorado, and education industry outlets haven’t reported on Judge Buchanan’s sharp conclusions about CEHE’s misconduct and the resounding victory earned by the state of Colorado, on behalf of its citizens, against a predatory school that has received hundreds of millions in taxpayer dollars over the years and left many students in financial ruin.

Judge Buchanan’s 160-page decision and order meticulously documents how the CEHE schools used a detailed playbook to manipulate vulnerable students into enrolling in high-priced, low-quality programs; how the school directed admissions representatives to “enroll every student,” regardless of whether the student would likely graduate; how the schools’ recruiters and advertisements greatly overstated starting salaries that graduates could earn; how the schools falsely inflated graduation rates; and how students suffered as a result.

Battered by federal and state law enforcement actions, and disciplinary measures imposed by accreditor ACCSC and Colorado’s state higher education agency, CEHE is in the process of shutting down almost all of its CollegeAmerica and Stevens-Henager ground campuses. It has shifted almost all its recruiting and programs to its entirely on-line, heavily advertised Independence University. But that school continues bringing in thousands of new students and millions in taxpayer dollars.

The CEHE schools converted from for-profit to non-profit in 2012, but in 2016 the Obama-era Department of Education rejected the schools’ application to be granted favorable non-profit status for purposes of Department regulations; the Department concluded that the schools’ operations and finances were still structured to primarily benefit former owner Carl Barney’s bank account, rather than the welfare of students. Juhlin attacked that decision, like Judge Buchanan’s, as “political.” In 2018, the Trump-Betsy DeVos education department secretly reversed the 2016 decision. Before she became DeVos’s top higher education aide in 2018, former for-profit college executive Diane Auer Jones was hired by CEHE for $50,000 to serve in 2017 as their expert witness in the Colorado lawsuit. Judge Buchanan wrote that he “did not find… persuasive” Jones’s testimony.