College Rebuked Today By Education Dept. Is Suing Ex-Employee Who Complained to Accreditor

posted at 2:21 pm by David Halperin

As we reported this morning, the U.S. Department of Education today rejected the request of the CollegeAmerica/Stevens-Henager college chain to have its status changed from for-profit to non-profit for purposes of federal financial aid rules. The Department concluded that the chain’s conversion to non-profit status appeared primarily to benefit the for-profit chain’s owner, Carl Barney, rather than students. The chain has responded by calling the decision “wrong and derived solely from this administration’s political agenda against private colleges.”

Republic Report has been covering this predatory college chain, and questioning the terms of its conversion to non-profit status, since 2013. The chain is now facing major fraud lawsuits pursued by the U.S. Justice Department and the state of Colorado for allegedly violating recruiting rules and deceiving students. But despite all the research and reporting about this college chain in recent years, there is more to learn.

CollegeAmerica/Stevens-Henager has sued a former employee, Debbi Potts, of Fort Collins, Colorado, claiming that the chain is entitled to the return of $7000 because Potts breached a severance agreement with the company under which Potts “specifically agreed to not disparage the reputation of” the college chain.

The agreement between CollegeAmerica and Potts also contained a remarkable provision prohibiting Potts “from personally (or through the use of any third party) contacting any governmental or regulatory agency with the purpose of filing any complaint or grievance that shall bring harm to CollegeAmerica, Denver Inc. and any of its related companies.”

In the amended complaint filed in the case in 2014, CollegeAmerica/Stevens-Henager asserts that Potts violated the agreement “when she published written statements to a former employee” of the chain and “also violated the contract by filing a complaint with the ACCSC.”

The ACCSC is the accrediting agency for CollegeAmerica/Stevens-Henager schools. (Earlier this year, the chain was seeking to move to a different accreditor, ACICS, but that accreditor is now at risk of losing its recognition from the Department of Education.)

In February 2013, Potts, who had been the campus director of CollegeAmerica’s Cheyenne, Wyoming, campus until she resigned in 2012, reported to ACCSC multiple alleged violations by the school — explosive allegations that are detailed below.

Potts had also filed a federal age discrimination claim, joined by the U.S. Equal Employment Opportunity Commission (EEOC).  The EEOC charged that CollegeAmerica illegally retaliated against Potts by filing its lawsuit seven days after learning she filed the discrimination charge. In June, after a three day trial, a Colorado federal jury rejected the EEOC’s claims. Eric Juhlin, CEO of the nonprofit Center for Excellence in Higher Education (CEHE), which owns the CollegeAmerica and Stevens-Henager schools, said, “EEOC’s decision to bring this lawsuit was a travesty and blatant abuse of its authority… This was a huge waste of taxpayer money, abusive litigation by the EEOC, and an example of the EEOC’s obvious bias against employers.”

Last month, Potts sent the next volley in the dispute, filing a lawsuit in federal court in Denver against CollegeAmerica/Stevens-Henager, asserting that the chain fraudulently received hundreds of millions of dollars in federal aid and directed her to lie in financial aid reports to the Education Department. The suit also claims that the chain illegally retaliated against Potts by suing her for complaining to their accreditor. (In testimony in the EEOC case, Eric Juhlin appeared to acknowledge that a provision barring a former employee from complaining to a government or accrediting authority was illegal.)

The new federal lawsuit details the allegations Potts that made about CollegeAmerica to the accreditor, ACCSC, in her 2013 complaint: 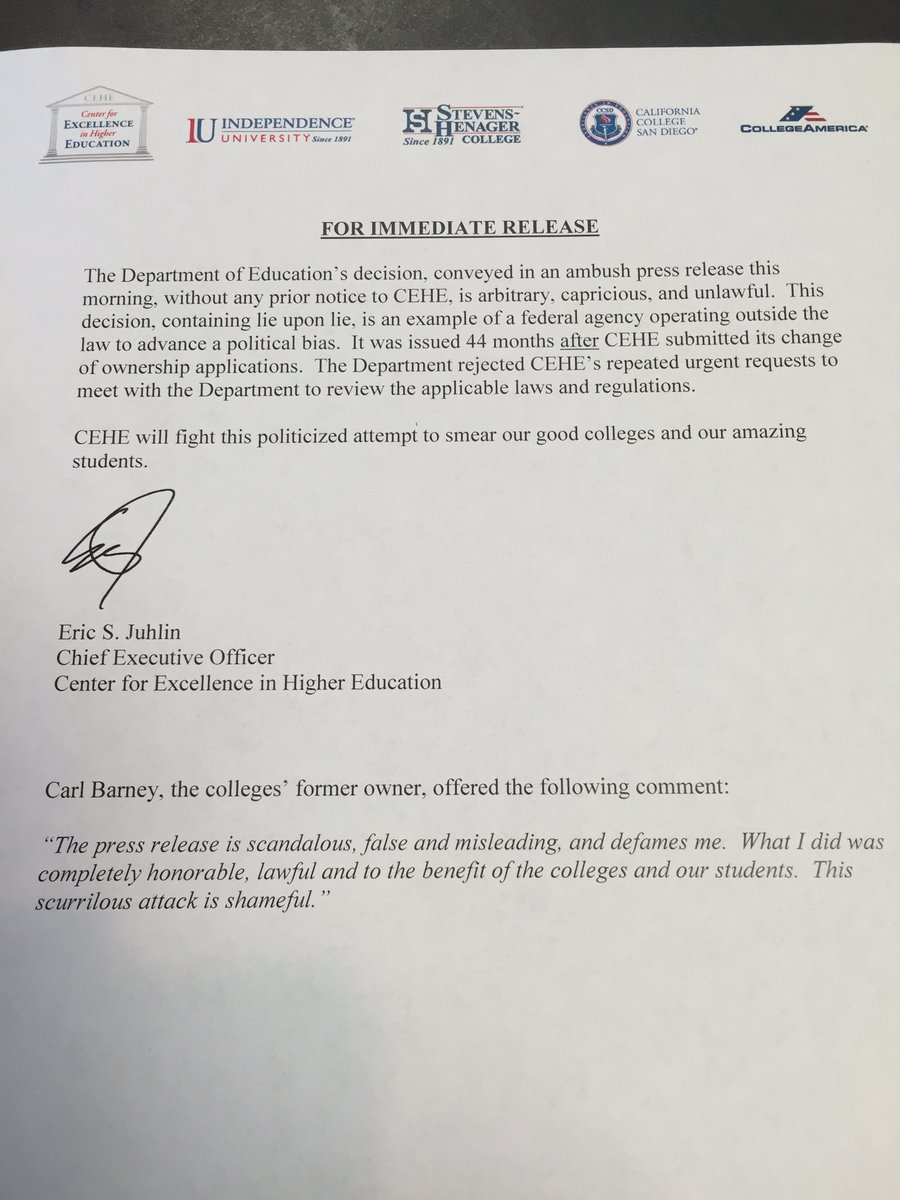