Why Is Delta Air Lines Steering Its Employees to Predatory Ashford University?

posted at 7:41 am by David Halperin 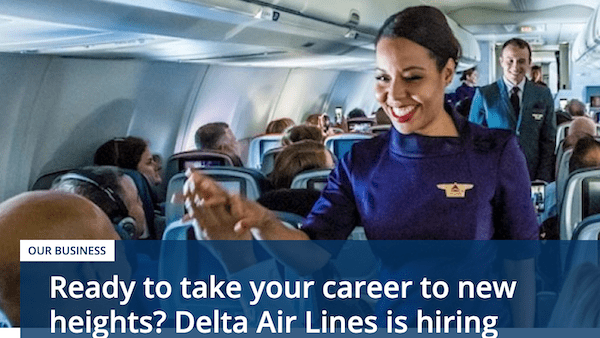 For-profit education provider Zovio recently announced it has partnered with Delta Air Lines in a deal that “allows eligible Delta employees to pursue associate, bachelor’s and master’s degrees at Ashford University at a discounted rate.”  Sounds generous. Except that Ashford University, which is tied to Zovio, has a long record of deceiving, overcharging, and abusing students, while taking in billions in student grants and loans paid for by U.S. taxpayers.

After conducting a hearing on the school in 2011, then-Senator Tom Harkin (D-IA) declared Ashford “a scam, an absolute scam.” The school has since been sued and investigated by multiple federal and state law enforcement agencies for deceptive and fraudulent behavior that has left many former students with crushing loan burdens.

Why would Delta steer its flight attendants, mechanics, gate agents, and others to such a predatory institution?

Zovio is the new name for Bridgepoint Education, the company that has long operated Ashford University, but it recently spun off the school as a separate non-profit entity — a questionable transaction facilitated by Trump education secretary Betsy DeVos’s total abandonment of accountability for for-profit schools. One of DeVos’s top higher education aides, Robert Eitel, was previously a senior executive at Bridgepoint.

As we reported in 2016, major employers, from Walmart to American Airlines, McDonald’s to Cirque de Soleil to even the FBI, have included, as supposed employee benefits, access to programs at for-profit colleges with extensive records of abuses and law enforcement probes — the University of Phoenix, DeVry, Kaplan, American Intercontinental University, Ashford. Sometimes these employers throw a non-profit college or two into the mix, but for-profits dominate the offerings.

It’s not clear why so many big employers direct their workers to predatory schools that could ruin these employees’ financial futures. Perhaps it’s just the easiest way for lazy HR managers to check the box of providing education benefits, because for-profit schools aggressively push their programs and most other schools don’t bother. Perhaps — although I have no proof– the for-profit schools shower HR staff with trinkets, junkets, or other soft or hard bribes. Or maybe — though, again, I haven’t seen any proof — some for-profit schools pay companies finder fees for steering employees to the schools, something that would be a severe breach of trust by the employers.

One company, Adtalem, told me back in 2016 that its DeVry University did not pay employers to be included in their benefit offerings. (Adtalem has since sold DeVry to another institution.) Many other schools and companies declined to comment.

For Delta, which this month did not respond to my request for comment, to enter into a new partnership with Ashford now seems an egregious abuse of its responsibilities to its employees. Because the record is clear that Ashford has engaged in predatory abuses and left many students worse off than when they started.

In March 2011, then-Senate HELP committee chairman Harkin held a hearing focusing on Ashford and Bridgepoint. Harkin presented a series of charts showing that the company had seen rapid growth, with revenues increasing from $33 million in 2008 to $216 million in 2010, while experiencing mounting student loan default rates. Harkin said Bridgepoint was “a scam, an absolute scam … premised on aggressively recruiting largely low-income, disadvantaged students … collecting their federal grants and loans even as the vast majority of students drop out … and lavishly rewarding executives and shareholders with mostly taxpayer dollars.”  He concluded, “From a strictly business perspective, this is a highly successful model. But, I must say, from an educational perspective — and, frankly, from an ethical perspective — it is deeply disturbing model.”

Senator Harkin’s 2012 report on the for-profit college industry found that Bridgepoint taught its recruiters “a sales technique known as ‘overcoming objections.’ If a student presented an ‘objection’ to enrolling, recruiters were instructed to think of this as a ‘buying signal’ that tells the recruiter ‘the student is still paying attention and the “sale” is still alive!’ If a student objected that the cost of attending is too high, the recruiter was taught to respond with questions such as, ‘Investing in yourself . . . You’re worth it right?,’ and ‘how much more will you make once you have your degree?,’ and by discussing how ‘financing options [are] available for those who qualify.’ If a student raised the ‘credibility/reputation’ of Ashford, recruiters were taught to recite promotional statements about how the college was ‘established in 1918,’ discuss the ‘traditional 4-year campus with sports teams, dormitories,’ and how the college has been ‘regionally accredited since 1950.’ In fact, Ashford University … is an entirely different institution than the small religious college that Bridgepoint purchased in 2005. Ninety-nine percent of students do not attend the small Iowa 4-year campus.”

The Harkin report contains accounts by students who contend they were misled by Bridgepoint recruiters, including a veteran who was told his GI bill benefits would cover the entire cost of his degree, only to find out after he was enrolled that he would owe approximately $11,000 out-of-pocket; and a student told that his program would allow him to become a licensed dental assistant only to find that claim was false.

The Harkin report also found that Bridgepoint spent 29.7 percent of its revenue — $211.6 million — on marketing and recruiting, a higher proportion of its than any other publicly traded education company, and more than twice what the company spent on teaching students.

Bridgepoint Education has since been under investigation for fraud and other abuses by five state attorneys general.

In May 2014, Bridgepoint agreed to pay $7.25 million to settle claims by Iowa Attorney General Tom Miller that the company violated Iowa’s Consumer Fraud Act. Miller said at time, “Our investigation found what we allege was troubling conduct by Ashford recruiters, including misleading prospective students to encourage them to sign on the dotted line. Unfortunately for many Ashford students, they didn’t get the degree they hoped for or the job they were led to believe they’d get after graduating. What they did end up with was a crushing amount of student loan debt.”

Miller alleged “unconscionable sales practices through which Ashford telemarketers, under significant pressure to enroll students,” violated the law.  These included: making false or misleading statements to prospective students in order to convince them to enroll; utilizing unfair and high-pressure sales tactics, including emotionally-charged appeals to persuade prospective students to make uninformed decisions to enroll; misrepresenting to prospective students who wished to become teachers that an online Ashford education degree would allow them to become classroom teachers when, in fact, many Ashford graduates are subject to additional requirements that may require additional time, coursework, or money. Bridgepoint denied the charges.

In 2017, California’s attorney general sued Bridgepoint, alleging unfair and fraudulent business practices at Ashford. The lawsuit claims Ashford’s recruiters were fueled by a “boiler room” culture that demanded they meet enrollment quotas. The recruiters, in turn, allegedly told prospective students, falsely, that federal financial aid would cover all of their costs. Ashford denies the charges; the case is still pending.

In 2016 Bridgepoint disclosed that the U.S. Justice Department had served the company with a civil investigation demand aimed at determining whether it misrepresented its revenue from private student loans and thus its compliance with the federal 90/10 rule, which requires for-profit colleges to get at least 10 percent of their revenue from sources other than the U.S. Department of Education.

Bridgepoint also has been under investigation in recent years by the Securities and Exchange Commission and the Consumer Financial Protection Bureau.

But while some other giant for-profit college corporations — Corinthian, ITT Tech, EDMC — have collapsed, Bridgepoint, now rebranded Zovio, has carried on, with Ashford receiving $367 million in taxpayer-funded Department of Education aid, and $452 million in total revenue, during 2016-17 (and Bridgepoint’s other school, University of the Rockies, getting another $15 million in federal aid).

Last November Ashford’s accreditor, WASC Senior College and University Commission, put on hold the school’s application to be recognized as converting from a for-profit to a non-profit. Bridgepoint had announced in March 2018 that it planned to turn Ashford into a non-profit school, while still maintaining a for-profit business that would make money servicing the non-profit. The proposed conversion to non-profit status is part of a wave of similar actions by for-profit college companies seeking to escape the stigma and government scrutiny that their own bad behavior created, and avoid regulations like the 90-10 rule, while continuing to make big money off low-quality education programs. Last month, Ashford announced that WASC had approved the conversion.

Ashford, headquartered in southern California, also has pursued a sham effort to claim it is headquartered in Arizona, a state that has long tolerated for-profit college abuses, in order to keep getting VA money to enroll U.S. veterans.

Andrew S. Clark founded Bridgepoint Education in 2003 and was the company’s CEO through all of the bad behavior described above. He remains CEO of Zovio today.  The company paid him $4.72 million in 2018. That wasn’t his best year; in 2009, his total compensation was $20,532,304.

Why in the world is Delta steering its workers to Ashford University, with this kind of record of abusing students and seeking to escape accountability?  Delta employees should be asking.

Zovio has announced a deal with Oregon-based Pacific Seafood “to expand their employee tuition benefits, making it possible for more than 3,000 of their employees to obtain associate, bachelor’s or master’s degrees at Ashford University without the stress of taking out student loans.”