posted at 4:01 pm by David Halperin

American Airlines tells its workers that one of the employee benefits for which they are eligible is “career development training,” and an internal employee benefits web page lists American’s “learning partners and other sources for tuition discounts, waived enrollment fees and education grants to help you further develop your professional skills.” The schools listed by the company as providing benefits for its thousands of employees — managers, pilots, flight attendants, reservations agents, and others — are for-profit colleges DeVry, the University of Phoenix, American Intercontinental University, Strayer University, and Capella University, plus a single state-run institution — Penn State’s online World Campus.

The American employee web page links directly to special pages tailored to the company’s workers on each of the partner college web sites, where, in some cases, eager recruiters quickly appear in pop-up windows ready to start a live chat.

Some American Airlines workers might end up worse than when they started if they begin such a chat and utilize these alleged employee benefits. DeVry, the University of Phoenix, and Career Education Corp., the operator of American Intercontinental University, all in recent years have been under investigation by multiple federal and state law enforcement agencies for deceptive recruiting and other questionable business practices that have left many students with overwhelming student loan debts and without enhanced career prospects.

DeVry’s CEO abruptly resigned last week in the wake of a major lawsuit against the company by the Federal Trade Commission for deceptive advertising; the school has for years claimed a 90 percent job placement rate that was allegedly derived, for example, by counting as placed a DeVry business administration graduate who was working as a server at the Cheesecake Factory. (DeVry says it did nothing wrong.)

The University of Phoenix, which also has been under investigation by the FTC, as well as the Securities and Exchange Commission, has a 4 percent graduation rate for first-time, full-time students in its online division. Last year the Defense Department temporarily suspended the school from enrolling U.S. troops with Pentagon benefits because of what it called “disconcerting” violations of recruiting rules. A 2012 Senate investigation found that the University of Phoenix spent $892 per student on instruction in 2009, compared to $2,225 per student on marketing, and $2,535 per student on profit — one of the lowest amounts spent on instruction of any of the for-profit colleges the Senate investigators examined.

Career Education Corp., meanwhile, has been under investigation by the FTC and the SEC, as well as the attorney generals of 21 states and the District of Columbia. In 2013 it agreed to pay more than $10 million to settle charges brought by New York’s attorney general that it significantly inflated its job placement rates in communicating with students, accreditors, and government officials, for example counting as placed in a permanent job a student who worked one day at a health fair created by Career Education Corp. itself. (The company denied the charges.)

American Airlines steering its employees to for-profit colleges, some of whose owners are under law enforcement investigation, and all of which are starved for students and charge high prices, seems a questionable employee benefit. Why would American push its employees to those for-profit institutions, when higher quality, lower priced options are often available?  Many state schools are more affordable than the for-profit schools on American’s list, even taking into account the 5 to 10 percent discounts the for-profits are offering American employees.

FBI employees have their own page on the University of Phoenix site — with a 10 percent tuition discount offer, as compared with 6 percent for American Airlines employees and 8 percent for United Airlines employees. While some FBI agents may be enrolling at troubled for-profit colleges based on the Bureau’s referral, agents also have been involved in raiding fraudulent for-profits and aiding in the criminal prosecution of college operators.

United Airlines employees get the same 10 percent discount as American employees on their own page at the American Intercontinental University site. Home Depot employees get only a 5 percent discount from that school. Poke around and you will find many more such arrangements between major employers and for-profit colleges that are under law enforcement investigation.

UPDATE: 05-28-16: I did poke around for another 30 seconds just now, and learned that Home Depot, for one, also has an education partnership, including a “14% tuition grant,” with for-profit Kaplan University. Kaplan has a troubling record and in recent years has been under investigation or sued by the U.S. Department of Justice, U.S. Department of Education, and the attorneys general of Delaware, Florida, Illinois, Massachusetts, and North Carolina. 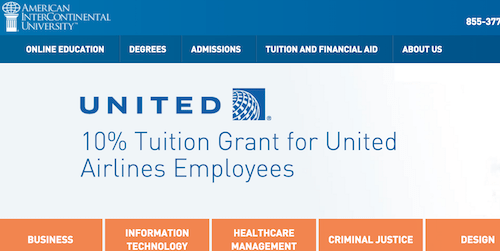 It’s easy to see why the for-profit colleges would be attracted to such “partnerships,” especially because any cash contributions from an employer for employee tuition would ease compliance with the federal 90-10 rule, which requires for-profit colleges to obtain at least ten percent of their revenue from sources other than the U.S. Department of Education.

But is any money flowing the other way? Are any of these employers obtaining cash or anything else of value from these for-profit college companies for directing employees to such overpriced schools? For-profit colleges, desperate to sign up new students, cash their checks, and keep investors happy, are willing to pay handsomely for student leads in other contexts.

Such arrangements, if they existed, would seem to be a breach of trust by the employer. But even if no such compensation is provided by the for-profit colleges to employers, recommending troubled colleges to employees suggests that, at least, these employers are not doing sufficient due diligence about what constitutes a desirable benefit for their workers.

I posed these questions to American Airlines spokesperson Joshua Freed, but the only response he would provide on behalf of the company was: “I can tell you that we try to provide a wide variety of educational opportunities for our employees.”

Not all for-profit college programs are bad, and there are fine teachers and successful students at even some of the most troubled institutions. Historically, some for-profit schools have sought to work directly with particular employers or industries, tailoring training to industry needs. But looking at the online portals to which employers direct their employees today, it appears they are being herded like sheep into the kind of misleading recruiting process aimed at the general pool of for-profit college recruits, without regard to their employer’s need.  In that light, on balance, many students can get a better education at a better price at public colleges, many of which now offer flexible options like online classes.

Employers who offer dubious “benefits” to their workers to attend for-profit colleges that are under law enforcement investigation for deceiving students should be asked by government regulators, media, employee unions, and individual workers whether they are receiving any compensation for steering their employees to these predatory colleges, and whether there aren’t superior educational benefits they could be offering instead.

And incidentally, the U.S. Department of Education, which last year sent nearly $8 billion in taxpayer money for student grants and loans to seven big for-profit colleges under law enforcement investigation — DeVry, University of Phoenix, and Career Education Corporation, plus EDMC, ITT Tech, Kaplan, and Bridgepoint — thus essentially giving those schools the Department’s seal of approval, needs to keep asking itself the same question.