posted at 8:30 am by David Halperin 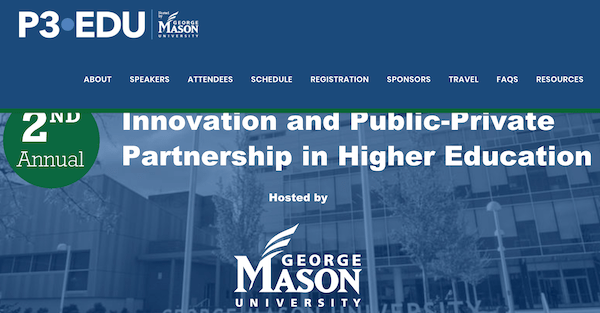 As Betsy DeVos’s Department of Education works this morning to outsource more and more taxpayer-funded student aid to predatory for-profit online education companies, Wall Street investors see a new gold rush. Seeking to avoid the stigma and regulatory requirements of openly running a for-profit college, they are finding willing partners in another taxpayer-funded sector: state college and university presidents, who are anxious to make their schools 21st-century high tech models.

But whether these new so-called “public-private partnerships” will well serve students and taxpayers is another matter.

George Mason University in Virginia is one public school seeking to ride the wave, contemplating the creation of its own online superschool and hosting next month, for a second year in a row,  its P3-EDU conference, “an invitation only event bringing together a select group of university leaders and a handful of private company CEOs to network and share best practices around public-private partnerships in higher education.”

In advance of that conference, George Mason’s chapter of the American Association of University Professors is holding an event this evening, “Are We Next?: What you need to know about Mason’s Private-Public Online U.” I’m a panelist, and here’s some of what I plan to say:

The many bad actors in for-profit higher education are worse than we could tell you in this session, worse than you can imagine: There is appalling deceptive and coercive recruiting of students, financial aid fraud, lying to government overseers.  Many students — single moms, veterans, immigrants, first in their family to attend college — are left with overwhelming debt, and often with no career improvement. Many just return to their old jobs at Office Depot.

Listen to these findings:

The Department of Education reported in 2014 that 72 percent of the for-profit college programs it analyzed produced graduates who, on average, earned less than did high school dropouts.

A 2016 study published by the National Bureau of Economic Research concluded that for-profit college students, graduates and dropouts combined, earned less after leaving school than they did before they enrolled.

Today, 9 percent of all college students attend for-profit colleges, on campuses and online. These schools account for 34 percent of student loan defaults.

Some of the bad for-profit schools have shut down in recent years, but many continue with a business model focused on signing up as many students as possible, getting as many taxpayer dollars as possible, spending as little on education as possible. The money goes to lead generators, landlords, and lawyers, plus, of course, executive salaries and investors.  When the operators realize have sucked all the money out, or their programs are cut off from federal aid due to violations, they shut down overnight, students are left out in the cold, and taxpayers have to finance another bailout.

Betsy DeVos and her top aides, many of them former executives and lobbyists at for-profit colleges, seem bent on doing everything possible to sustain these predatory operations.

Behind these schools, you see, are not just strip mall crooks.  They are Wall Street leaders, high tech leaders. They sit on boards of the biggest tech giants and most prestigious charities. They are friends with top politicians.

And the lesson being drawn by some leaders of public higher education is: Let us in. An innovation gold rush is seducing the leaders of public institutions — we don’t want to be left behind in the technology future, we want to have cool friends.

Which is leading to deals that are bad for their institutions, bad for taxpayers, bad for students.

So Mitch Daniels locked Purdue and the people of Indiana into a long-term, high-priced deal with Kaplan, a company with a track record of predatory practices and law enforcement investigations.

The meltdown of a major for-profit chain, the EDMC schools purchased by the faith-oriented charity Dream Center, has been in the news lately. What gets lost sometimes is that for a for-profit chain, many of the EDMC schools actually provided quality instruction. But they still have destroyed the financial futures of countless people because of deceptive promises and prices that condemned even successful graduates to a life of debt.

Previously, Dream Center wanted to buy ITT Tech, with had much worse instruction, and one of their officials called me for my views. I asked, why do you want to buy toxic assets?  He said: Because it would take years to build an online school by ourselves.

Online schools are much cheaper to run, but schools rarely pass the savings on to students. And the evidence, including recent reports from Brookings and from a GMU professor, Spiros Protopsaltis, suggests that, despite the immense promise of technology for learning, online higher education often doesn’t deliver for students, especially the kinds of students, inexperienced students, heavily recruited by online colleges.

Today’s public and nonprofit college executives are not only driven by high tech fear of missing out; they’re also sometimes enticed by the prospect of making more money for themselves, now, and in the future.

A number of public college presidents have joined the boards of predatory for-profit colleges and have, of course, been paid to do so.

One was Alan Merten, President Emeritus of George Mason.  His compensation at GMU was $1.87 million in 2012, his last year as president, making him one of the highest paid university leaders.

He was recruited to the board of for-profit DeVry Education in 2012 by then-board chair Harold Shapiro.  Shapiro had joined the DeVry board  after serving as president of Princeton and the University of Michigan. In 2016, Merten explained to me his decision to join the DeVry board:  “I am interested in education of all types … I wanted to have influence, and I believe I have had influence… I feel like I have a responsibility to ask tough questions, and when I ask tough questions,  I get answers.” He said that in an industry of “good guys and bad guys… DeVry happens to be one of the good guys.”

But the record did not bear that out.

In January 2016, the Federal Trade Commission sued DeVry for misleading students about job placement rates and salaries for graduates. For years DeVry’s advertising claimed that 90 percent of its graduates actively seeking employment got jobs in their field within six months of graduation; and that DeVry graduates had 15 percent higher incomes than the graduates of all other colleges. The complaint alleged DeVry counted many graduates as working “in their field” when they were, for example: a business administration graduate working as a server at the Cheesecake Factory; or another with a health care management specialization working as a car salesman.

DeVry said it did nothing wrong. But at the end of 2016, it agreed to a $100 million settlement with the FTC.

Chris Neiweem, an Iraq war veteran, testified before Congress in 2013 about his job at DeVry, which was to recruit veterans. Veterans and servicemembers, who have earned VA and Pentagon education funding for their service, are a critical target of for-profit colleges, which are required by law to obtain at least ten percent of their funding from sources other than Department of Education aid. Neiweem says his bosses told him to get “asses in classes,” even for veterans deployed to active combat zones or who otherwise might not benefit from the programs. Worse, they told him to represent himself as a “military adviser,” which might have suggested he was associated with the Defense Department. Other former DeVry recruiters have corroborated his account.

I asked Alan Merten about Chris’s testimony to Congress. Merten, who served on the DeVry board at the time of the testimony, said he was not aware of it. When asked if he was concerned about DeVry’s overall recruiting record, Merten told me that decisions to enroll are the responsibility of individual students. As to whether he had any concerns about DeVry trading on the reputations of esteemed academics, he said, “I don’t get the feeling that I have been used.”

So I am glad we’re having this discussion today about incentives, about money, and about the real risks for taxpayers and for students.