She’s Not Going To Jail, But DeVos Needs To Act On Predatory College Collapses 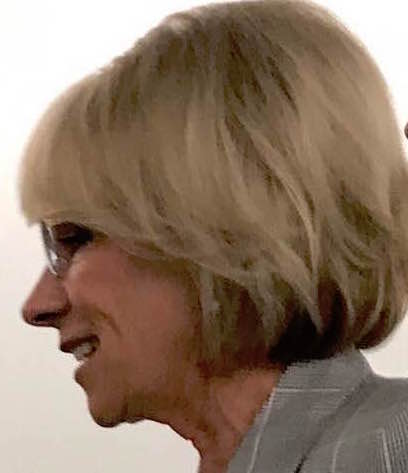 While a federal judge pondered throwing the book at Betsy DeVos for abusing ex-students of a shuttered predatory for-profit college chain, DeVos’s Department of Education seemed to finally take a small step to protect students and taxpayers from the possible collapse of another of these institutions.

Monday morning in federal court in San Francisco, U.S. Magistrate Judge Sallie Kim said she was “astounded” and “really disturbed” by the Department’s continued unlawful efforts to collect loan payments, and seize wages and tax refunds, from former students of schools run by the awful, now-collapsed predatory chain Corinthian Colleges. “At best, it is gross negligence. At worst, it’s intentional flouting of my order,” said Kim, who had previously directed the DeVos Department to stop trying to collect on these loans. She told Justice Department lawyers representing DeVos, “I’m not sure if this is contempt or sanctions” and added, “I’m not sending anyone to jail yet, but it’s good to know I have that ability.” (Kim’s subsequent written order, directing the Justice Department and the students’ lawyers from the Harvard Project on Predatory Student Lending to submit arguments about what sanctions are appropriate, didn’t mention jail time.)

In a filing with the SEC that same morning, Zovio, operators of Ashford University, disclosed that the Department is requiring the company to post a $103 million letter of credit — equal to 25 percent of the federal student grants and loan money Ashford received last year — in order to get the Department’s tentative approval to convert Ashford to a non-profit school. Such letters of credit are one means of ensuring that money is available to compensate students, taxpayers, and others in the event of a school collapse.

Zovio, like about a dozen other big for-profits, has sought to switch its school from for-profit to non-profit, which would allow it to escape the stigma and certain regulations that the industry’s bad behavior provoked. But most of these conversions, including Ashford’s, have been implemented in shady ways that allow the former for-profit owners to continue to make big money and to retain incentives to mislead, overcharge, and under-educate students.

In its SEC filing, Zovio pouted that, if forced to put up some money, it might now consider selling Ashford to someone else, rather than spinning if off. But, Zovio assured investors, such a sale would still allow Zovio to “enter into an education technology services agreement with the acquirer,” the same kind of lucrative contract it planned to reserve for itself with the converted Ashford. Selling Ashford, Zovio said, “may likely not require the posting of the 25% LOC with the Department.”

Zovio, formerly known as Bridgepoint Education, is used to getting its way.

A 2011 Senate committee hearing exposed the company’s egregious predatory practices — taking over a small Iowa non-profit college for its accreditation, engaging in deceptive recruiting to rapidly expand enrollment, spending little on instruction while paying its CEO, Andrew Clark, $20 million in a single year. After the hearing, then-Senator Tom Harkin (D-IA), chair of the Senate HELP committee, declared Ashford “a scam, an absolute scam.” The school has since been sued and investigated by multiple federal and state law enforcement agencies for deceptive and fraudulent behavior that has left many former students with crushing loan burdens.

Yet the company has shamelessly pressed on, with Clark still at the helm, taking billions in taxpayer dollars, and now trying to take the additional brazen step of operating as a fake non-profit. The school’s accreditor, after raising some concerns, eventually this year approved the for-profit conversion. Zovio may also have taken comfort in the fact that a top DeVos higher education aide, Robert Eitel, previously was a senior executive at the company. The Trump Veterans Administration has also seemed to side with Zovio, and against California’s veterans agency, over Ashford’s sham effort to claim it is headquartered in Arizona, a state that has long tolerated for-profit college abuses.

But Zovio’s bad behavior continues to dog it.  California’s attorney general in 2017 filed a major lawsuit against the company, alleging unfair and fraudulent business practices at Ashford.

Meanwhile, DeVos and her other top higher education aide, another former for-profit college executive named Diane Auer Jones, have taken heat this year, especially from House of Representatives committees, not only for abandoning measures to hold for-profit abusers accountable, and not only for failing to protect abused student borrowers, but also for mismanaging the collapse of three predatory college chains — Dream Center Education Holdings, Education Corporation of America, and Vatterott College. In each case, the Department failed to do enough to see the warning signs of failure, while the chains kept enrolling new students and taking in taxpayer dollars until their abrupt shutdowns.

A report released this morning from Ariel Sokol and Yan Cao of the Century Foundation offers valuable prescriptions for dealing with college collapses. If DeVos and Jones actually want to help students and taxpayers, they should take these recommendations seriously, and step up accountability measures.