posted at 7:55 am by David Halperin 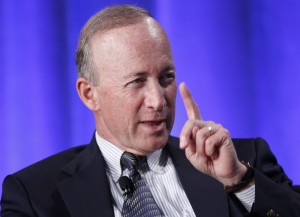 Last year, the annual convention of owners and executives of for-profit colleges (University of Phoenix, The Art Institutes, Kaplan, etc.), held in Las Vegas, featured paid speakers George W. Bush and Michelle Rhee, and, for entertainment, a fake knockoff version of Creedence Clearwater Revival. After a year in which the truth about their shoddy practices finally sent many for-profit colleges into a tailspin, they will gather again in June in Orlando. This year’s meeting of their trade association, APSCU, will feature: former Indiana Governor Mitch Daniels (R); retired Chairman of the Joint Chiefs of Staff Admiral Mike Mullen; and … Kool and the Gang.  Or, really, Kool, and his brother; most of the old Gang, including lead singer J.T. Taylor, who sang your hits “Ladies Night” and “Celebration,” are long gone.

Last year, after I questioned Reformer Rhee’s decision to speak to the cynical barons of for-profit education — owners of the kinds of underperforming schools I thought she stood against — she pledged to deliver a tough message in her APSCU talk. But having been barred from attending the conference, we smuggled out a tape revealing that Rhee instead delivered a kinder, gentler message that barely even alluded to criticism of her hosts.

This year, we should again challenge APSCU’s keynote speakers — Governor Daniels and Admiral Mullen — to actually tell the blunt truth to APSCU’s members: that many in their industry, including most of the biggest players, have been doing a disservice to our country by peddling high-priced, low-quality programs that leave many students deep in debt and fleece the taxpayers who finance federal financial aid.

As an advocate of small government and fiscal austerity, Governor Daniels, who is now president of Purdue University, should question how an industry that has been receiving as much as $33 billion a year from taxpayers can continue to fight against federal reforms that would hold it accountable for waste, fraud, and abuse. Governor Daniels should understand that this is not a free market program but a government program — the biggest for-profit colleges receive about 86 percent of their revenue from taxpayers.

The industry continues to spend millions of those dollars on lobbying, advertising, lawyering, and campaign contributions to block common sense rules that would cut off federal aid to schools that consistently abuse their students. Daniels should tell the APSCU members that they should curb their arrogant lobbying campaign, improve their programs, and halt their misconduct.

Admiral Mullen has been a a strong advocate for higher education for service members and veterans. He has championed America’s community colleges; he even made an unexpected appearance at President Obama’s community college summit in 2010 to tout the achievements of those institutions.  Community colleges provide many of the same kinds of programs as for-profit colleges, often with higher quality classes and almost always at a much lower price for students.

Last year, in remarks at Fort Stewart, Georgia, President Obama warned our military service members that some for-profit colleges “aren’t interested in helping you…. They are interested in getting the money.” He called the schools’ conduct “disgraceful” and told the troops that these schools are “trying to swindle and hoodwink you.”  Holly Petraeus, who directs service member affairs at the Consumer Financial Protection Bureau, has said that predatory for-profit colleges “see service members as nothing more than dollar signs in uniform.” Senator Tom Harkin has issued an extensive report documenting how for-profit colleges use deceptive and coercive recruiting tactics to lure our troops and veterans into costly programs that provide worthless credits or degrees — and huge student loan burdens.

APSCU’s website makes plain why they want Mullen to appear on their stage; APSCU boasts that Mullen’s appearance at the convention “will be a truly extraordinary moment for private sector education, bringing increased visibility and respect to the sector.”

But Mullen, who recently joined the board of General Motors, should tell the for-profit colleges that if they don’t start fairly competing for students by offering better value for the money, rather than by using high-pressure boiler room tactics, that they can expect to be driven off military bases and towns, and that they can expect our troops and vets to get the message and stop enrolling.

Both Governor Daniels and Admiral Mullen should consider whether they are prepared to deliver tough messages to the wealthy APSCU barons who have caused so much harm. If they aren’t, then for the sake of their own reputations, the cause of fiscal sanity, and the welfare of America’s students, they should just stay home.

UPDATE 06-18-13: In the end, without explanation, Admiral Mullen did not speak at the APSCU meeting. Mitch Daniels did, as did an added speaker, retired Army general Wesley Clark.