posted at 4:32 pm by David Halperin 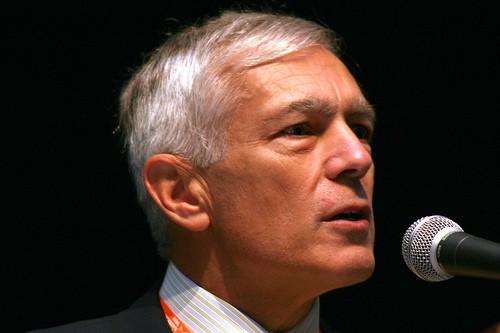 The main trade association of for-profit colleges, APSCU, seems to exist for the purpose of protecting the worst, most abusive, most predatory conduct by its member companies. Why else would the association, once again last week, attack the U.S. Department of Education for seeking to implement a law that simply requires career colleges that receive federal aid to actually train students to earn a living? Why else would it send its CEO to offer wholly incredible comments before a Senate committee? And what was General Wesley Clark doing speaking at APSCU’s annual convention?

APSCU and members of the for-profit college industry, which receives over $30 billion per year from taxpayer funds, have spent tens of millions of dollars to fight — with the Obama administration, in Congress, in the courts, and in the media — against the Administration’s “gainful employment” rule.  APSCU successfully pressed the Administration to water down the rule so that it only penalizes the most egregious conduct; penalties are incurred only if, year after year, two-thirds of a school’s graduates and dropouts are unable to pay back their student loans. But that dilution wasn’t enough for this remorseless industry, because plenty of its big players still flunked even this minimal test. So APSCU went to court and convinced a federal judge to nitpick the rule out of commission.

The Department of Education responded by holding a series of hearings around the country and also seeking written comments about what reforms to pursue next. Many former students and staff replied with harrowing accounts of for-profit college abuses — colleges lying to students to dupe and pressure them into signing up, lying to government auditors about recruiting practices and job placement, offering low-quality programs that left many students deep in debt with no improvement in career prospects.

At the conclusion of the hearings, the Department did what a coalition of student, veterans, civil rights, consumer, and other groups urged it to do — it announced it would promptly start a collaborative public process (called negotiated rulemaking) to create a revised gainful employment rule. (Disclosure: I participated in the effort to convince the Department to act.)

APSCU’s response to the Department’s decision was to engage in more whining. APSCU CEO Steve Gunderson declared his group “extremely disappointed” and expressed “fears of a repeated, faulty and confrontational process.” Gunderson threatened that the Education Department “must not repeat the biased and tainted regulatory process” of the last rulemaking.

In his own statement before the Department late last month, Gunderson had urged that it drop the gainful employment rule and let Congress take care of the matter. He said that knowing full well that his industry’s campaign contributions on Capitol Hill would ensure a stalemate that would block any reforms. And at APSCU’s annual convention in Orlando earlier this month, there was a panel addressing potential Department hearings whose title was just a mocking groan: “Negotiated Rulemaking – Here We Go Again.”

As I described a few months ago, APSCU had boasted that former Joint Chiefs of Staff chairman Mike Mullen would lend credibility to their industry — which has been attacked for fleecing U.S. veterans — by speaking at the convention. I urged Mullen to speak frankly about for-profit college abuses, or else cancel. For reasons unknown, Mullen ended up not appearing, but APSCU found a willing, presumably paid, replacement: General Wesley Clark. I wonder if General Clark was aware of the widespread abuses of our troops and vets by people he was addressing.

The day after denouncing the Department of Education for trying again to protect students, Gunderson was on Capitol Hill to testify before a Senate committee about higher education programs for service members. (WATCH here.) Before speaking, Gunderson was forced to listen while Christopher Neiweem, an Iraq War veteran, discussed his experiences recruiting military students to DeVry University. Neiweem described “a business culture that emphasized hasty enrollment over student needs.” According to Neiween, DeVry recruiters called Defense Department Tuition Assistance dollars “the military gravy train,” recruiters were told to present themselves as “military advisers,” and managers pushed recruiters to get military “asses in classes.”

Gunderson’s reaction to hearing cold hard facts from Neiween about coercive and deceptive recruiting aimed at our troops was to return to whining that critics, such as subcommittee chair Senator Dick Durbin, were demonizing his industry.

As he did at the Department of Education hearing, Gunderson began by asserting that he represented not only his member for-profit colleges but also “the millions of students who attend our institutions.” Many current and for-profit college students who have been deceived and abused by APSCU members would beg to differ with the assertion that Gunderson represents them.

Durbin raised with Gunderson an important concern regarding the federal 90/10 rule, which requires for-profit colleges to obtain at least 10 percent of their revenue from sources other than Department of Education-managed financial aid — on the theory that schools that cannot get anyone to pay out of their own pockets are not worth propping up. As Durbin noted, Pentagon and VA education aid is not counted as federal aid under the 90/10 rule, a situation that gives schools a heavy incentive to pack their classes with troops and veterans, whom the industry sees, in the words of federal oversight official Holly Petraeus, as “dollar signs in uniform.”

Gunderson responded with the remarkable assertion that “most people believe” that federal education aid coming from the Defense Department and VA “are not government funds.”

Gunderson’s argument was that troops and veterans had earned such education aid through their service. While it was nice of Gunderson to recognize the contributions of our men and women in uniform, his analysis did not make up for his industry’s abysmal record of misleading, overcharging, and underserving them. And it defies the dictionary and congressional spending rules to suggest that the money is not federal money. Only in the twisted world of the laws governing for-profit colleges, laws written under the heavy influence of cash-bearing lobbyists, is such federal money not treated as federal money.

Gunderson also told Durbin he would not defend a for-profit college that had engaged in bad acts. Instead, he said his role was to “lift up the sector.” Durbin responded that unless there are serious rules to prevent abuses, “You’re covering up for the bad guys.” And, indeed, by aggressively opposing minimal accountability standards for the industry, Gunderson is doing just that. Not only has Gunderson opposed the gainful employment rule, he also called President Obama’s 2012 executive order to protect our vets against for-profit college recruiting abuses a “deeply unfortunate development.”

While Gunderson may not actively defend his member schools when they are caught engaging in bad behavior, nor has he criticized them. Most of the major for-profit college companies are under investigation for fraud, deception, or other bad acts. Various state attorneys general are investigating Career Education Corp. (CEC), Corinthian Colleges, DeVry, Education Management Corp. (EDMC), ITT, Kaplan, and University of Phoenix. California’s attorney general found that Corinthian falsified students’ employment records to inflate the company’s job placement rate for graduates; in 2008, the company paid $6.6 million to settle the investigation out of court. Corinthian has been under investigation by at least five other state attorneys general: Florida, Illinois, Massachusetts, New York, and Oregon, as well as by the federal Consumer Financial Protection Bureau and the Securities and Exchange Commission, which recently issued a subpoena to the company for documents relating to recruitment, attendance, degree completion, job placement, loan defaults, and compliance with Department of Education regulations.

Every one of those for-profit college companies, with the exception of the University of Phoenix, is a current member of APSCU. Yet APSCU generally says nothing when its members are accused of, or receive penalties for, bad acts.

Last September, I wrote about how APSCU stayed silent about three other companies that had landed in hot water: (1) FastTrain College, raided by the FBI amid allegations of fraudulent marketing practices; (2) the marketing firm QuinStreet, forced by 20 state attorneys general to shut down GIBill.com, a website that deceived countless veterans into believing they were on a government site that offered unbiased information, when in fact the site shilled for for-profit colleges; and (3) ATI, charged by the Justice Department in a civil complaint with  having “engaged in a widespread scheme to defraud” federal and Texas authorities in order to receive federal funding to which it wasn’t entitled.  All three companies were members of APSCU at the time. Quinstreet still is, but it looks like since then FastTrain and ATI have disappeared from APSCU’s membership roster. I’d love to know why.

It doesn’t have to be this way. Rather than advantage the schools that are systematically ruining students’ lives with deceptive recruiting, high prices, and weak programs, a trade association of for-profit colleges could instead work to advantage those honest member schools who actually are helping students to learn and train for careers. Such an organization could cooperate with the Department of Education to establish rules that reward good schools and strip federal funding from bad ones. Over the long term, that is the only way that for-profit higher education can thrive. But APSCU, instead, appears to subscribe to the quick buck ethos of its biggest, wealthiest, most powerful members: make all the money you can before the truth catches up with, and students — veterans, single parents, immigrants, and other struggling Americans — be damned.