Who’s Lobbying To Get COVID-19 Cash to For-Profit Colleges?

posted at 7:44 pm by David Halperin 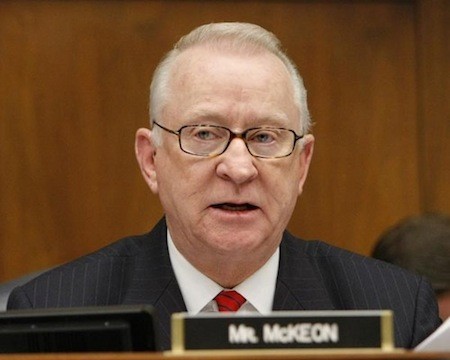 Howard “Buck” McKeon, a Republican former chairman of the House Education Committee, heads up the list of lobbyists paid, largely with your federal tax dollars, to lobby Congress to send even more tax dollars to for-profit colleges in the COVID-19 era. Lobbying reports for the first quarter of 2020 show that just a few of the largest for-profit colleges, plus a couple of their trade associations, spent close to a million dollars on lobbying Congress and the Trump administration from the start of 2020 until the end of March, which was when President Trump signed the $2 trillion CARES Act emergency relief bill. That bill will provide about $1 billion in emergency student aid to for-profit colleges, out of some $6 billion in total cash assistance to institutions of higher education (with another $6 billion to follow, with more money for for-profits, to move learning online).

The for-profit college industry already has been getting some $20 billion a year from federal taxpayers in recent years (down from a peak of $32 billion ten years ago), in the form of student grants and loans. Many for-profit colleges get 80 percent, 90 percent, or even more of their revenues from the federal government, and they use a portion to hire the most expensive, best-connected lobbyist firms in Washington. Often the lobbying focuses on trying to block or overturn rules aimed at holding the worst predatory colleges accountable for deceiving and abusing students. But right now it’s also aimed at getting for-profit colleges, regardless of how they treat students, as much cash as possible.

Some career training schools work hard to aid their students, and charge fair prices, and they deserve a chance to help their students, staffs, and themselves to get through the COVID crisis. Other for-profit colleges have repeatedly engaged in deceptive advertising, coercive recruiting, financial aid fraud, lying to accreditors and government overseers, and other abuses; they also under-spend on teaching, over-charge for tuition, and regularly leave students with overwhelming debt. These for-profit college companies have been ruining the financial futures of many struggling Americans. Their schools don’t deserve another dime.

Here are some of the lobbyists working for for-profit colleges, some seeking to grab a large slice of the COVID-19 aid pie for their clients.

The for-profit colleges’ main lobby group, CECU, paid Fulcrum Public Affairs LLC $60,000 for lobbyists Oscar Ramirez and Dana Thompson to lobby on issues including the CARES Act, the earlier Families First Coronavirus Response Act, and the reauthorization of the Higher Education Act.  CECU, which has repeatedly sought to block even the most basic standards of accountability for for-profit schools, reports it spent another $130,000 for its in-house lobbyists, Michael Dakduk and former House budget committee aide Steve Gonzalez, to work on those bills and other legislation.

Keiser University paid former congressman McKeon and Jeffrey Andrade of the McKeon Group, Inc. $50,000 to lobby on issues including the CARES Act. It paid lobbyist Terrence Wolfe of New Century Government Affairs $20,000.00 to do the same.

Florida-based Keiser now stands to get $21.2 million in new taxpayer funding from the CARES Act.

Keiser University’s “chancellor and CEO” Arthur Keiser is a former board chair and a long-dominant figure in CECU, the industry lobby group. While in Congress, McKeon worked with CECU (then called APSCU) to block measures to hold predatory colleges accountable, as he accepted campaign contributions from the industry, with Keiser’s assistance, and even owned shares in notorious predatory school Corinthian Colleges.

Meanwhile, Keiser University and the U.S. Justice Department reached an agreement in 2015 under which Keiser, without admitting misconduct, would pay $335,000 to settle a lawsuit under the False Claims Act, charging that the school defrauded taxpayers in the receipt of Department of Education funds. Three years earlier, to resolve a two-year investigation by the office of Florida attorney general Pam Bondi under the state’s Deceptive and Unfair Trade Practices Act, Keiser’s schools agreed, without any admission of guilt, to  offer thousands of former students free job retraining and that its staff would not misrepresent information about the schools to prospective students. Arthur Keiser also engineered a conversion of his school to non-profit status that was so sketchy it made the front page of the New York Times.

Perdoceo, which runs American Intercontinental University and Colorado Technical University, paid Barnes & Thornburg LLP $20,000 for the lobbying services of Edward Ayoob, former counsel to ex-Senate Democratic leader Harry Reid, and another $30,000 for lobbyists from Duane Morris LLP. The two Perdoceo schools, already mostly online, stand to receive $2.7 million from the CARES Act, even though the bill mostly aims to help students make the transition from physical campuses to online learning.

Perdoceo has faced extensive law enforcement actions for its predatory practices, including a recent suspension from GI Bill funding by the VA, a $494 million settlement with 49 state attorneys general over alleged deceptive and abusive recruiting practices, and a $30 million settlement with the Federal Trade Commission over the company’s use of fraudulent third-party websites to lure students.

The University of Phoenix paid $50,000 to lobbyist Steve Elmendorf and others from the firm Subject Matter and spent another $290,000 on its in-house lobbyists, Conwey Casillas and Eric Rizzo. It paid the giant lobby firm Brownstein Hyatt Farber and Schreck, including lobbyist Alfred Mottur, a former senior Democratic Senate staffer, and Brian McKeon, former chief of staff to Senator Jean Shaheen, another $50,000.

The University of Phoenix, which at its peak was getting some $4 billion in a single year from taxpayers, is to receive about $6.6 million from the CARES Act.

Last December, the FTC reached a $191 million settlement with the University of Phoenix over ads that falsely implied the school had arrangements with major employers to hire its graduates. Phoenix also has faced investigations and actions by the Department of Education, Department of Defense, Department of Justice, and Securities and Exchange Commission, and multiple state attorneys general for violations and alleged violations of law.

DeVry University paid Barnes & Thornburg $40,000 for higher education lobbying by Jacob Bonifield. DeVry is in line to get $4.7 million from the CARES Act.  DeVry also has a troubled past, with multiple law enforcement investigations and reports of deceptive recruiting. In December 2016, DeVry agreed to pay $100 million to settle a lawsuit brought by the Federal Trade Commission alleging that the company misled prospective students with ads that falsely claimed high job placement rates and salaries.

Zovio, operator of Ashford University, paid $20,000 to law firm Holland & Knight and another $30,000 to Atlas Advocacy. Ashford is getting only $1001 from the CARES Act, as all of Ashford’s students are already online, after the school, which has faced repeated law enforcement investigations and actions, broke its promise to Iowans to keep a physical campus in that state.

Universal Technical Institute paid The Cormac Group, LLC $20,000 for higher education lobbying, and Terence Wolfe also reported serving as a lobbyist for the schools. The school stands to receive some $33.1 million in CARES Act funding.

ECPI paid the same Cormac Group another $ ​20,000 for lobbying on higher ed issues, including the gainful employment rule, a key accountability measure that Trump education secretary Betsy DeVos, at the behest of the for-profit college industry, has now cancelled. ECPI is set to get about $16.8 million from the CARES legislation.