posted at 2:25 pm by David Halperin 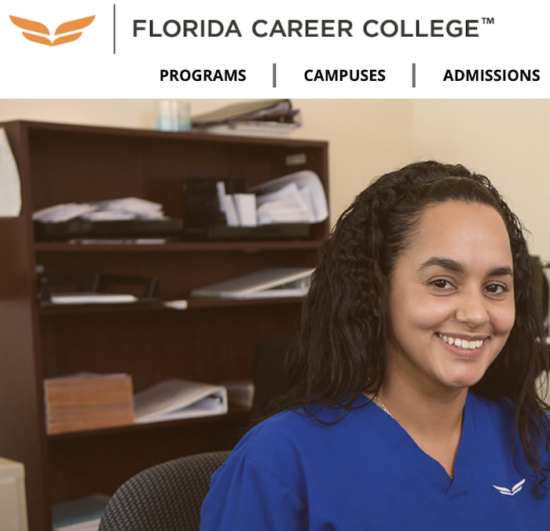 Faced with concerns from critics in Congress and elsewhere that many for-profit colleges will take advantage of the COVID-19 crisis to accelerate predatory behavior, the industry’s chief lobbyist, Steve Gunderson, has been repeating his claim that the bad actors among for-profit schools have shuttered, and what remains are sincere, hard-working operations focused on helping students.

A new blockbuster lawsuit brought by students who recently attended the Florida Career College chain of schools undermines that industry claim — and adds an assertion of unlawful racial discrimination.

Florida Career College (FCC) is definitely still operating. It has 10 campuses spread across Florida, and an eleventh in Houston, Texas. The school offers programs in business, health care, IT, cosmetology, and HVAC repair. The chain is slated to get more than $17 million in emergency federal aid under the new COVID-19 relief bill. That’s on top of a lot more federal money: In the last year for which data was available, 2017-18, Florida Career College received $75.3 million in student aid from the U.S. Department of Education, accounting for 87 percent of its total revenue, and got even more taxpayer money from the U.S. Department of Veterans Affairs to enroll student veterans.

One of the students suing the school, Kareem Britt, visited FCC after he saw Facebook ads advertising the school. Based on what he alleges were false promises, he enrolled in the HVAC program at FCC’s Lauderdale Lakes campus in 2018. Britt alleges that he felt pressured to take out student loans. Once enrolled, he says, he found that FCC didn’t have the appropriate equipment to train students. He also noted that most of his fellow students were Black or Latinx. Since completing the program last year, Britt has not found steady work as an HVAC technician. Instead, he works as a cook at a hotel, a job he held before attending FCC. He can’t make the payments on his $9500 in student loans, and FCC has refused to give him his diploma.

Another former FCC student in the case, Monique Laurence, completed the medical assisting program at FCC’s Orlando campus in 2018. She alleges that school officials regularly pulled students out of class to pressure them to sign new financial aid commitments. She calls the school “a scam.”

The lawsuit alleges that FCC requires its recruiters to call 100 to 150 people per day and enroll three to five of them every week, and that recruiters who do not meet enrollment quotas are fired. Recruiters call or text prospects as frequently as three to four times an hour.

In addition to the “climate of fear” created by such pressure, according to the complaint, managers at FCC trained recruiters to deceive students. Recruiters would overstate the school’s job placement rates. They would tell prospective recruits them some programs were fully subscribed to pressure them to sign up quickly for other programs. Allegedly, one Tampa-based recruiter falsely, and with management’s knowledge, told prospective students that they were coming in for job interviews rather than enrollment at the school.

The students’ complaint also documents that FCC programs cost far more than comparable programs at Florida state and non-profit colleges, and that FCC generally spends far less on instruction than such neighboring schools. FCC’s programs, most of which are nine months long, cost between $18,450 and $51,925.

Earnings of former FCC students are generally low. For example, students who attended the FCC Lauderdale Lakes
and Orlando campuses had median earnings between $12,800 and $24,500. But the complaint alleges that FCC does not tell students they will earn so little after graduating, and also fails to make clear how much debt they will face.

As measured by federal standards, the new complaint alleges, 77 percent of FCC students who took out federal loans, and left the school in 2013 and 2014, were unable to pay even a dollar of their loans within three years of leaving.

The complaint also alleges that FCC targets African-American students, including by:

— Using Black models in advertisements;
— Taking advantage of Facebook and Instagram options to target users based on interest in “African Americans” and/or “African-American Culture;
— Advertising on radio stations and TV shows with predominantly Black audiences, and on public buses; and
— Conducting outreach at high schools with high percentages of Black students.

Florida Career College is owned by International Education Corp. (IEC), whose CEO, Fardad Fateri, previously was an executive at the now-collapsed, notoriously predatory Corinthian Colleges, as well as at for-profit DeVry University; both chains have been in major trouble with law enforcement. IEC acquired Florida Career College in 2014 from Education Training Corporation (ETC), which filed for bankruptcy that year.

Florida Career College and the other IEC schools are members of CECU, the for-profit college trade group that Steve Gunderson heads.

The FBI had raided Florida Career College back in 2007.  According to a 2013 U.S. Department of Education inspector general memo filed at the conclusion of a six-year investigation, the raids came after undercover agents observed Florida Career College recruiters “engaged in activities that included coaching students to lie about high school graduate status, income, and tax filing status, as well as producing fraudulent high school diplomas.” That investigation, however, closed with no criminal charges filed. It’s unclear if the Department disciplined FCC and, if not, why not.

In 2018, Florida’s Department of Veterans’ Affairs announced it was withdrawing approval for federal GI Bill payments at all ten of FCC’s Florida campuses. Without such approval from a state agency, the federal VA will not provide GI Bill money to cover veterans’ educational costs. Student veterans charged that FCC didn’t warn them before they enrolled that the school was in danger of losing its eligibility for GI Bill funding. (It’s not clear how FCC would be able to comply with the federal 90-10 rule, which requires them to get at least 10 percent of their aid from sources besides Department of Education aid, in the absence of GI Bill funding.)

Only one of seventeen FCC programs passed the federal gainful employment rule, which measures whether graduates’ earnings are sufficient to allow them to pay down their student loans. That atrocious performance level would have put FCC at risk of soon losing eligibility for taxpayer dollars — except that Trump education secretary Betsy DeVos, who has done almost everything in her power to shield predatory for-profit colleges, trashed the rule last year.

My efforts to obtain a reaction to the lawsuit from Florida Career College officials went nowhere — the website offers no email address or contact form, a live chat operator referred me to the school’s phone number, and the phone options did not produce a live operator.