posted at 5:35 am by David Halperin 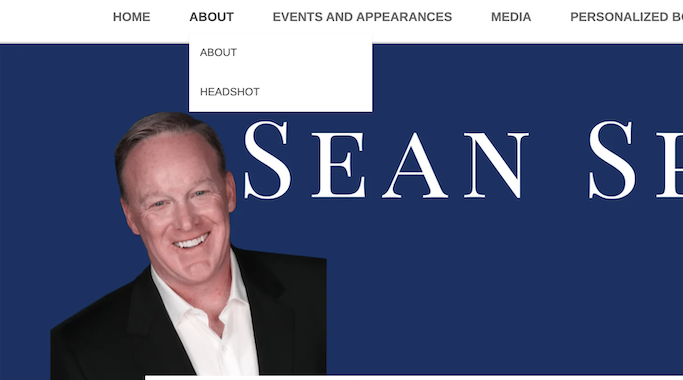 As White House press secretary, he started off telling us the falsehood that President Trump drew the biggest inaugural crowd ever, then defended Trump’s lie that millions voted fraudulently in 2016, and kept going downhill from there. Seeking his fortune after leaving the administration, Sean Spicer started his own consulting firm, became an advisor to the main Trump super PAC, and danced with the stars.

Now Spicer is dancing with the parasitic for-profit college industry, shilling for the owners of Globe University, a Minnesota-based chain of career schools that shut down after the state’s attorney general proved in court that the schools were aggressively ripping off students.

This week Spicer published an op-ed in the Washington Times entitled “Political vendettas against career schools hamper access to necessary programs; Globe University suffers the wrath of partisan idealogues.” According to Spicer’s essay, there are only “a few bad actors” in the for-profit college industry, Globe wasn’t one of them, and it got a raw deal from a rabid Obama administration.

Spicer praises Terry Myhre and his family, who owned Globe and the related Minnesota School of Business (MSB), as “professionals” who “dedicated their lives to providing education that delivers a pathway to future career success to students who otherwise may have struggled to find success in mainstream education.”

But, says Spicer, Globe and other for-profit colleges “suffered relentless attacks under the Obama administration along with undeterred attacks by state attorneys general, and some misguided members of Congress.”

As was the case when he shilled for Trump, Spicer is not telling the truth.

A devastating 2012 Minnesota Public Radio investigation of Globe, relying on accounts from numerous former staff and students, documented that the Myhres’ schools advertised heavily with promises of career advancement, and that its recruiters subjected students, many of them low-income, to misleading and manipulative sales pitches.

One former Globe recruiter said of the prospective students, “I fed off of their own shame, their own disgust they had with their own lives.” Managers pressured recruiters to sign up students, even ones clearly not ready to succeed in the programs. Recruiters, in turn, exaggerated job placement rates, starting salaries, and the amount of financial aid available.

Globe recruiters reported, “We’d just slam them with phone calls, with e-mails. I had to hit a certain quota of students every quarter to keep my job,” and, “We were really focusing on recruiting the bottom-of-the-barrel-type students, the ones that rarely had the means. Essentially, if you have a heartbeat and you can sign your name, you qualify for [federal] loans.”

The deceptions paid off. At its peak, Globe and MSB, which operated programs in health care, business, technology, and other fields, had some 10,000 students at 20 campuses in Minnesota, Wisconsin, and South Dakota, and was getting around $125 million annually in taxpayer-funded student grants and loans.

Those federal dollars helped keep the Myhres in luxury homes in Florida and Minnesota and who knows where else.

Meanwhile, the public radio report found, only 25 to 50 percent of first-time students graduated from various Globe programs. And while some students no doubt benefitted from the programs, Globe University graduates were leaving with an average of $44,824 in student loan debt, and they were almost five times as likely to default on their loans as graduates of the University of Minnesota.

In 2013, a former Globe dean, Heidi Weber, won a $400,000 whistleblower lawsuit against Globe after she was threatened and then fired for reporting deceptive recruiting in the school’s medical assisting program.

Globe denied all the allegations, but then-Minnesota attorney general Lori Swanson believed the employees and students, and in 2014 she sued Globe. A Minnesota court ruled in 2016 that Globe had engaged in consumer fraud and deceptive trade practices by misleading recruits to its criminal justice program about the job opportunities they would have. After that ruling, Minnesota’s higher education agency moved to shut down Globe and MSB.

Based on the court verdict and other information, the Obama Department of Education, in late 2016, cut off federal aid to the schools, with Under Secretary of Education Ted Mitchell saying, “Globe and MSB preyed upon potential public servants – targeting those with a sincere desire to help their communities. These institutions misrepresented their programs, potentially misleading students, and abused taxpayer funds, and so violated federal law.”

The Obama administration also blocked an effort by the Myhres to transfer four former Globe campuses to Broadview University, another for-profit school it owns in Wisconsin.

But after the election, the Trump-Betsy DeVos Department of Education reversed that order and put those four Myhre campuses back in business.

What else would you expect from the president who brought us fraudulent Trump University and a privatizing education secretary who has staffed her top ranks with former executives of predatory colleges and has worked to eliminate nearly every accountability measure regulating for-profit schools?

In November, Globe and MSB filed for bankruptcy to avoid paying its creditors, most of them former students whom the Minnesota Supreme Court had declared are entitled to refunds. The current Minnesota attorney general, Keith Ellison, responded, “MSB and Globe committed pervasive fraud that left students who wanted to serve their communities as police and probation officers with nothing but worthless degrees and a mountain of debt. The schools fought for years to evade responsibility and lost. Now they’re filing for bankruptcy instead of doing the right thing and paying students back for the fraud they perpetrated.”

In his op-ed, Spicer defends the bankruptcy, and he heaps praise on the Myhres for enrolling so many low-income students at their schools. But enrolling them, and cashing their federal aid checks, was not a good deed when so many students were deceived and left worse off than when they started.

Finally, Spicer cites an ex-U.S. congressman as an expert on the matter. “Former Wisconsin Rep. Steve Gunderson,” he writes, “knows the Globe and its owners well and cites this as the best example of the Obama administration’s ideological vendetta against career schools. The Globe, according to him, was one of the good guys, the proverbial baby that got thrown out with the bath water.”

Opposition to defrauding students and taxpayers is not an ideology. Schools are not entitled to taxpayer aid if they have engaged in regular abuses. And that paragraph in Spicer’s article gives away the game.

It’s well-known, as Spicer says, that Gunderson, a Republican, is close to the Myhres. What, amazingly, Spicer does not say is that Gunderson is not merely some wise, good-hearted former congressman. Since 2012, Gunderson has been paid a hefty salary to be president and CEO of CECU, the trade association that lobbies in Washington for for-profit colleges. Under Gunderson, CECU has fought relentlessly to eviscerate rules and regulations aimed at holding colleges accountable for abuses. It also has harbored many of the worst for-profit school chains — Corinthian, ITT, EDMC, Kaplan, and more — as members until those chains collapsed under the weight of their own fraud and deceptions, at which time Gunderson sometimes pretends he never knew those bad actors at all. All the while, Gunderson has insisted that critics of the for-profit college industry are driven by an ideological opposition to the schools — just like Sean Spicer now says.

Indeed, after the state of Minnesota and then the Obama administration took action against Globe, Gunderson published an op-ed in Wisconsin defending about the Myhres. “Like me,” he wrote, “they are Scandinavian Lutherans. They are as fine a family as one could ever call friends and colleagues.” Of the Obama administration’s action to end federal aid to the Myhre’s schools, Gunderson has said, “This is a good school that got caught up in the politics of the day…. It was clearly the best example of the ideological vendetta of the last six to eight years.”

Why is Sean Spicer publishing an article parroting Steve Gunderson over this obscure school?

CECU has previously hired Gunderson crony, and Trump crony, Newt Gingrich to endorse its schools and agenda. Gingrich is one of many powerful DC influence-peddlers, from Bob Dole to Trent Lott to Dick Gephardt, whom CECU or others in its industry have hired to soft-pedal abuses and keep access to the torrent of taxpayer dollars that sustain it.

Because for-profit colleges get most of their revenue from the government, we pay for all this lobbying and all those op-eds.

Spicer and Gunderson did not reply to my questions as to whether CECU, or anyone else, is paying Spicer for his spirited op-ed cheerleading on behalf of a predatory for-profit college that tricked and abused low-income students. But what do you think?

My colleague Yan Cao from the Century Foundation provides some disturbing information, coming out of the  Globe bankruptcy proceedings, about how the Myhres grabbed much of the remaining cash as their schools were collapsing, thus keeping it from students and other creditors:

While the Myrhes claimed that school leadership was “fighting for the students,” the testimony of their company’s CFO, revealed in recent court filings by the Minnesota attorney general, shows that the opposite is true: Right after the schools lost their ability to draw down federal tax dollars, the Myrhes enriched themselves by shielding roughly $20 million in assets from defrauded students.

Globe and MSB erased $17.6 million in debt that the Myhre family, somehow, personally owed to the schools. Since the schools owed over $33.8 million in restitution for students based on a court judgment establishing that the schools had systematically defrauded students for years, the Myrhes’ personal loan forgiveness meant that students could be left empty-handed.

Additionally, while the Myrhes claimed they were “not willing to just close up their doors,” behind the scenes they all but ensured that students would be hurt by an abrupt closure by ignoring their mortgage obligations for certain campuses.

During this period, the Myrhes engaged in other questionable transactions, including selling real estate to other for-profit schools they owned (Broadview University, Institute for Production and Recording, and the Minnesota School of Cosmetology), paying themselves executive salaries for running schools that no longer had any students enrolled, and failing to collect a claim under the schools’ directors and officers insurance policy.