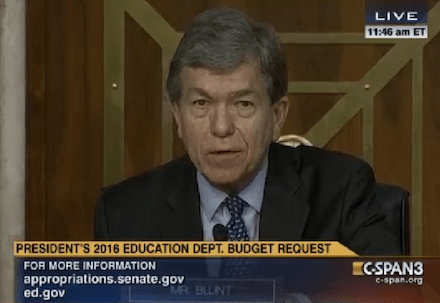 We ought to be talking about … the debt problem when you get out of school. How much of that related to the actual cost of going to school and how much it related to what you thought your living standards should be while you went to school, and I’m pretty confident over the years that the student expectations for their personal living standards in school have often increased where they would have been a few just years ago.

Exclusive video obtained in 2012 by Republic Report of a meeting of the for-profit college trade association APSCU showed an industry executive engaged in similar blaming of students for alleged overborrowing — to buy cars, cover child support, and pay parking tickets — a remark that led to thunderous applause by fellow executives in attendance.

Similarly, when in 2013 I asked a spokesperson at for-profit giant EDMC about a veteran who had incurred tens of thousands in debt at EDMC before dropping out, he said:

Current laws and regulations permit students to borrow more than the cost of tuition and fees up to the maximum loan limits set by Congress. While we cannot limit the amount of debt a student incurs, we strive to provide access to resources that encourage responsible borrowing and repayment of loans.

The predatory for-profit college companies tend to accept no responsibility for their sky-high prices, deceptive enrollment and financial aid tactics, and poor quality programs and job placement records that push so many students deep into debt. They blame their own students instead, implying that the students are pocketing the money themselves to buy Escalades and Cristal.

I have been told by staff members at EDMC and elsewhere that there are in fact some students who do enroll in order to pocket some cash and walk away, but these staff say that the management at these schools recognize the problem and don‘t care, because the school gets its federal aid dollars anyway. Indeed, industry insiders say that some for-profit college recruiters actually dangle the idea of extra spending money as a way to entice wavering students into enrolling — get a new laptop, get some cash. No doubt some students at non-profit and public colleges also borrow extra to cover some personal expenses. But the vast majority of for-profit college students are not keeping any cash – they are turning over their federal checks to the school, borrowing more money in private loans, and often going broke in the process. And in fact colleges already have tools at their disposal to limit student borrowing to what the student actually needs.

In an odd follow-up to his line of questioning, Senator Blunt then asked Duncan to “provide a year-to-year summary of marketing and advertising expenses for the Department over the last three fiscal years, as this relates to a topic I’ve been interested in, whether we should specifically identify that this is a taxpayer funded marketing effort.” Duncan replied, “We don’t do a heck of a lot of it” but promised the data.  Blunt didn’t explain what he was getting at. I’m not aware of what the Department of Education might be “marketing” or of “advertising” run amok. But I am aware that Blunt’s fellow Senators, notably Dick Durbin (D-IL), have long argued that for-profit colleges should not be permitted to use taxpayer dollars for marketing, after a Senate committee report found that big for-profit colleges were getting as much as 90 percent of their revenue from federal funds and spending almost a quarter of their revenue on marketing.

Blunt’s blaming of students came in the wake of Duncan offering a strong case for the Obama Administration’s efforts to curb predatory practices in the for-profit college industry under questioning by Blunt and Senator Shelley Moore Capito (R-WV), each of whom criticized the Administration’s gainful employment rule, which would cut off federal aid to career education programs that consistently leave students with overwhelming debt:

In response to Blunt question on the gainful employment rule:

DUNCAN: Yes. So just to be very, very clear, that this is not just focused on the for-profit sector. There are fantastic actors in the for-profit sector, but there’s some very bad actors in the for- profit sector. And we had to take some action earlier this week and the institution will have a chance to reply. But the findings that we — we’re putting forward are pretty stunning, pretty egregious. And the waste of taxpayers’ money, which I think none of us want to support, none of us can feel good about and leaving young people in a worse position than when they started.

So all we want to do is make sure that young people are getting real skills that lead to real jobs and lead them to a better financial situation. And when young people are taking on massive debt who are already struggling, who are often already in a disadvantaged position and ending up in a worse position because of this, I think we do them a great disservice and I think we do taxpayers a great disservice.

So where there are good actors who are providing real skills and providing a ladder to the middle class, we want them to grow, we want them to prosper, we want them to serve more young people. But where you have actors that are taking advantage of a massive influx of taxpayer resources and actually leaving people in a worse position than where they started, that’s not something I think you or I or any of us should feel good about supporting.

In response to Capito:

DUNCAN: And to be very clear, the vast majority of for-profits are getting 88 percent, 89 percent, 90 percent, sometimes even more of their revenues from you and I, from taxpayers. And so this is massive public subsidy. And if it’s to something leading to better outcomes, I — you know, that’s an honest conversation to have.

But when it’s leading to worse outcomes, we can’t support that. And if you — again, if you look at the findings we put out on one of those institutions this year — I mean, I’m sorry, this week — and again they have a chance to reply. And you know, if we’re wrong, we’ll say we’re wrong. But what we found was stunning and deeply, deeply disturbing, deeply troubling. I just want folks on both sides of the aisle to be eyes wide open on this and to stick taxpayers with this and to leave young — leave disadvantaged folks in a worse position, that’s not what any of us, you know, get up every single day to do that, I don’t think.

CAPITO: All right. No, I agree. I don’t think I’m getting up every day to do that, either.

BLUNT: On gainful employment…. I think under the proposed — you estimate under — the department estimates that approximately 1,400 career training programs serving 840,000 students would not initially meet the standard you’re proposing. Have you thought about whether that means the standard is — I think the standard is — is a three-year out-of-school standard. Would it — would they meet it if it was a five-year out-of-school standard? Are you looking at — at what point these — many or most of these schools might meet the standard, or would they never meet that standard?

DUNCAN: So my honest take on this is that when we are clear — and again, I think this is not a high bar; this is. I would say, relatively low bar — but when we’re clear on that, you see behavior change in pretty significant ways. And these are all projections going forward. Again, we have maximum transparency. Every institution has these — these — these facts. And we think we’ll see more good programs grow, and we’ll see bad programs either change or go away. And we think all of the outcomes — more good programs, fantastic. Bad programs improving, that’s fantastic, or bad programs being eliminated, those are all positive outcomes. So I’m actually pretty hopeful about where this thing goes.