posted at 7:29 pm by David Halperin 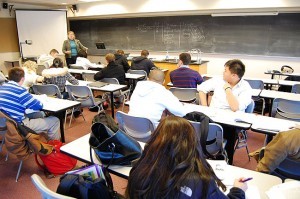 For-profit colleges like ITT, DeVry, Kaplan, and the Art Institutes — sometimes called subprime schools because they leave many students deep in debt while taking billions of dollars from taxpayers — continue an expensive lobbying push to influence Congress and avoid accountability. Republic Report has received a 2011 draft strategy memo by the biggest for-profit college trade association, APSCU, outlining a plan to keep taxpayer money flowing to poorly-performing schools and to derail investigations of fraudulent activity.

A source with knowledge of the industry confirmed the authenticity of the June 2011 draft memo, a “100-Day Plan” for the organization, and said that the memo was an accurate account of APSCU strategy and plans. According to the draft, the memo was requested by the APSCU board chair, Art Keiser, CEO of Keiser University, in the wake of the resignation of APSCU CEO Harris Miller.

The memo was addressed to the APSCU board of directors from Brian Moran, then serving as APSCU’s interim president and now its executive vice president of government relations and general counsel (and also the chairman of the Virginia Democratic Party). (Miller was forced out of the job after a series of missteps, including an ill-advised parody video uploaded to YouTube and reposted by the Democratic blog Blue Virginia.)

While it is unclear who drafted the memo, and it is clearly labelled a draft, those making edits on it included then-senior vice president for communications Bob Cohen, as well as several APSCU staff members who focused on Congress and on federal regulation.  You can read the full document below, followed by our analysis.

In a discussion of APSCU’s legislative strategy, the memo addresses a bill to repeal Obama Administration rules that would tighten standards regarding credit hours and ensure at least minimal oversight by states of schools receiving federal aid.  The memo states, “As directed by House Republican leadership, we will reinforce the traditional sector’s support for the bill with House and Senate.”  The traditional sector refers to non-profit and public colleges, some of whom also opposed these Obama rules. It’s fascinating to learn that not only does the House GOP membership vote with near-unanimity to shield the for-profit college industry from accountability, but that the Republican leadership is so helpful that APSCU sees GOP leaders as “directing” aspects of the industry’s legislative strategy. (This bill did pass the House, with every GOP vote a yes, last month. Former Republican Congressman Steve Gunderson became the new CEO of APSCU in January.)  Another bullet point, referring to other potential legislation, again uses the phrase “as directed by House leadership.” The memo also states that APSCU would back a “House leadership supported legislative vehicle” to repeal the Administration’s “gainful employment” rule, the hotly-contested regulation that would cut off federal aid to schools that repeatedly leave most of their students with overwhelming debt.

The APSCU memo’s discussion of legislative strategy is completely integrated with mentions of electoral matters — that APSCU would continue “relationship building” with the Democratic Congressional Campaign Committee; that the group would “Develop Senate Political Strategy, which identifies 12 competitive Senate races in 2012” and would “aggressively target APSCU PAC giving towards the 12 Senators identified in the Senate Political Strategy.” It appears from the memo that the activities of the APSCU PAC, or political action committee, and the activities of APSCU, which is an IRS-recognized 501(c)(6) trade association, were closely tied. In its IRS form 990 filing for the previous year, 2009-2010, APSCU, then called the Career College Association, answered “no” to the question, “Did the organization engage in direct or indirect political campaign activities on behalf of or in opposition to candidates for public office,” but obviously times have changed. The memo also anticipates planning for the group’s presence at the 2012 Democratic and Republican national conventions.

In addition, the draft memo describes an effort to cope with a widening investigation by state attorneys general of deceptive recruiting, student loan defaults, and other misconduct by some of the subprime colleges. The memo reveals the existence of “weekly APSCU Task Force calls” to address the investigation, and calls for “state attorney general outreach.” It also states that APSCU would seek to “isolate” Kentucky AG Conway, who is leading the bipartisan group of attorneys general investigating industry behavior. (One item on the memo’s agenda was the upcoming July 2011 Conference of Western Attorneys General in Hawaii, where in fact there was a panel favorable to the for-profit colleges; while the panel moderator was Iowa AG Tom Miller, who is one those investigating for-profit schools, all three panelists were representatives of the industry.)

The memo also indicates that APSCU would advance “Project Rose,” the Shakespearean / Orwellian effort, exposed last week in Republic Report, to compel industry members to alter “the vernacular of our sector” by, for example, renaming a high-pressure “call center” an “enrollment-assistance center,” calling a “recruiter” a more sympathetic “counselor,” and stopping use of the term “piece of business” because “applicant,” a.k.a. prospective student, sounds much nicer.

There is even more to consider in the APSCU draft, especially for wonks deeply engaged in the higher education debate.  But all citizens should be concerned about the relentless lobbying of this industry — with high-priced lobbyists like Trent Lott — for policies that allow abuses to go unchecked, that allow the worst actors to get the same benefits as those actually trying to serve students. There are quality programs in the for-profit sector — I’ve personally seen them. But I’ve also met students who were misled and left with worthless credits or degrees and insurmountable debt, and there are thousands of them across the country, people struggling to provide for themselves and their families — low-income people, immigrants, veterans, military spouses. With many for-profit education companies receiving around 90 percent of their income from federal financial aid, and with for-profit colleges accounting for about 13 percent of U.S. college students but nearly half of all loan defaults, it’s time for smart policies that direct federal aid to programs that actually help students to learn and get jobs, rather than programs that ruin their lives.

My attempts to contact Brian Moran of APSCU for comment resulted in a call from an APSCU consultant, who accepted my offer to review the APSCU memo.  But neither she, nor Moran, nor anyone else at APSCU got back to me to discuss, despite followup.  I would be glad to present APSCU’s perspective in a future post if I hear back.