As States Act To Shut Down Deceptive Website, Durbin Says For-Profit Colleges “Own Every Lobbyist” In DC

posted at 1:10 pm by David Halperin 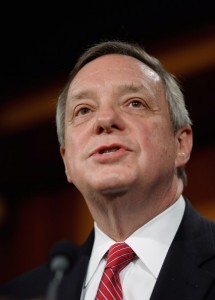 On Wednesday, 20 state attorneys general announced a court settlement with QuinStreet Inc., a marketing company working for for-profit colleges, that will shut down the deceptive website GIBill.com and turn that web address over to the U.S. Department of Veterans Affairs.

GIBill.com, until recently, looked a lot like a government website. But people who went there seeking advice on higher education options were always steered to a for-profit college that paid for the privilege. Deceptive marketing like this, along with coercive recruiting tactics, push thousands of our troops and veterans to shoddy for-profit colleges that have high prices, low-quality educations, high dropout rates, and overwhelming loan debts for students. Many struggling Americans have had their lives ruined by for-profit colleges, but troops and veterans are a particular target for predatory schools because of loopholes in federal law.

Since these bad practices have now been widely exposed, why are even the worst actors in the for-profit college industry still sharing in the $32 billion in federal financial aid that goes to this sector every year? One word: Lobbying.

“It’s reached a point now when you get little or nothing done when you take on the for-profit schools in Congress,” Senator Dick Durbin (D-IL) said at a Washington press conference today announcing the setttlement.  “Why? They own every lobbyist in town.”

Durbin added, “What the for-profit schools are doing to students and their families across America is shameful. What they’re doing to veterans is disgraceful.”

The Attorneys General have stepped up to protect students and taxpayers, as Durbin suggested, because the power of big money lobbyists, backed with generous campaign contributions, has made many members of Congress, from both parties, captives of this industry. Since it’s an industry built on taxpayer money — many schools get 90 percent or more of their revenue from federal student aid — it’s a monster that we created.

The Senators noted that former members of Congress were among those now persistently lobbying on behalf of for-profit colleges.  Conway reported the same about former attorneys general.

When it came time for questions, I noted that at last week’s Las Vegas convention of the for-profit college association APSCU, the group’s chief lobbyist (former Congressman Steve Gunderson) told attendees that critics of the industry were seeking “to advance their political or ideological agenda.” I asked the speakers if they agreed with that characterization, and also asked them to comment on a political culture where former legislators and chief law enforcement officers now lobby to avoid accountability for an industry that seems to be rife with waste, fraud, and abuse.

Biden responded that the issue “is not about politics, it’s about fraud.”  Conway said he personally would not want to lobby on behalf of such interests after leaving office.  He called practices in the for-profit college industry “unconscionable.”

Harkin, who has been leading congressional investigative efforts on these issues, said that fraud and misconduct in the for-profit college industry is “very pervasive.” He described a climate in which even schools who want to do the right thing are drawn into a “vortex” of bad behavior. Blumenthal called it a race to the bottom.

The state AGs charged QuinStreet with violating consumer protection laws. In addition to transferring the website, QuinStreet agreed to pay a $2.5 million fine and to provide better disclosures on its multiple marketing websites that target veterans and active duty military.

APSCU issued a statement saying it “condemn[s] any activity by companies that mislead veterans” — without noting that QuinStreet is an “Allied Member” of APSCU.

QuinStreet was a major marketer of high-interest subprime mortgages, but after that market collapsed, it apparently put its database and knowledge of struggling Americans to use for a sector sometimes called subprime colleges.

Fixing the QuinStreet websites is a start, but there are many more bad marketing, recruiting, reporting, and other practices in this industry, so I hope the AGs keep pushing. I also hope that citizens will get more engaged on this issue, and start asking their members of Congress whether they stand with our troops and vets seeking advancement through education, or whether they stand with wealthy predatory colleges that take advantage of — and crush — people’s hopes and dreams.