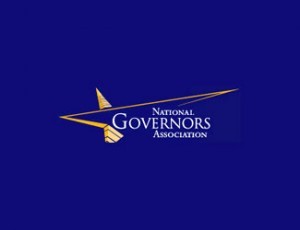 The for-profit college industry contains many schools that regularly scam students and taxpayers. Large for-profits like Kaplan, DeVry, Bridgepoint, and the University of Phoenix spend big lobbying the federal government and providing campaign contributions, and in return the government shovels about $32 billion a year into the for-profit college industry via student loans and grants. These schools often produce terrible results, leaving a large portion of their students in tremendous debt with few job opportunities. Yet thanks to the corruption of our political system by Big Money, it continues to go on.

Back in February, the House of Representatives, in a pledge of fealty to its donors, voted to block a set of Department of Education rules that would’ve done more to hold these predatory colleges accountable. This bipartisan vote was supported by a number of groups, one of them being the National Governors Association (NGA). (Many traditional colleges and universities, including state schools, also opposed these rules.)

The NGA was formed in 1908 to be a place for the nation’s governors to discuss policy issues and represent state governments in Washington, D.C. Its leadership rotates between various governors, and it is a genuinely bipartisan organization.

But twenty-four years ago, big corporations found a way to influence NGA’s policy agenda. In 1988, the organization started the “Corporate Fellows Program,” which is billed as promoting the “exchange of information between the private sector and governors and stimulat[ing] discussion among the Corporate Fellows on emerging trends and factors affecting both business and government.” According to the NGA’s website, the dozens of corporations that are part of this program include everything from private prison profiteer Corrections Corporation of America to drug giant Pfizer.

The NGA’s website says that members give an annual contribution to the organization of $20,000 (a number confirmed to me by NGA staffer Jodi Omear), but this may obscure the true amount of money that these corporations are giving NGA. Its conferences are also sponsored by corporations, with the National Journal reporting that as many as 147 different corporate sponsors “ponied up” contributions to be featured at the NGA’s Winter Meeting in 2012.

In 2009, NGA showed fealty to donors and Corporate Fellows such as DeVry by authoring a report urging community colleges to adopt practices similar to those of the for-profit education industry. “The students’ best interest always comes first…We are gratified by the praise of the NGA and encouraged by their new report,” said Frank Longaker, president of National College of Business & Technology, a major education profiteer, in an NGA press release.

Unfortunately, the for-profit college industry isn’t the only group of education profiteers the NGA has been backing. In an additional show of support for testing and e-technology company donors such as Pearson, Scantron, Wireless Generation (which is owned by News Corporation), Knowledge Universe, Education Testing Service, and others, NGA played a key role in shaping federal “Common Core Standards” which push for an emphasis on high-stakes testing, which is diverting more and more taxpayer money to testing companies and away from teachers, classrooms, etc.

Traditionally, the nation’s schools have been one place where profit took a backseat to the public interest. Now, by heavily funding influential groups like the NGA, some of the nation’s biggest corporations may be on their way of seizing control of education policy for their own profit.